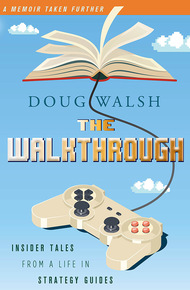 Doug Walsh is the bestselling author of The Walkthrough: Insider Tales From a Life in Strategy Guides, a memoir about his eighteen years in the video game industry. He's also written the award-winning time travel romance novel, Tailwinds Past Florence, inspired by the two years he spent cycling the world. Additional credits include over one hundred official strategy guides for Penguin imprint, BradyGames, and the travel memoir One Lousy Pirate. His work has also appeared in Adventure Cyclist.

Originally from New Jersey, he now resides in the Cascade Mountains of Washington State where, when not working on his next book, he can be found biking and hiking the many trails surrounding his home – provided he's not on the couch, playing Dragon Quest XI.

The Walkthrough: Insider Tales from a Life in Strategy Guides by Doug Walsh

The Walkthrough offers a rare peek behind the curtain of the secretive video game industry from an unlikely perspective, that of a career strategy guide writer. For eighteen years, Doug Walsh was one of the most prolific authors of officially licensed video game strategy guides.

One-part memoir and one-part industry tell-all, The Walkthrough takes players on an entertaining march through gaming's recent history, from the dawn of the PlayStation to the Xbox 360 and Nintendo Switch. Follow along as Walsh retraces his career and reveals how the books were made, what it was like writing guides to some of the industry's most celebrated — and derided — titles, and why the biggest publishers of guidebooks are no longer around.

Walsh devotes entire chapters to many of gaming's most popular franchises, including Tony Hawk's Pro Skater, Gears of War, and Diablo, among others. From inauspicious beginnings with Daikatana to authoring the books for the entire Bioshock trilogy, with plenty of highs, lows, and Warp Pipes along the way, Walsh delivers a rare treat to twenty-first century gamers. The Walkthrough is sure to satisfy the curiosity of anyone who grew up with the works of BradyGames and Prima Games sprawled across their laps.

When I was a kid, I would sneak guides to school, slipping them between the folders and papers of my Trapper Keeper, setting up a textbook as a screen on my desk, and I would read them, like they were stories. Doug Walsh's The Walkthrough is chicken soup for this player's and reader's soul. – David L. Craddock

I sat at an airport bar nursing a hangover after a weekend spent attending ballgames with a motley mob of lifelong friends, each of them single and eager to party. Our annual ritual. Hours earlier, we had bro-hugged our goodbyes and split up to return to our separate corners of the country. I was alone in taking a flight westbound, to Seattle, home to my wife and dogs. My only memory of the prior forty-eight hours was Ozzy Osbourne leading Wrigley in "Take Me Out to the Ballgame."

As I prodded tomato-tinted ice cubes with a celery stalk, a guy in a tailored suit took the empty stool beside me. Hair slicked back, a little gray around the temples, he ordered whiskey. Neat. Or maybe I'm making that part up. I don't remember. Does it matter?

He unbuttoned his suit jacket and launched into the standard litany of airport banalities. Was I coming or going? What brought me to Chicago? How long was I in town? Then, failing to sense my boredom, he asked what I did for a living.

This is where it gets tricky. Though I'd been authoring video game strategy guides for only three years at that point, I'd had enough of these conversations to know my honest response would trigger one of two reactions. The person asking would find it absolutely fascinating, admit to being a gamer, and then barrage me with questions. Or, every bit as likely, they'd emit a dismissive snicker and tell me their kid should come help me one day. I glanced downward and, guessing the guy's shoes cost as much as a first-class upgrade, figured he'd choose option two—and that I'd have to counter by asking how many times his kid had written a two-hundred page book in three weeks.

What followed was an hour of the most thoughtful, intelligent conversation I've ever had about strategy guides with someone who didn't work in this niche industry. He thought it fascinating that games had gotten complex enough to warrant their own how-to books, but seemed to understand why modern software companies wouldn't have the time or resources to create the books themselves. The man asked a number of questions about process, dealing with beta code, licensing rights, and the logistics of multiplayer. Just as I began to think he might have been looking to bankroll his own publishing imprint, he stood to leave. But not before suggesting I write a book about my experiences one day.

And that's what I did, setting to work the morning after the announced closure of Prima Games in November 2018.

The Walkthrough: Insider Tales from a Life in Strategy Guides is a memoir and a love letter. It's a collection of anecdotes and an insider reveal. It's a look back at my life as a gamer, my career writing strategy guides, and the highs, lows, and rewards that came with the job.

For eighteen years, I was one of the most prolific authors of video game strategy guides for BradyGames and Prima Games, with over one hundred guides to my credit. This book is my story.