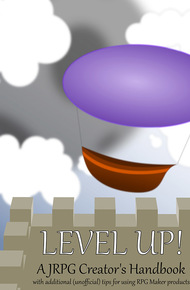 Level Up! A JRPG Creator's Handbook by John Harris

JRPGs are an interesting little subclass of the greater category of Computer RPGs (CRPGs). Recognizable for their excellent presentation and storytelling power, they've been popular since the creation of the original Dragon Quest way back in 1986. If you've ever looked at one and said, "I'd like to make one of these myself," well, you can! Popular software exists that can be used to construct the story-game of your dreams. But just because you can make one, doesn't mean it'll necessarily be that good. That's where this book comes in. It is a collection of essays to help guide you in the design and making of a hobby JRPG of your very own. Because they're as fun to make as they are to play.

I've been intrigued by the RPG Maker suite of tools for years, but it was too intimidating to learn on my own. John Harris's excellent book of tips, tricks, and guides lowers the barrier of entry, and reveals the fun in crafting adventures and systems of your own. – David L. Craddock

Make no mistake, game creation "construction set" programs have a stigma attached to them. Many devs look down upon their use, sometimes unconsciously, and even players scoff at them. There's a whole subcategory of such games on Steam, often derided, by those who do deriding, call them deriders, for being low effort "resource grabs." Truthfully, there are games on Steam of which that could be said.

But to apply that term to all of them is a mistake. Although many construction sets, such as classic packages like Shoot-Em-Up Construction Kit, Stuart Smith's Adventure Construction Set, Bill Budge's Pinball Construction Set, Garry Kitchen's GameMaker, and other such packages, offer only a limited set of options, in some circumstances they can be used to make great work if you stay within the domain of the program. And sometimes you can even escape that domain, with clever ideas, and make unexpected things.

And, it can be a lot of fun to make a game this way. The boring parts that every game must have: its engine, that foundational work of writing display code and simple game logic; the data editors and construction of all those graphic tiles; the process of of getting images to fit together into a cohesive scheme; and the several dozen other minor-but-necessary tasks, a construction set supplies all of that for you, taking you at a stroke from the domain of the generalized computer program immediately to that of the specific genre of game you wish to make. And beyond that, finding ways to make the kit do things not in the design spec, can be an interesting puzzle to solve.

Of these construction kits, the RPG Maker series is probably the quickest way to see your JRPG creation ideas made real. Each version (including the ones we cover here) gives you a very capable map editor, a scripting facility, and an assortment of data editors with which to construct your game. Since you don't have to work on all that preliminary engine work, you can get right into the most interesting part of game creation: brainstorming ideas and realizing them.

The great thing about construction kits, their secret advantage, is that at this stage of production, constructing games itself can be lots of fun. It's like scribbling in a notebook: you can almost freestyle your work, doing what your mood leads you to do, and no one else even need see what you've produced. You could just make a game for you and your friends, with a fraction of the work you would otherwise need. There is real power in that idea. You could made a dozen games in the time it'd take a full team to make one, and you needn't have to worry about organizing or paying that team if you don't have one. You don't have to have profit as your end at all.

Furthermore, I tell you now a kind of secret: the enjoyability of working with it makes RPG Maker a favorite way to work for people in certain internet communities. Some of the games produced this way may actually seem more like day-to-day life simulators, but they allow the player to vicariously experience fandoms, interests and lifestyles that may not easily, or at all, possible for them in real life. If you are in one of these communities, you might consider using it to construct such a game.

For the most part, this book is a series of articles directed toward the hobbyists. If some of this is useful to people who plan to sell their work then more power to you, but the intend is to help people who just enjoy making games on their own.

Whatever reason you've come to try an RPG Maker product, this book is intended as a collection of essays on it and JRPG game design in general. Advanced makers may find a few things here they hadn't known, but it's likely information that they either already had or could find without great effort in one of its web communities. Of more interest to them might be the Appendices, which contain lists of many things, weird concepts and pieces of past games, which may provide ideas to help get your project off the ground, that special extra idea to make them special, and information on things other people put into their games for inspirational purposes, to demonstrate the breadth of the field. The book also contains short histories of both TTRPGs and CRPGs/JRPGs, to give you a sense of where these related genres have been and where they are going, which can be useful in making your own ideas a reality.