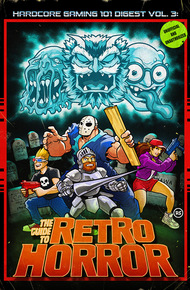 HG101 Presents: The Guide to Retro Horror by Kurt Kalata

Hardcore Gaming 101 is proud to present The Guide to Retro Horror! Within these blood-soaked pages you'll find some of the most famous (and infamous) horror games ever released, from cult classic series Ghosts 'n Goblins, Splatterhouse, Zombies Ate My Neighbors and Nightmare Creatures, to obscure favorites like?Monster Party, Chiller, Project Firestart, Sweet Home, Waxworks, and more! A word of warning, though: the horrifying theme of this book may be inappropriate for young children... and cowards.

Sure, P.T. and Slender are scary, but what of their forebearers? Kurt Kalata traces the roots of the horror genre to their source in this excellent book that'll give readers plenty of ideas for retro titles to play the next time they're in the mood for a scare. – David L. Craddock

In September of 1985, Capcom released their first side-scrolling platformer, Ghosts 'n Goblins (or Makaimura, which translates to "Demon World Village") in Japan. At the time, games of this style were still fairly new. There had been a few successes from other publishers, such as Namco's Pac-Land as well as Nintendo's Super Mario Bros. (released a scant six days prior to GnG), but the genre was far from proven. Leading Capcom's foray into these uncharted waters was Tokuro Fujiwara. Up to this point, his previous credits included Roc'n Rope and Pooyan for Konami, and Higemaru and Commando with Capcom. He would later go on to create the arcade versions of Bionic Commando and Tiger Road.

The plot in Ghosts 'n Goblins is a simple one, inspired by countless fairy tales and adventure stories from ages past. The princess from an unidentified kingdom is being held captive, and a knight in shining armor has to go to her rescue. A brief opening sequence lays out the premise for the player, with the damsel and her hero (identified as Prin Prin and Arthur, respectively, although Arthur is called Sir Michael in an early US arcade flyer), relaxing in a graveyard. That's when Satan, the servant of Astaroth, appears. He swoops down and carries the hapless Prin Prin away, and Arthur immediately dons his suit of armor as he sets off to rescue her.

Six stages of grueling platforming lie between Arthur and Astaroth's throne room, set at the top of a mountain and where Prin Prin is being held. The knight starts out in the graveyard from the opening, which leads into a haunted forest. From there, he must fight his way through a ghost town and into the mountain, through a series of caves (in some places riding floating platforms made up of nothing but eyeballs), over a wooden bridge suspended over lava, and finally up through Astaroth's fortress.