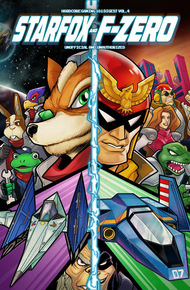 Do a barrel roll!?The fourth HG101 digest focuses on Nintendo's two fast-paced, high-flying science fiction series, Star Fox and F-Zero! Also learn the history of Star Fox with a feature on British developer Argonaut Software, covering the titles that inspired it (Starglider, X) and the games that came after (Stunt Race FX, Vortex), plus an examination of some other lesser known 3D rail shooters like Omega Boost and Vanark. Finally, we've covering some Castlevania fan games, providing an update on the recent Wonder Boy / Monster Boy entries, and adding 11 more Best Games of All Time into the site's canon!

Star Fox and F-Zero are two of Nintendo's most beloved yet underutilized properties. In this book, Kurt Kalata explores the greatest hits of each franchise, and will leave you clamoring for a comeback. – David L. Craddock

What's faster than F-1? Even though F-Zero is part of Nintendo's long list of franchises that are only dug out from their vault for new Smash Bros. characters and trophies, it used to be one of the big names identified with the company in the 16- and 64-bit days. As one of their launch titles for the Super NES, it was a showcase of the system's capabilities as much as it was a sharply designed game, and essentially codified what people should expect from a futuristic racer ? insane speeds, rocket engines, crazy jumps, and murderous race tracks.

F-Zero was not the first sci-fi racer by any means, nor was Nintendo's EAD department acting as a great innovator when designing it. Atari's 1989 arcade game Stun Runner already contained most of the elements that would later become trademarks of the F-Zero series, like boost stripes on the road, jumps, and even features Nintendo only introduced on the N64, as Stun Runner was already made of polygonal graphics. For home entertainment, Nintendo's title was predated by computer games like Michael Powell's simulation-heavy Powerdrome for Electronic Arts and Loriciels' Space Racer, the latter of which used conventional sprite scaling techniques instead. What made F-Zero special was the good old Nintendo playability and clear vision. Stun Runner was a very awkward mix between a racing game and a rail shooter, for one thing. Further, computer hardware in the 80s wasn't exactly up to the task of providing reflex-based experiences. F-Zero, on the other hand, still holds up.