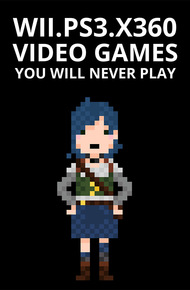 Wii, PS3 and Xbox 360 Video Games You Will Never Play by Unseen64

In 2016 45+ writers and editors from the Unseen64 collective published a physical crowdsourced book to educate the gaming world on the history of video games as an ephemeral art form. There's plenty of examples of what gaming history is losing every day. Now we are re-publishing the whole book into short eBooks - divided into chapters - so even more people could be able to read this interesting collection of forgotten stories, interviews, games and concepts. In this October Story Bundle you'll learn more about cancelled video games planned for Wii, Playstation 3 and Xbox 360.

Pour one out for each of the titles in this book. Once again, the staff at Unseen64 do a fantastic job of thoroughly examining what might have been, and will leave you yearning to play games that couldn't cross the finish line. – David L. Craddock