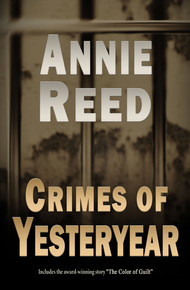 Crimes of Yesteryear by Annie Reed

From Virginia City in the days of the gold rush to the west of the 1950s, from the Great Depression to the fall of the Berlin Wall, these stories of crimes in days gone by will not only chill your blood but touch your heart. Meet a deputy sheriff investigating a vicious murder at a divorce ranch, an elderly man burdened by a horrible secret, and a widow bent on avenging the death of her husband. Get to know a courageous boy just trying to help his family survive and a young man dreadfully afraid he buried an innocent man.

Settle down with Crimes of Yesteryear, a collection by award-winning mystery writer Annie Reed.

I think Annie Reed is one of the best short story writers of our generation. Her work spans genres, and even when she writes narrowly within one, like historical mystery, she covers a wide range of emotions. So this exclusive brand new book is a real treat for all of Annie's fans—and her fans-to-be. – Kristine Kathryn Rusch

The wind, unseasonably hot this late spring morning, picked up the dry, dusty dirt from the cemetery grounds and whipped it around Bo's trousers. The wind never stopped blowing out here, what with no tall pines to stop it, only scrub brush and sagebrush and the sun-bleached bones of stunted trees the desert had sucked the life out of long before Bo Bishop came to Virginia City to make a fortune he'd yet to find. The wind cut through his threadbare shirt and flapped the ends of the bandana he'd tied over his nose and mouth like some bandit out of one of the dime novels he used to read when he'd been a kid.

The novels had made life in the west sound like an adventure. Cowboys. Outlaws. Shootouts in the streets, and the good guys always got the girl.

Then there was the money. Gold in the hills of California just ripe for the taking. Gold in the mountains of the Comstock, and silver in blue-veined mud so common that at first everyone thought the damn stuff just got in the way of gettin' to the gold.

Bo had grown up a poor kid, working on his daddy's farm from sun-up to sundown, too young and scrawny to go off to war like his daddy had. But his momma had taught him to read, and he wasn't too young to read by lamplight and dream of a better—and more exciting—life out west.

His daddy had died in the war, and then his momma got sick and she died, too. Bo left for California the next day before the army could change their minds and take him, too. He'd been eleven years old.

Bo never made it to California. He got as far as Virginia City before what money he'd managed to earn along the way ran out. On the day he dug the grave for the man everyone in town referred to as Frenchie, Bo Bishop had just turned sixteen years old.

He'd hiked a damn long distance to the back of the cemetery—him and Everett, the other man the town hired to dig graves whenever necessary—that dry dirt crunching beneath his boots, before he got to the place where Frenchie would be laid to rest. Didn't seem right, burying a murderer so close to the grave of the lady he'd killed the year before, but not many in town would have called Julia a lady. Everett, who was a good deal older than Bo, called her an "accommodating woman," which Bo supposed was a polite way of saying she did things with men for money that no upstanding lady would ever do.

Bo had never met her. She'd been killed—murdered in her bed, Everett had told him—a month before a snowstorm blew Bo and the wagon full of supplies he'd been hired to load and unload into Virginia City.

"Biggest damn funeral procession this town ever saw," Everett had told him. "Brass band marched through snow and mud and wind cold enough to freeze your pecker right off, and some of them firefighters who took a shining to her, well they marched, too. I heard they even got her a fancy coffin with silver handles. The mines shut down, and the saloons closed up, and the whole town draped itself in black. She was a nice lady, and everybody liked her."

Bo didn't know how much of that to believe. The gospel truth and Everett had never been too closely acquainted, from what Bo could tell. It seemed to him like such a fancy coffin shouldn't have been laid to rest in an unconsecrated grave that only bore a wooden marker with the single name "Julia" written on it.

And besides, if everybody liked her, then why'd somebody go and kill her?

The whole thing sounded like something out of the dime novels. Some story Everett made up to tell a gullible young man. But he wasn't as gullible as Everett thought.

Bo spent his days climbing up the framework of new buildings going up all over the city. He held boards in place and fetched supplies while men older and stronger than him actually built the building. The company he worked for didn't care much in what part of town they built the houses (except for the Chinese part, of course). Bo had worked on respectable businesses and boarding houses, and he'd worked on the cribs and cottages in the red light district. When he was perched up high on the skeleton beams of a new building on C Street, the main street through town, Bo had a bird's eye view of how the respectable women of town treated the "accommodating women" who lived in the red light. He didn't think the respectable women in town would have stood for their men displaying such affection and respect for an "accommodating woman," not even at her funeral.

Just this morning there'd been a hanging, not that Bo had seen it. He and Everett had been busy since dawn hacking at the rocky dirt at the back of the cemetery with pickaxes and shovels. The man who'd murdered Julia—"Duly tried and convicted, the French bastard," Everett had said—was to be buried no more than a stone's throw from the woman he'd killed.

Even this far back at the ass end of the boneyard, they'd heard cheers and applause erupt from the crowd gathered to watch the hanging, and Bo guessed that meant the French bastard was dead. They'd really put their backs into digging then, and got the grave deep enough just in time. Now they were busy filling the hole that held the remains of John Millian, the dumb sonofabitch who'd been stupid enough to get caught with most of the murdered woman's possessions in his room.

Bo bent his back and scooped up a shovelful of dusty, rocky dirt to dump into the grave. Between the wind and the sound of the shovels scraping through the earth, he supposed he could be forgiven for not hearing footsteps on the pathway in front of Frenchie's grave until he caught sight of the woman standing not more than five feet away from him and Everett.

Tall and slender, dressed in a high-necked black dress, the woman had a severe look about her. Her dark hair was pulled back tight against her skull and pinned into a bun at the back of her neck. The wind had pulled some strands loose about her face, which served to soften her appearance somewhat. She stood with her back as straight as the plank boards Bo lifted into place when he worked on them new buildings in town, and her blue eyes were as cold and icy as the worst winter storm.

Even with all that, she was altogether the prettiest woman Bo had ever seen up close.

She didn't say anything in return. She just stood there, the wind whipping her black skirt around her ankles, and stared at what was left of the open hole in the ground like she expected a rattler to crawl out at any minute.

No mourners had come out to the cemetery with Frenchie's body. Bo supposed everyone who'd gone to the hanging was back in town now, celebrating the righteous death of a murderer. The cemetery was deserted except for him and Everett, and now this woman.

After a few more minutes of quiet, Everett cleared his throat. "Ma'am, pardon my asking," he said, "but is there anything we can help you with?"

She raised her eyes from the grave to glance at Everett then at Bo. That one glance told Bo she was not only the prettiest woman he'd ever seen, she was also the angriest. That was saying something considering his mom used to cuss out the chickens something fierce whenever one of them managed to escape from the henhouse.

"No, thank you, gentlemen," she said, turning her attention back to Frenchie's final resting place. "I just wanted one last look at the man they say killed my sister."