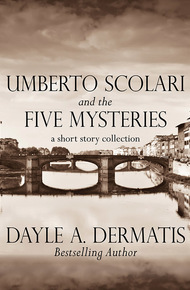 Umberto Scolari and the Five Mysteries by Dayle A. Dermatis

While da Vinci paints and designs machinery for his patrons, Umberto picks up the slack when someone needs a murder solved, a baby reunited with its mother, or help solving other crimes.

Peppered with well-known historical figures and often based around actual events, these five mystery stories bring the Italian Renaissance alive.

It was to be called the Feast of Paradise.

Umberto Scolari, so called because of his tutelage under Il Maestro Leonardo himself, stepped back from the stage and shook his head. The Duke's astrologer had ascertained that tomorrow would be the most auspicious time for the wedding feast, but Umberto took little stock in the idea that the heavens predicted anything.

The heavens couldn't have predicted that the stage, which was meant to rotate, currently did not work as such.

If he believed in omens, he would say that if they didn't fix this, it didn't bode well. Ludovico Sforza, the Duke of Milan, was not a forgiving man.

The Masque of the Planets should be the shining jewel at the Feast of Paradise, and would raise Il Maestro's status even more. Umberto hoped his own status would increase as well; if the noble guests learned he had been Leonardo's personal assistant on the project, perhaps he could find a position with one of them as ingenarius ducalis, or court engineer-architect, just as Leonardo had here in Milan for the Sforzas.

Umberto very much desired to leave crowded, stifling, polluted Milan for airier climes. Anywhere in Tuscany would be an improvement.

He was about to step back onto the stage to adjust one of the zodiac windows when Isabella's chief lady, Chiara, burst into the great hall. Her footsteps echoed as she ran to him, clutching her skirts to keep from tripping.

"Il Maestro," she said, hands on her knees as she gasped for air, "is he here?"

Umberto shook his head. "He has gone back to his workshop." He'd left nearly an hour before to set the apprentices on fixing the broken rack-and-pinion gear.

"Then you must come," she said. "Someone has been poisoned."