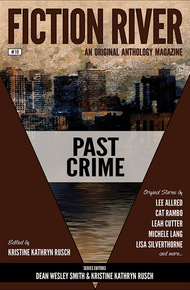 Past Crime by Fiction River

Laws change from culture to culture, decade to decade. Strange laws make criminals of ordinary citizens. Like the Massachusetts woman whose brother asks her for help, slave hunters at his heels. Or the Chinese immigrant who finds himself in the middle of a crooked game of Fan Tan. Or the Native American detective searching New York's Stonewall Bar for a ratfink on the night of a world-changing riot. These stories and more prove that once again, Fiction River's crime volumes have, in the words of Ellery Queen Mystery Magazine, "high quality throughout."

Table of Contents:
"Stolen in Passing" by Dory Crowe
"New World Gambles" by Leah Cutter
"The Bank Teller" by Jamie McNabb
"An Education for Thursday" by Dean Wesley Smith
"The Curious Case of the Ha'Penny Detective" by Lee Allred
"The Horns of Hathor" by Richard Quarry
"Impressions" by Lisa Silverthorne
"The Raiders" by Cat Rambo
"The Monster in Our Midst" by Kris Nelscott
"Blood and Lightning on the Newport Highway" by Elizabeth Castle
"Deathmobile" by Michele Lang
"The Stonewall Rat" by JC Andrijeski

Because I love historical crime stories, I asked some of my favorite writers to give me stories from different eras. Writers from Lisa Silverthorne to J.A. Andrijeski have contributed some of the best short fiction I've had the pleasure to read. – Kristine Kathryn Rusch

Whenever I come up with an idea for an anthology, I have a vision of what I want in that volume. I never get exactly what I imagined.

I'm not complaining. What I imagine is what I would write for the anthology. That's the problem with being both a writer and an editor.

I could be petulant and send brilliant stories back, with a "it's not right for me," and maybe I would if I were editing only one anthology in the next five years.

But Past Crimes marks my fourth solo volume of 2014, and my fifth solo volume since we started Fiction River. (For those of you who don't know, Kristine Grayson is one of my romance pen names.) I have other solo volumes of Fiction River lined up for 2015, and I'm scheming ways to slide in some special editions and non-Fiction River anthologies. So I know that I'll have more than enough chances to get that volume I envision—if I push hard enough.

The volume you hold in your hands is not the volume I imagined when I came up with the title for this anthology. It's better. The story quality here is so high that I had trouble choosing my final table of contents. The stories that I couldn't take were just as good; I simply ran out of room.

Now that publishing has changed so that I can edit without working for someone else or writing a goofy proposal to sell a by-guess-and-by-golly who-the-hell-knows anthology to a big publisher, the editing bug has bitten me hard. I've missed editing. Not the nightmare of dealing with a boss who had a different vision for the magazine than I did and not the strangeness of trying to get writers to commit to write for an as-yet-unsold volume of something or other that might never come out, but the pure joy of finding stories that I love and sharing them with readers.

I especially love asking truly gifted writers to give me stories on a particular topic and then seeing what they come up with.

Some editors write long requirements for their anthologies. No murders with knives, but murders with guns are okay; no dripping intestines, but blood spatter is fine—that sort of thing.

I think that stifles creativity. I want to inspire writers to think about a topic they've never contemplated before or, at least, contemplated in this way.

In March, Fiction River released its first special, also edited by me, called Crime. I didn't title it Mysteries because I like crime stories. Something has gone horribly wrong, but it might be something as small as a traffic ticket. That whole for-want-of-a-nail thing…

The crime volume covered past and present. Someday, I'll do a science fiction volume called Future Crime. We just don't have it on the schedule yet.

Past Crime, however…that phrase evoked something concrete for me, the historical mystery writer, the woman with a B.A. in History, the writer who likes thinking about things that are and aren't any more.

I wanted stories about crimes that no longer exist. Crimes that aren't crimes any longer. Now, that led some writers who tried to write for this volume to tie themselves into pretzels. They felt that they couldn't write about murder (people still kill each other!) or serial killers (they still exist) or pickpockets or, or, or…

And that wasn't my intent.

The end result could be a murder, but the precipitating event had to be based on some historical attitude or law that no longer exists. The obvious one for Americans is Prohibition. Once upon a time, it was illegal to sell alcohol in these United States, and that led to all kinds of mayhem, as M. Elizabeth Castle's "Blood and Lightning on the Newport Highway" so beautifully shows.

But her story also contains murder and all sorts of crimes that still exist, none of which would have happened without the Volstead Act.

I'll be honest: I did fudge with one story. It captured its time period so beautifully that I decided to include it. The paranoia of the moment made the world a different place, and I was willing to overlook a rule to include the piece. And no, I won't tell you which story that is.

This volume contains all kinds of crimes that no longer exist in the U.S., such as slavery, pretending to be someone of a different race, and carrying a gun in the West. But some of the other crimes happen in cultures incredibly different from our own. Richard Quarry's Egyptian tale shows us a world long gone as does Lisa Silverthorne's dark investigation of 18th century England.

Some crimes aren't that distant from us. Drinking in the Stonewall Bar in New York City in 1969 was illegal because Stonewall was a gay bar. The only reason it remained open was because of the protection the owners paid. That's 45 years ago—close enough for some of us to remember, for others of us to touch.

As I went through the volume to put together my final table of contents, I was struck by how very powerful these stories are. Each author managed to capture a different moment in time, and a different attitude toward the world. They also managed to take us on a journey into the darker side of that period, and make us empathize with people long dead who actually had to live in these circumstances.

History doesn't live in dry textbooks. The best history lives in fiction. And some of the best fiction is, in my not-so-humble opinion, in this volume. Enjoy!