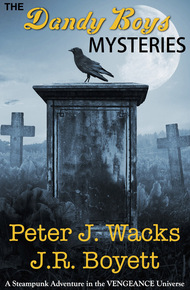 Peter J. Wacks: Throughout the course of his life, Peter has acted in movies, he has designed—and written story-lines for—games, written novels and other fiction, and was nominated for a Bram Stoker Award for his first graphic novel. Currently, he is the managing editor of Kevin J. Anderson & Rebecca Moesta’s WordFire Press.

Over the years Peter has worked on the Cyberpunk Games, on the set of Alias, and is the writing protégée of Kevin J. Anderson. His first bestseller came out in early 2014.

His current project is VilleAnne, a multimedia project being worked on with Steven L. Sears.

J.R. Boyett was born on a rural island in the Puget Sound and spent much of his youth in the heart of Dixie. He enlisted in the U.S. Army at the age of 17, where he served for 5 years before suffering a career ending injury. In 2010 he received his Bachelor of Arts from Pacific Lutheran University and is currently pursuing a Master of Divinity at Fuller Theological Seminary.

A Philosopher and Theologian, J.R. Boyett follows in the long tradition of using fictional narrative to not only entertain the reader, but to examine essential questions about ourselves and the world in which we live.

Set in the Vengeance Universe, a dark steampunk world where Friedrich Von Helsing fights with the Mysterious Brotherhood to protect the world from those that live beyond the shadows, The Dandy Boys Mysteries chronicles the exploits of Friedrich and his coterie in those few years between his departure from Cambridge and the events of which brought him into association with the Brotherhood. Follow the young Fellowship as they struggle to unearth the secrets of conmen, mages, Romani curses, mad scientists, and ultimately walk the path that will lead them to… Vengeance.

TO: All Fellows of the Royal Society of London.

RE: Lost papers of The Fellowship of Adventurer Scholars for the Revelation of Mythology and the Advancement of Natural Philosophy.

Submitted and distributed this 3rd day of June, 1903.

As we, The Royal Society, grow wiser with the times, the importance of papers of seeming scientific nature of this last century must be looked back upon to nurture a greater understanding of our own growth as a society. For although we have seen the wisdom of those past ages, and the wealth of knowledge that has been brought to bear to create not only the great society that we now support and engender, but also the world which we see through eyes informed by the wisdom of the prior days. Knowledge and understanding are at the heart of our society, in our bones, and the very air we breathe.

There have also been such members of the past who have decided matters of folklore and science with an eye to the knowledge of the times, brought about such knowledge through their understanding of the world as they saw it, but that is a knowledge which constantly grows and changes. None may master knowledge, for it is not a thing with a shape, but rather an evolving creature such as Mister Darwin suggested in his Origin Of Species in 1859. Subsequent events have proved that those members have as often decided wrong when they decided for the rejection of papers?as they would have decided right had they not admitted some of the papers which appear now in the Transactions. I shall endeavor to keep this introduction to the subject matter short, and let the papers speak for themselves. Even so, I am burdened by the indecision of where to start with a tale such as this

It is a universal truth that all stories have a beginning. But it is untrue that the beginning and the origin of the story are the same thing. Rarely in the crossroads of lives do beginnings reflect origins. Rather such origins are oft lost, forgotten in the rush of the past toward the present. So it should be noted that while few men are aware of the exploits of The Fellowship of Adventurer Scholars for the Revelation of Mythology and the Advancement of Natural Philosophy (yes, they had planned to shorten the name), fewer still are aware of the events which inspired the inception of this collective. In fact, the phrase ‘obscure repute’ may best describe this society as a whole. There are a few among the Royal Society who are aware of the exploits of this Fellowship, primarily due to the fantastical nature of the accounts, which were submitted to the Society for review and consideration. It is difficult for those who experienced such events to give credence to the events that have been so described, imagine how much more difficult for those who experience them!

It has been documented that this group—better known as The Fellowship of Adventurer Scholars, or more simply, The Fellowship—was formed with the intent of invigorating The Royal Society of London for Improving Natural Knowledge with an energy of discovery and a passion for expedition. It had seemed to them that, while the esteemed members of the Royal Society were the bastions of science and knowledge in this modern age, a certain tendency toward stagnation had insinuated itself within the Society itself, creating skepticism and doubt where once inquisitiveness and wonder had once reigned. For this reason and many others, the Fellowship won no friends within the Royal Society. Rumors of phrasings such as ‘crusty old men’ and ‘more interested in lithographs than discovery’ were said to have been used by the younger men of the Fellowship. Needless to say, the members of the Fellowship were not looked upon with the fondest of airs. These records indicate that several accounts of their exploits were submitted by the Fellowship with the intent of garnering acceptance and membership within the Royal Academy, a scholastic offshoot of the Royal Society. Many within the Society, the Academy and other such staunch institutions have commented upon the apparent short sightedness of the youths, apparent between the insults delivered in offhand conversation about a group they so eagerly sought acceptance from. Others have noted that the passions of youth can explain both extremes. For who has not experienced the heights of youthful arrogance and the depths of a need for acceptance from the elders of a society?

It was understood at the time that one Friedrich Von Helsing aspired to chronicle these affairs, and that he did so under the commission of the office of the Fellowship Secretary. What could not be known then, neither by the Society, the Fellowship, nor young Friedrich himself, was that future events would soon set to upon the mind of this gentleman a perception of petty naiveté amongst those who he so revered which would erode any interest that he once held in such affairs. From such events, it followed that he would instead distinguish himself as an itinerant scholar and raconteur of folklore, rather than as a chronicler of the Fellowship and an exemplary member of the Society. By Royal Society accounts, he would become embroiled in the basest of folklore and superstitions: the supernatural.

Prior to the time of these future events, none suspected the impact that his future actions would bestow upon questions regarding the veracity of the few accounts which he did submit for review by the Society. While no member of the Society questioned the intent of their submission, nor the decency with which they were presented, recent events have caused some to reexamine these accounts in the event that they may indicate the early signs of manic tendency or some other lunacy. Some have said that perhaps it would have served the Society better to consign his stories to a similar fate as those that have been submitted by the unfortunates in Colney Hatch or its concomitant establishments.

This, however, is a not a tale of dusty librarians. Nor is it a recounting of that which is already known. Instead, this is an account of five young gentlemen who set forth to change the world, and the events which inspired their shared venture.