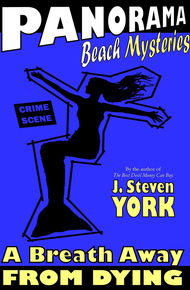 J. Steven York got tired of telling the truth for a living, so he changed his typing style to include lies as a major ingredient, and people seem to like the resulting works. The truth is often still there, but he's sneaky about it. Though he's relatively new to mystery, the most recent story in his "Panorama Beach" series was short-listed for The Best American Mystery Stories 2019.

He's published a fair number of books, he's really lost count, both fiction in multiple genres, and non-fiction, and published hundreds of short stories, articles and reviews. Again, count not available. His short fiction appears regularly in Pulphouse Fiction Magazine, and he is apparently about to start writing a column there as well. He lives on the Oregon Coast with his wife, writer Christina F. York (better known to mystery readers as Christy Fifield).

A Breath Away from Dying by J. Steven York

In 1967, greenhorn Deputy "Mustang" Sawtell may be the last uncorrupted lawman in North Florida. But he's learning the law isn't as black-and-white as he once thought, and if he's interested in real justice, and he is, then rules must sometimes be bent, and truths hidden. Still, that sits rumbling in his belly like a bad oyster. So when he is the first-on-scene to the mysterious death of a beachside-attraction performing mermaid, he isn't willing to let things go when a superior officer rules it an accidental drowning. Mustang knows Mermaids don't drown, and he follows his own trail of love, obsession, envy, and betrayal, the kind that ends in murder.

J. Steven York writes incredibly powerful fiction, but his mysteries seem to go above and beyond the other fiction that he writes. Something about the time period and the setting inspire his imagination. The Panorama Beach series brings back a long-lost Florida with all of its tensions and its uniqueness. – Kristine Kathryn Rusch

I crept past the bigger-than-life concrete mermaid that guarded the entrance to the Aquarama Sea Theater and Dolphin Show, my hand just naturally sliding down to the hilt of my .45, my fingers lingering near the snap on my holster.

Kathy, the dispatcher, had reported an anonymous 'prowler' call, and there had been no answer when she'd called the Aquarama back. There was only one car in the lot. It could have been the prowler's, or it could be an employee on the job early, though if so, I had to wonder why they didn't answer the phone. Maybe somebody there wouldn't let them. Maybe they couldn't. Maybe their phone-answering days were over.

Or maybe nobody was there at all. It was only 8:00 A.M., and shows normally didn't start till eleven.

But somebody would probably be there before that to open, and maybe to give the fish their breakfast.

Behind me, traffic streamed by, headed east on the Beach Highway—tourists eager for escape from summer heat and grim news of race riots and Vietnam.

The front entrance looked undisturbed, but I'd been working out of the Panorama Beach, Florida sheriff's station long enough to know my way around some of the beach attractions. I knew the Aquarama had an employee entrance around the right side, a loading dock on the back of the building, and a couple of service doors on the side.

I'd checked the dock and the side door from the car, and they looked undisturbed. But the employee door was screened from both the highway and the driveways, and to my recollection had a tempered glass window in it, making it a more reasonable place to break in.

Even before I had eyes on the door, I saw broken glass on the sidewalk, little jewels of tempered glass, sparkling against the concrete. Then I heard something echoing from inside the building, like distant laughter.

Any hesitation on the weapon melted away. I unsnapped and drew my Colt revolver, feeling its comfortable weight in my hand. Again, that eerie laughter echoed from inside.