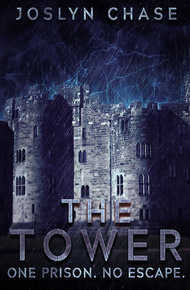 Joslyn Chase is a prize-winning author of mysteries and thrillers. Any day where she can send readers to the edge of their seats, chewing their fingernails to the nub and prickling with suspense, is a good day in her book. Joslyn's love for travel has led her to ride camels through the Nubian desert, fend off monkeys on the Rock of Gibraltar, and hike the Bavarian Alps. But she still believes that sometimes the best adventures come in getting the words on the page and in the thrill of reading a great story.

Joslyn believes in the power of story, and writes a blog on the subject which you can find at joslynchase.com. Join the growing group of readers who've discovered the thrill of Chase when you sign up, and get access to updates and bonuses.

One note of interest: Joslyn is a regular contributor on The Write Practice, a blog for writers, where her articles on the craft of writing are published twice monthly.

The Tower by Joslyn Chase

In the uneasy aftermath of WWII in Bavaria, Laura Schreiner must choose whether to help nurse an American GI back to health.

The decision she makes changes the course of her life, drawing her into a web of evil spun by a man who learned from the masters.

In the face of his cruel obsession, can she free herself from the entanglement of the tower and embrace a life of love and freedom? If you love suspense steeped in romance, you'll revel in The Tower. Get your copy today!

Joselyn Chase is a new voice in mystery. She has a delicate touch, especially with human emotion. She successfully combines two here: suspense and romance. – Kristine Kathryn Rusch

The American was almost dead when the villagers carried him, suspended between them in a scrap of dirty canvas, to my father's house.

If he had died that day, from the bullet or from disease, or at any prior instant during which his survival balanced on knife point, my future would have flowed down a far easier path. Thinking how close I came to missing my own life sends my heart into a slow, cold spin in my chest, yet had I been able to look ahead over the bumps and churning twists and seen the gaping, perilous path, would I have found the courage to continue forward? That side of the bridge, I hadn't the strength or the resilience for such a journey. It was only in the crossing that I gained the fortitude to endure and I thank God for the veil which covered my eyes, making it possible for me to step into the future.

Whatever whims and conquests men take on, the moon continues through her phases, undeterred. Snowdrops and crocuses bowed and faded into the wings as daffodils and tulips took the stage, huddling in circles around birch and pines and spreading over the tender grass in their graceful dance of renewal. The peaty smell of damp, fertile earth fought against the taint of rotted detritus, and I imagined the lemon sun scouring away at the layers of gray.

The hard years of war had ended, but for me—as for most of Germany—the battle was far from over. The tremulous mix of new life and decay which surrounded me seemed to give hope with one hand while wielding a club in the other, threatening to dash that hope at any moment. Life in the streets and countryside of Germany was raw and tenuous, like newly forming skin over a grievous wound.

Everywhere I looked, I saw holes. There were holes in the walls of buildings, dingy and full of rubble. Holes in the streets and in the sagging fences which could no longer hold back the weedy, overgrown gardens. The clothing which hung on crooked lines flapped in a listless breeze, ragged and threadbare. There were holes in every family where husbands, fathers and brothers, called in to satisfy the hungry demands of war, had gone and not returned. Holes in the neighborhoods and towns where entire families had been taken in the night. Fear and bereavement had smashed holes into the entire scenery.

And in every person, there was a hole.

My father, Dr. Schreiner, owned a large house in Burglengenfeld, which he had opened to the transitory wounded, doing what he could to treat their injuries and facilitate their transfer to hospital or home. The guest quarters and several rooms in the main house were given over to this purpose and were presided over by a team of frazzled doctors in the time they could spare away from hospital.

I acted as a nurse's aide. My father trained me, walking me through procedures for cleaning and stitching, setting broken bones, locating and removing bullets from the ruined flesh around them, and other practical skills as we worked side by side.

When I wasn't tending wounds and fevers, I scavenged for supplies, bartering where I could and making unkeepable promises where necessary. The broken men in my care, reduced to the indignities of the bed pan, shriveled by pain and haunted by horrors I could only imagine, generated a need in me, a half-shamed determination to make some kind of difference. It was my own kind of fever.

My twenty-first birthday arrived, and we marked it with a few moments of rest from our labors. To call it a celebration would have been too far a stretch. My father drank an overabundance of wine and grew tearful and morose, his lean face harboring too many shadows. I carved off a few slices of muenster and heated some brotchen which grew hard and crusty on the cutting board while he swirled the dark wine in his glass and lamented the war and Germany's loss; not of her cause, but of her people.

"Hitler was a fool and a madman. A madman! Yes, I shout it. We all should have shouted it. O, Gott im Himmel."

He slammed down his wine glass which cracked and rolled over on its side, a splash of garnet forming on the wood grain. I came around to his side and drew the bottle from his trembling hands, setting it well away.

"Enough, papa. You are acting like a child and it's time all children were in bed. Come."

"There are no children left in Germany! Today you are twenty-one but you have seen enough of a man's guts, of shattered humanity, to last you a lifetime. I am so sorry. I should not have allowed it." He lowered his head to the table, his shoulder blades poking up through the worn threads of his sweater. I watched them twitch and tremble.

"No, Papa." I stroked his back. "It is here, it is real. Shall we pretend otherwise? Would you have me sit idle and hide my face while others suffer and I could help? No Papa, you have given me a gift." I rested one hand on the rough wool at the back of my father's neck. "And how appropriate, since it is my birthday."

His heaving shoulders stilled for a moment before resuming their shaking with an even greater vehemence. He sat up in the chair and he was laughing, wiping the tears from his face.

"Oh, Laura, what a girl you are! What a precious, precious girl."

I nursed him through passing fits of laughter and pain as I helped him up the stairs to bed and covered him with a woolly green blanket. With a hole in one corner.

The wind howled furiously through the night. The next morning, tree branches scattered the yard, but the sky had cleared. Near the neighbor's house, a child's pram had blown over the fence and lay, upended, three wheels spinning listlessly in the morning breeze while the fourth leg jutted out, naked and broken. My father and I hurried past to the guest house.

One of the men had died in the night and two doctors were seeing to the removal of the body. I watched them carry the sheet-covered form to a waiting car, listened to the door click shut behind them. A dirty window let in a bit of sunlight and I found rags and made cleaning solution as my first order of the day. I scrubbed and wiped and polished with a kind of frenzy until father pulled me away to attend to our patients. As I bent over a soldier red with fever from a gangrenous leg wound, a ruckus of outraged voices arose from outside.

"He is an American. Of course he cannot come here. Take him away at once!"

An indistinct murmuring followed and then, "I don't care where he ends up, so long as it's not here!"

I followed my father out the door. Two rough-looking men, haggard with exhaustion, supported a third man between them on a makeshift canvas stretcher. His head lolled back, and the breath shuddered out of him in ragged gasps. On his chest, a set of metal tags glinted in the morning sun, denoting him as an enemy.

My father peeled up one of his eyelids and spoke curtly to his colleague, "Take him into the main house and find him a bed. Laura, you will help me, please."

We finished our morning rounds in the guest house. As we walked the short distance back across the garden, I said, "Papa, is this wise? He is an American after all."

"Yes, and he is a man in need of care. The facts are simple. I am a doctor. The war is over and he is welcome in my home."

The sky shone breathtakingly blue, vivid with a penetrating energy. I felt its intensity marking that moment—the sound of our shoes on the stone walkway, the sun-washed warmth on the back of my neck, the smell of the soil with its new-sprouted life. All these and the simple sentences spoken by my father were stamped in my mind like a sensory photograph.

I marveled at the clarity of it and knew, even then, that I would return to this moment as an anchor in stormy days to come.