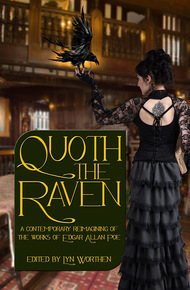 As a freelance editor, Lyn Worthen has helped indie authors polish over six million words of fiction, and her multi-author anthologies have received awards and acclaim from the League of Utah Writers, the Critters Writing Workshop, and the Horror Writers of America. She is a frequent participant in fiction workshops and conferences, both as a presenter and a student of the craft and business of publishing – and a self-described "caffeine-to-text conversion unit," which explains how she gets so much done.

For more information, follow Camden Park Press on Facebook, or learn about her editing services at www.camdenparkediting.com

The works of Poe were dark and often disturbing. From dismembered corpses, rivals bricked behind cellar walls, murders in back alleys, laments for lost loves, obsessions that drive men – and women! – to madness, his stories have had a profound impact on both the horror and mystery genres to this day. In Quoth the Raven, we invite you to answer the call of the raven and revisit Poe's work, re-imagined for the twenty-first century. Here, the lover of mystery and Gothic horror will find familiar themes in contemporary settings, variations on Poe's tales, and faithful recreations of the author's signature style.

Quoth The Raven was on the preliminary ballot for the 2018 Bram Stoker Award. The anthology also won Best Anthology of 2018 by the Critters Workshop Annual Reader's Poll. I couldn't forgo such quality, so I shoehorned it in. – Kristine Kathryn Rusch

Introduction:
The Call of The Raven
Lyn Worthen

Once upon a midnight dreary, while I pondered, weak and weary,

Over many a quaint and curious volume of forgotten lore—

While I nodded, nearly napping, suddenly there came a tapping,

As of someone gently rapping, rapping at my chamber door...

For over one hundred and fifty years, the raven has tapped at chamber doors, flown through open windows, and cast its baleful eye upon us from watchful perches. But why do we continue to grant him admittance, this bird who brings in his wake a cast of dying women, mournful lovers, and scheming murderers?

Is it our own fear of death that makes us such curious observers? Our unfulfilled desires for revenge that find us encouraging Montresor as he leads Fortunato down into the catacombs? Do we find comfort for our own grief in sharing Poe's lament for his lost love? Or is it his ventures into the realms of the mind that bring us back to his work?

For there was a side to Poe that left the macabre behind in favor of the psychological, the pseudo-scientific. Who could read The Unparalleled Adventure of One Hans Pfaall and believe it possible that the same hand penned The Pit and the Pendulum? Who reading Berenice (which you should not do before going to bed!) would recognize the author of The Murders in the Rue Morgue and the creator of Auguste Dupin, the less-famous predecessor of Sherlock Holmes? Indeed, many readers consider Poe the father of mystery and psychological-thriller literature.

From dismembered corpses, rivals bricked behind cellar walls, murders in back alleys, and detectives on the trail of devious villains, the works of Poe were dark and often disturbing, intense and creepy at the same time. They make you question your own sanity (or lack thereof). Yet for all that, his stories have had a profound impact on both the horror and mystery genres to this day.

And then there is the poetry. The melody and beauty of language is manifested so wondrously in poetry, and Poe was a master of the craft, creating poems whose rhymes and patterns are familiar even to those who do not consider themselves to be scholars of the form.

Whatever brings you to Poe, I believe it is the evocative imagery he paints in sometimes hypnotic lines of pen and ink that have captured our imaginations; the sensations of fear, loathing, grief, and despair that have bound his characters to our souls. And I believe it is those same elements that the authors in Quoth the Raven have so thoroughly captured.

Life events prevented me from submitting when Black Mirror Press first announced the idea of an anthology filled with contemporary reimaginings of the works of Edgar Allan Poe, planned for release to coincide with the 169th anniversary of the author's death. So when I saw the notice that Clint and Scott had closed their anthology, I could fully empathize with their decision... And that was when the raven came tapping on my chamber door. "People have already written stories," it whispered. "All that effort shouldn't be allowed to go to waste!" I ignored the raven at first, but it was insistent. I consulted my team, shifted things on the calendar, considered fleeing to a tropical island until the madness wore off. But in the end, I wrote to Clint and Scott, adopting their orphaned project, and put it on the fast-track to publication.

The volume you hold in your hands represents an enormous outpouring of effort on the part of all of the authors involved – and I include those who submitted but were not selected as well. The quantity and quality of the submissions I received was nothing short of amazing. I could have built an entire anthology comprised of reimaginings of Annabel Lee, and the various versions of both The Black Cat and The Cask of Amontillado – and mash-ups of the two – could have filled a second volume. Narrowing the choices to this small set of stories and poems involved many difficult decisions.

In Quoth the Raven, we invite you to answer the call of the raven and revisit Poe's work, re-imagined for the twenty-first century. In these stories, the lover of mystery and Gothic horror will find familiar themes in contemporary settings, variations on Poe's tales, and faithful recreations of the author's signature style.

And when you are finished reading, it is just possible that you'll find the raven has taken his place in your mind and heart as well.