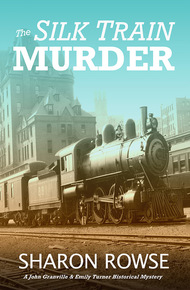 Sharon Rowse is the author of twelve mystery novels, six in the John Granville & Emily Turner historical mystery series (with a seventh in the works), and six in the Barbara O'Grady soft-boiled P.I. series. She has also written a number of short stories in various genres, and is working on a YA epic fantasy trilogy for release in 2020.

Her love of history combines with her love of storytelling in books that seek out unique, forgotten bits of history, melding them with memorable characters in unusual settings. An Arthur Ellis Award finalist for Best First Novel, Rowse's work has been praised as "impressive" (Booklist), "delicious" (Mystery Scene) and "a lot of fun" (Globe and Mail). Learn more at: sharonrowse.com

It's 1899, and the Silk Trains—with their fragile cargo of silk, valued at three quarters of a million dollars—race across the continent to New York. If the thieves don't get to them first.

When his best friend is arrested for the murder of a notorious gangster, gentleman adventurer John Granville is determined to hunt down the real killer.

To save his friend, Granville must dive into the seedy side of the city—the burlesque halls, gambling joints, and opium dens that line reeking mudflats. He finds allies along the way, including Emily Turner, the emancipated daughter of a very Victorian father. But with a fortune in Klondike gold and Chinese silk at stake, no-one is safe.

Set on the Northwest Coast during the Klondike Era—when Vancouver, Seattle and San Francisco were gateways for Klondike gold and Chinese silk, The Silk Train Murder features strong characters and a well-researched and lively story.

Sharon Rowse writes beautifully researched mystery novels that bring the past to life. Her six-book John Granville & Emily Turner mystery series is but one of the series she writes. – Kristine Kathryn Rusch

"Shut the door! It's bleedin' cold out there."

John Lansdowne Granville glanced at the bartender through the smoky gloom and let the heavy cedar door slam behind him. Sauntering over to the bar, he hooked a stool with one foot, pulled it closer, and sat down.

"Whiskey, straight up," he said in a voice that sounded gravelly even to him.

The shot was placed none too gently on the counter in front of him, but Granville needed that drink and didn't much care how it came. He lifted his glass in a silent toast to all those who'd prophesied he'd come to no good, grinning at the look his gesture earned him from the scrawny bartender.

The man had to be used to the odd eccentricity in his guests—this wasn't exactly the finest of hostelries. In fact, not only was the Beaver Tavern the dreariest, most down-at-heels bar he'd seen since he left the Yukon, it was the worst he'd seen on the bleak streets lining the Vancouver docks. Noisy, dim, and crowded, the place fit his current mood perfectly, not to mention his pocketbook.

With only enough money left for a meal or a drink or two, he'd chosen the whiskey. And he planned to enjoy it. Unbuttoning his heavy coat, he brushed the snow from his face and beard, then tossed back the shot. The bartender was still watching him, eyes narrowed and suspicious. He looked rather like a ferret, all sharp angles and twitches.

Granville hid another grin, well aware he looked grimy, unkempt and penniless. Which he was. There was no sign of the gentleman he'd been two years before. But he'd made his choices, and didn't regret them. He could live without the endless social parade, sleeping till noon every day and having a perfectly starched cravat—though being dead broke and having holes in his boots was becoming tiresome.

Behind him, the door opened with a blast of cold, salty air and the clattering of wagons over cobblestones. A large man swept up to the bar, shaking snow in all directions.

"Damn, it's freezing out there. Barkeep!" the new arrival hollered, banging on the bar with a meaty fist.

Granville froze at the sound of that voice, staring at the broad face, bushy black beard, and deep-set brown eyes reflected in the tarnished mirror behind the bar.

He'd last seen his former partner more than three months earlier as they'd bade each other safe journey in Skagway. He'd been returning to England to make peace with his father and Scott was headed for Seattle. The big American hadn't changed a bit, except he looked better fed. But what was he doing here?

Reflexes honed fending off gold-hungry claim-jumpers obviously still worked. Scott sensed he was being watched. He stilled, meeting Granville's gaze in the mirror with a hard stare, followed by dawning recognition. A grin split the thick beard and Scott turned, clapping Granville on the shoulder with a vigor that nearly knocked him off his stool.

"Granville, you scoundrel! Never thought I'd find you here! What happened? Jolly old England not quite so jolly?"

How to answer that one? With a shrug, Granville decided not to try and signaled for two whiskeys.

"What, you don't talk any more? Never thought I'd see the day!"

Granville lifted one of the glasses that had been plunked down in front of him. Ignoring the bartender's obvious curiosity, he slid the other glass along the bar to Scott. "You're thinking of yourself, old man," he said. "Cheers."

Scott grinned broadly, shook his head, and downed his own drink. "I know who got called the Klondike storyteller and who didn't. What's the matter, your tongue still frozen?" Scott laughed, then turned so he directly faced Granville. His expression sobered. "By Saint Christopher, Granville! What in hell's wrong?"

Too much traveling with too little money and too little food, then the news that his father was dead, Granville thought. But this wasn't the place to talk about it. And besides, he wasn't nearly drunk enough yet.

Granville downed the rest of his whiskey and signaled for another round. "You know how it goes."

Scott studied Granville's face. Ignoring the bartender's interest, he cancelled the order with an abrupt wave of his hand and threw a coin on the bar. "I could use a steak, a thick, bloody one. How about you?"