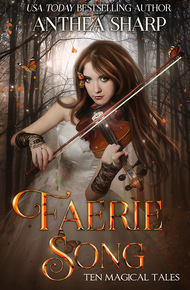 Enter the magical Realm of Faerie in these ten enchanting tales, including the award-winning The Sea King's Daughter, plus a brand new tale featuring music, magic, and the dangers of misusing the powers of the fae!

Beneath the Knowe - Can music overcome fey magic? A brave young woman must bargain with the faeries to save a stolen-away child.

Fae Horse – The answer to one's prayers is sometimes a Nightmare…

Under the Faerie Hill – A harper must spend the night in the faerie mound. Will he emerge mad, or gifted with faerie inspiration?

Goblin in Love – A bittersweet tale of love and sacrifice set in the Dark Realm of Faerie.

Breaking the Brownie Code – When a brownie is seen by humans, she must pay the price.

The Sea King's Daughter – An award-winning retelling of The Little Mermaid, set in ancient Ireland.

Music's Price – A boy in modern-day New York sees faeries whenever he plays the cello, and must come to terms with his ability and its consequences.

The Tree of Fate and Wishes - On the eve of war, a young woman beseeches the faeries for help.

The First Adventure – Never suspecting that a new high-tech game has opened a gateway to the Realm of Faerie, a young woman makes a disastrous bargain.

Faerie Song – A magical retelling of the Pied Piper story, with a faerie twist…

Anthea Sharp's Faerie Song: Ten Magical Tales contains stories about magic, music, and the fey. Several of her tales incorporate elements from traditional ballads and songs, and Anthea's love of music (she plays⁠—and sings!⁠—Celtic music) is evident throughout this beautiful collection. – Jamie Ferguson

The surface of the North Sea rolled and ruffled quietly beneath the May wind. In the sky overhead, gulls caught the eddies, calling in high, lonely voices. The rocky shore of Eire rose on the horizon, a dark blur of land before the water stretched away for thousands of miles to the west.

Beneath the waters, the calm beauty of the day mattered little. Pale sunshine filtered down, and further down, to the very halls of the Sea King, where the matters of the world above meant very little. His palace rose from the sea bed, whorls of shell and pearl glowing with iridescence. Four fanciful towers, one for each of his daughters, were decked with banners of woven sea grass that waved in the gentle eddies

The open, curved halls were traversed by fishes and merfolk alike on their way to the throne room for the birthday celebrations of the king's youngest daughter, Muireen.

This was not any birthday, however, but the coming of age Muireen had been waiting years for. Finally she was turning seventeen and would be allowed to rise to the surface for her first glimpse of the mortal world.

Six years earlier, her eldest sister Aila had been the first of them to break the surface of the bright water and see what wonders the world above held.

"Tell us, tell us," her sisters had clamored when she returned, then listened, wide-eyed, to Aila's descriptions of the wheeling birds, the bright sun, the taste of air in her lungs instead of water.

She had even glimpsed a mortal ship riding majestic over the waves, all unaware of the kingdom they traveled over. Although her bodyguard had not allowed her swim any closer, for fear of discovery, Aila had heard singing, and a strange buzzing instrument not known beneath the sea.

The next sister to rise, Dagmar, had shaken her head dismissively upon her return.

"It's gray and cold," she'd said. "Water spits in cold drops from the sky, and the bones of fish float, rotting, in the waves. There is no reason to visit the world above."

"What of the mortals?" Muireen had asked.

"I saw no sign," Dagmar said, flat disinterest in her voice.

When the second-youngest sister made her trip to the surface, she proclaimed it "quiet and a bit boring."

Privately, Muireen vowed that she would swim toward shore. She would stay from dawn to dusk and do everything she could to catch a glimpse of the mortals who inhabited the world of air. Whether or not the guards that would accompany her would allow such a thing was a question she pushed away. Her determination was strong enough to succeed.

For years, Muireen and her sisters had scavenged the shipwrecks scattered on the ocean floor. But while her older siblings had lost interest, Muireen still was fascinated by the strange objects to be found in the detritus. She could not make heads nor tails of many of the items, but whether they were weapons or decorations or strange tools, they piqued her imagination.

"Why can we not visit the surface more than once a year?" she'd asked her father. "Surely we can learn things from the mortals above."

"No," the Sea King had said, his voice hard. "The only thing they may teach our kind is death and destruction. Our history is filled with tales of murder, the blood of our people staining the currents while they hunted us down without mercy. Once a year is danger enough."

Only the weight of law and custom kept her father from forbidding all merfolk from ever rising to the surface.

Today, though, was her day. Muireen's heart beat faster. Today, she would feel the mystery of the sun on her face, breathe the strangeness of air, hear the sounds of the birds.

And maybe, if luck was with her, she would set her eyes on a mortal.