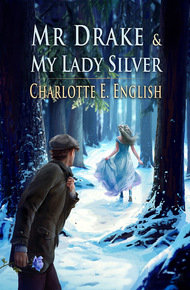 English both by name and nationality, Charlotte hasn't permitted emigration to the Netherlands to change her essential Britishness (much). She writes colourful fantasy novels over copious quantities of tea, and rarely misses an opportunity to apologise for something. A lifelong history buff and Jane Austen fan, the Tales of Aylfenhame series combines her love of Regency history with her deep appreciation for fantasy, whimsy and magic — and all things fae.

Mr. Drake and My Lady Silver by Charlotte E. English

In the frozen depths of winter, 1812, Phineas Drake struggles to make ends meet. Wearing away his youth making plum-cakes for the people of Lincoln-on-the-hill, he dreams of a better life.

Out of the faerie realm comes Lady Silver: beautiful, angry — and determined. Desperate to reverse an ancient curse, she will stop at nothing to find the traitor, the hobgoblin Wodebean.

Together, princess and baker's boy make a formidable team — and so they must, for their quest will take them deep into the lawless depths of the Hollow Hills...

Charlotte English's Mr Drake & My Lady Silver is a beautiful, engaging tale about curses, predicaments, magic, and love. Pour yourself a glass of ice-wine, grab a cloudy starcake with jelly pearls, and enter the world of Aylfenhame. – Jamie Ferguson

Woah there, hold yer horses! Literal-like, I ain't using a figure o' speech. There, thas better, now we can have a comfortable coze for a minute or two. I won't invite ye t' get out o' yer carriage, not in weather like this! Has it been snowin' all yer journey through? Yer brave, t' make it all the way t' Tilby in this muck. Oh yes, I do live under the bridge. All the way under! Aye, I thank ye, it's cosier than ye might expect. Mayhap I'll show it to you, sometime.

Seein' as the weather's so foul, I won't charge me usual toll t' pass the bridge. Nay, don't thank me. I may look fearsome, but there's nowt t' fear from this old troll. Ask anybody in these parts, they'll tell you right enough. Old Mister Balligumph, ye've no cause t' be scared-like o' him.

I do talk on a bit, though, no denyin' that. But what's better than a tale t' liven up a chilly winter's afternoon? Comin' from Lincoln-way, are ye? I know a fine tale from them parts. Took place not so long ago, in point o' fact. Care t' hear it? It won't take long, an' with just a little magic — there! — ye'll find yer carriage plenty warm an' snug fer the duration. Nay, don't thank me.

All right, then. This tale is about a young chap wi' the fine name of Phineas Drake. He worked in his father's bakery-shop, and 'twas on a day rather like this one tha' some strange events came t' pass. Come to think of it, 'twas Winter Solstice, an' very almost Christmas…

The cathedral bells chimed the fourth hour of the morning, and before the ringing sound had died away, Phineas Drake was out of bed and shivering in the piercing cold. He washed with haste, breaking the ice which coated the surface of his wash-basin to reach the frigid water beneath, and dressed as quickly as he could with fingers that shook with cold.

He crept onto the landing and down the stairs, mindful not to incur his father's wrath by waking him at such an hour, and hastened into the kitchens at the rear of the building. Everything was already laid out for him: bags of flour, pungent yeast, great basins to mix the dough in, and ewers of water. He had only to begin, and this he did with all possible dispatch, for while the shop would not open for a few hours yet, he would need every minute of that time to prepare the day's wares.

He set the great stone ovens afire first and stoked them well, for one long counter-top was crowded with wads of dough left to rise overnight, and ready now to be shaped and baked. These would make the morning meal for many of the workers of Lincoln, whose labours brought them out of bed at an early hour, and whose morning could be a little brightened by a fresh loaf.

Two hours flew by as Phineas formed loaves and rolls, mixed dough and ferried bread into the ovens. Then came the difficult part. While the final batch of the morning's wares was in the oven, he would have to leave the bakery in order to make his first deliveries: sugared plum-cakes and mince pies for those already living in happy anticipation of the season's festivities, and inclined to begin a little early. Phineas spared a thought to wish, as he frantically packed cakes and pies into boxes, that his father might spare the coin to hire a delivery boy. Phineas might then be able to resign the freezing duty, and properly tend to the ovens instead. Wishes proving as futile as ever, he abandoned the dream and set out into the snow.

Darkness still shrouded the city, and few were yet stirring abroad; he had a quiet, cold walk up to the top of the hill and into the Bail. The black skies were empty of snow, but a great deal had fallen overnight. It soon saturated the thick leather of his boots, and the wet cold seeped through to his toes.

Quite the largest plum cake he had ever made went to the Porters' household on Newport, and three boxes of mince-pies to smaller houses along the way. By the time he had retraced his steps and passed back towards the Cathedral, he had only one box left: a meagre parcel with a small cake, two pies and a fresh loaf for the Trent sisters on Pottergate. Miss Trent would be waiting to accept it in person, however early the hour, and Phineas hastened along, mindful both of Miss Trent's eager anticipation and of the bread still baking at home. The cathedral loomed to his left, dark and silent, its spires glinting with the soft light of a moon not quite set. There was no sound save the crunching of fresh snow underfoot and therefore, Phineas was doubly surprised to discover that he was not, after all, alone.

A woman hurried through the darkness some little way ahead of him. She was almost running, splendidly oblivious to the inclement weather, except to keep pushing her wind-tossed hair out of her pale face. That hair was beautiful, but strange: a tangled cloud, too pallid for her apparent youth, for her frame was lithe and her movements sprightly; this was no elderly lady. She wore only a thin gown of some gauzy substance, its style not at all after the fashions of the day, and an airy cloak which streamed uselessly from her shoulders. How she had not already frozen to death was the thought uppermost in Phineas's mind, until she swept past him — without seeming to notice him — and he saw that her ears were curled at their tips.

'I—' said Phineas, but she had not been addressing him, for she ran on, heedless.

Phineas wondered if he had, perhaps, fallen asleep over the warmth of the ovens and merely dreamed his expedition abroad; it would not be the first time if he had. He opened the lid of the Misses Trents' box of cakes and inhaled, filling his nose with the scents of brandy-soaked fruit, and sugar, and bread. Too rich to be dreamt, all that, and oh dear, that meant the lady was real, too, however peculiar her ears, or her attire, or for that matter her conduct. 'Madam?' he blurted, and set off after her. 'M'lady? Pray, pay some heed to the weather! You will catch your death of cold!' He was half-frozen himself in spite of his sturdier garments, and his lips were numb; the words emerged in stammers, half-garbled, and the winds perhaps stole whatever coherence was left, for the lady did not stop.

Clutching his box to his chest, Phineas followed, uncertain how he was to help but unable to abandon her to the merciless cold. She flitted through the silent streets, always ahead of him no matter how fast he moved, and darted into the sloping mouth of the Greestone Stairs.

By the time Phineas arrived at the top of the hill, she was already halfway down it, almost beyond his sight. He frowned, bemused, for there came a flicker of movement which did not seem to belong to the lady, and even in the pale moonlight he could discern traces of richer colours which made no part of her attire: crimson, perhaps, or purple. It was a mantle of some sort, he would have said, worn by a man of stooped posture, for he was remarkably small. But it could not be another person, for the shape abruptly vanished, as though the mantle and its wearer had turned a corner, or passed through a door.

The street was lined on either side by impassable walls, and there were no doors there.

'M'lady?' he called again, desperate now, for a light snow was once again drifting serenely out of the leaden skies and her arms were bare from elbow to wrist. Had she come, perhaps, from some dinner engagement, and forgotten to collect her warm cloak and bonnet as she left? 'If you are in need of aid, please consider me your servant!'

And, at last, she heard him, for she came to an abrupt halt upon the hill and turned. She stared at Phineas, eyes wide and surprised, as though it were he and not she whose behaviour might be considered bizarre.

'I am sure I can help,' he said, approaching more slowly, for her manner held something of the startled deer, and he did not wish to frighten her. 'Perhaps I might offer you my—'

He broke off, for though her gaze had met his for a mesmerising instant, and held, she had not spoken so much as a syllable in reply. She had turned her back on him again, and taken a step, and… she was gone, just like that, as though she, too, had stepped through a door.

Phineas approached with caution, step by step, until he stood in the very spot the lady had occupied moments before. There was no sign of her, and no apparent means of exit; the icy slope rose behind him and fell away ahead, empty. Naught remained of her save a set of small, narrow footprints in the snow… and something else. There came a glitter near his right boot, and a blush of soft colour.

Phineas stooped, and found a rose. It was in full bloom, somehow, defying winter with the same insouciance as its mistress. Its petals were lavenderish, though so thickly crusted with frost that little of the hue still showed.

It was only after Phineas had made his belated delivery to the Trents, and retraced his steps home, that he discovered just how unusual the rose was. For, when left safely upon the windowsill in his own small room — a chamber by no means warm, but much milder in temperature than the freezing winter outside — it lost none of its coating of frost. It glittered on, white and crystalline; and when, wondering, he picked it up again, a faint, sweet fragrance teased his senses.

'Sugar?' he breathed, unbelieving. But this surmise he discarded, for when he touched the tip of his tongue to one delicate petal, the frost was icily cold, and the flavour that filled his mouth was not sugar at all.

He set the rose carefully down and stood a moment in thought, as though a prolonged scrutiny of the mysterious flower might persuade it to surrender its secrets. But no answer could he find to the puzzle of the vanishing lady, or to the frosted rose, or to the door that wasn't there.