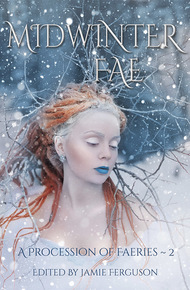 Jamie focuses on getting into the minds and hearts of her characters, whether she's writing about a saloon girl in the American West, a man who discovers the barista he's in love with is a naiad, or a ghost who haunts the house she was killed in—even though that house no longer exists. Jamie lives in Colorado, and spends her free time in a futile quest to wear out her two border collies since she hasn't given in and gotten them their own herd of sheep.

Dance with the Fae on the shortest day of the year!

On the day of the shortened sun
A battle between two kings has begun.
The old year dies, and the Oak King rules
We celebrate with logs of Yule!
But the Holly King is defeated, not dead
To Caer Arianrhod he heads.
Until Midsummer, when they battle again
And the Holly King will once again reign…

Midwinter Fae, the second volume in the anthology series A Procession of Faeries, brings you nineteen tales of magic, beauty, wonder...and sometimes danger, as the Fae can be unpredictable, and follow their own rules.

Ride along with a motorcycle gang of people who were stolen by the Fae as children. Dance with an ice-skating fairy who can fly through the air, try to outrun the Wild Hunt on a dog sled, and watch out for those who slip into our world from the sideways places. And if you hold a seance on the solstice, be very, very careful what you ask for...

Enter the realm of Faerie at Midwinter in these nineteen tales of enchantment!

The Stories
"The Madness of Survival" by Dayle A. Dermatis
"Summerland's Paladin" by Diana Benedict
"The Ice Skating Fairy" by Leah Cutter
"Treasure" by Leslie Claire Walker
"Winternight" by Eric Kent Edstrom
"First Rays of New Sun" by Ron Collins
"At the Heart of Trickery" by Rei Rosenquist
"A Squalor of Chickens" by Karen L. Abrahamson
"By Winter's Forbidden Rite" by DeAnna Knippling
"Passage" by Anthea Sharp
"Midwinter Run" by Marcelle Dubé
"Faery Unpredictable" by Deb Logan
"The Stars of Neverwhere" by T. Thorn Coyle
"The Kiss of the Horned God" by Jamie Ferguson
"Destiny" by Kristine Kathryn Rusch
"Holly vs Oak" by Rebecca M. Senese
"A Last Meal for the Holly King" by Stefon Mears
"Bride Thief" by Brigid Collins
"The Giving Year" by Alexandra Brandt

Midwinter Fae is a collection of short stories about faeries and magic set at the time of the winter solstice. Will the Holly King, who signifies the old year and the shortened sun, be defeated by the Oak King? Or will winter reign eternal? – Jamie Ferguson

Let it never be said that Chelsea Hewitt was a poor friend.

Though her heart writhed like a trapped squirrel, Chelsea gathered the full skirts of her bridesmaid dress—that's all it is, she kept reminding herself—and hobbled in her stockings over to the full-length mirror on the far side of the venue's dressing room. She let the skirts fall, then smoothed them down with hands that had gone clammy.

She was afraid to look, even though it wasn't actually a wedding dress. It was, but it wasn't.

She wasn't endangering herself by going along with this ridiculous tradition for Jennifer.

Like any good bridesmaid, Chelsea had gone to the bridal salon with Jennifer and helped her friend pick the perfect dress. But when Jennifer requested she get fitted for a second gown of the same style, Chelsea had suffered a split-second mini-panic.

"Did you forget who you're marrying?" Chelsea had asked as the seamstress looped a measuring tape around her. And did you forget how I bawled on your shoulder while you helped me burn the few photos from my disaster of an attempted wedding?

"It's a family tradition," Jennifer had explained. "The ladies always have their attendants dress the same. It confuses evil spirits bent on stealing brides away on their special day."

"Danny's attendant will wear a tux, just like her. Please, Chels, I know this is a big ask after Alexa's vanishing act. But you're my best friend. I don't want anyone else standing with me, or wearing an equally gorgeous dress on my day."

It was for sure the hugest ask Chelsea had ever been dealt. And if it had come from anyone else, Chelsea would have told them where to shove their extra wedding gown.

Taking a shaky breath, she forced herself to look at her reflection.

The white dress fit better than she'd expected. Oh, she hadn't doubted the seamstress would do good work, but still. She twisted about for a better look.

This one suited her more than the one she'd worn three years ago, although that one hadn't puckered slightly at the front. Then again, she hadn't been wearing a ring from a long-broken engagement around her neck just yet.

The old burn of humiliation flared in her chest, and loneliness echoed in all her empty spaces, but she put a hand over the lump of the ring in her bodice, re-gathered her strength, and shoved the doubts deeper inside herself. Jennifer was the bride today. She needed Chelsea to keep it together. The dress suited Jennifer, and it was mere coincidence that it worked for Chelsea's build as well.

Of all Chelsea's friends, Jennifer alone had never judged her for holding onto the ring Alexa had given her. That in itself made Chelsea more willing to break her own vow never to don a wedding gown again. And with the way Danny and Jennifer constantly batted their lashes at one another, she didn't have to worry about anyone being left at the altar today.

Chelsea was happy for them, and she was honored to stand up for them. But she wished it wouldn't make her so aware that there was no one batting their lashes at her anymore.

Enough beating herself up at the mirror. Just because Alexa had done a runner on her didn't mean some other woman wouldn't recognize what a gift Chelsea's affections were, and said woman wouldn't feel the need to pressure her into trying another walk down the aisle.

Nodding to her reflection, she adjusted her bodice so it lay a little flatter, slipped her shoes on, and called to the photographer who waited to take her pre-ceremony photo.

"Then do emerge." The voice was not the photographer's, but an unknown woman's. Its melodic tones warmed Chelsea's ribcage like a gulp of mulled wine, but also sent shivery prickles rushing over her skin.

Following the voice took no effort. In fact, even though Chelsea stood in the hallway, she couldn't remember leaving the dressing room.

The photographer lay slumped against the exposed brick wall. A woman stood over him, turning his camera over in hands that crawled with frost.

The moment Chelsea appeared in the hall, the woman lifted her eyes from the camera. Her gaze drove into Chelsea like a blast of wintery night air, slicing her to bits with frosted edges. A hunger lingered in the darkness of the woman's eyes, insatiable, a void that intended to pull Chelsea in whole.

She wanted Chelsea. More than that, she desired her.

The woman let the camera clatter to the floor, and the lens broke with a sharp crack. But Chelsea found she couldn't flinch.

This woman was not human. The knowledge frightened Chelsea, made her throat burn with the need to scream as she fought to recoil from the woman's fingers, which curled as if to caress her face. It made her breath turn cold in her lungs as the word faerie drifted into her mind.

But Chelsea's blood stirred like it never had for Alexa, even in their good days.

Tall and willowy, the faerie woman wore a flowing, silvery garment with white fox-fur trim that sparkled with icy crystals. Her hair, black as a veiled night, hung loose, but a laurel of holly and mistletoe held it out of her alabaster face. The same frost that covered her hands curled over her sharp cheekbones and along the edges of her lips.

From the chapel behind Chelsea came the strains of the chamber quartet warming up.

"What is your name, mortal?"

Chelsea tried to break free, willed her mouth to form any word but her own name. But her body was not hers to command, and the harder she fought it, the tighter the chains of the faerie woman's power wound about her, until…

The relief of giving in wrenched a sigh from her. Why had she struggled so, and against one who saw what a lovely bride she made?

This was what she'd been wanting ever since Alexa abandoned her.

Unfurling a flirtatious smile, she stepped closer to the beautiful woman. "My name is Chelsea. What's yours?"

Quick as a snake striking, the faerie snapped her outstretched arm around Chelsea's neck and ground icy fingers into the back of her skull.

Chelsea had no time to scream before, with a sickening lurch of movement, she found herself somewhere else entirely.