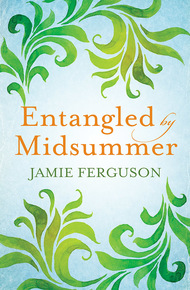 Jamie focuses on getting into the minds and hearts of her characters, whether she's writing about a saloon girl in the American West, a man who discovers the barista he's in love with is a naiad, or a ghost who haunts the house she was killed in—even though that house no longer exists. Jamie has edited over a dozen anthologies, and is a member of the Uncollected Anthology, an urban and contemporary fantasy author collective. She lives in Colorado, and spends her free time in a futile quest to wear out her two border collies, since she hasn't given in and gotten them their own herd of sheep. Yet.

Entangled by Midsummer by Jamie Ferguson

Bound by betrayal, entangled in enchantment.

Mark is living a selkie's worst nightmare: the enchanted skin that lets him turn into a seal has been stolen by his wily human lover. Now he's trapped on land, slowly losing his mind as his chances to return to the sea slip away.

His only hope? A faery woman named Merenna.

But Merenna has her own problems. She's hiding in the mortal world to escape the most dangerous lord of Faerie—a man whose ambitions would make her his bride and his pawn. Now his minions have caught up to her, and Mark finds himself entangled in the deadly power games of faeries.

It will take every bit of skill, cunning, and luck Mark and Merenna possess just to stay ahead of their pursuers. The net of intrigue closes in around them as Midsummer approaches—a time when vast forces align, sinister plans come to fruition, and destiny itself can be rewritten.

Entangled by Midsummer, by Jamie Ferguson (me!), combines elements from Celtic mythology with intrigue and danger. I love to put my characters in situations where they have to make hard choices, and when you throw in faeries, magic, and ambition, the consequence of failure becomes deadly. – Jamie Ferguson

It must have been years, maybe even decades, since anyone else had been up in the attic of Katy's house on the Oregon coast—which made it the perfect place for Mark to hide the thing that mattered more to him than anything else in the world—his sealskin.

Mark pulled himself up off the last rung of the rickety ladder that led from the second story of the little Victorian. He was happy to be on the much more reliable attic floor. Dust sparkled in the beam of sunlight that shone through the tiny window in the gable. He wiped his hands on his jeans and tried not to sneeze.

The airy space was filled with a random assortment of things: dried flowers, a large collection of umbrellas, rolled-up rugs, piles of clothes and blankets, a child's high chair, a wooden trunk. Everything was covered with a layer of dust. The dust was so thick he couldn't clearly make out his previous footprints on the floor, even though he'd walked across it less than a month before.

Mark had had a fun few weeks with Katy since he'd met her at the end of May, but it was only a few days until Midsummer, and he was ready to move on. He wanted to get up to the aquarium in Seattle by July, and there were a lot of seaside spots to visit along the way.

Besides, sooner or later she'd get too attached, and there was no way he could possibly tell her he was a selkie.

The old pine boards creaked as he walked across the attic. His flip-flops made soft smacking sounds on the wood floor, and dust rose up from his footsteps like little puffs of smoke. A seagull cawed outside, its cry muffled by the thick walls. The faint sound of the waves on the other side of the cliff was familiar and comforting.

He itched to spend a few days in his seal form. He hadn't worn it since the day he'd met Katy. And it had been far too long since he'd felt the sea's embrace.

It had all started in Newport at the Oregon Coast Aquarium. He had been in the pinniped enclosure discussing the usual topics with the seals, things like whether or not the water temperature was to their liking, what kinds of fish were they being fed, where they'd hid the toy a kid had dropped in their pen the other day. Mark hated that he couldn't free them, hated that his cousins had to stay penned up, but he knew if he did help them escape, other seals would only be captured in their stead. So he spent time every year visiting aquariums along the western coast to make sure the seals and sea lions were being treated well.

Then Katy had come up to him. She'd said she was a botanist doing research with the aquarium, and that she liked to look at the seals—but Mark knew women, and he knew why she had really stopped. She had the red curls of a temptress, wore a blue sweater that was tight in just the right places, and her smile promised fun. She'd been easy to charm—as they always were.

He'd spent that night at her house, and hid his sealskin in her attic the next day. He'd only planned to stay a few days, but had found Katy to be quite fun. If it hadn't been for the itch of the sea, he might have stayed even longer.

Mark reached the pile of blankets and coats and sweaters he'd hidden his skin in. It was about the size of a down comforter, and weighed quite a bit more than any blanket. He smiled as he knelt down and began to rummage through them, the musty scent of old fabric tickling his nose. It was going to feel so good to be back in the water. Swimming in his human form just wasn't the same.

He pulled the last blanket aside, the plaid wool rough against his skin.

The bare wooden floor stared back at him.

He must have missed it. He pressed his lips together. He went through the pile again, pulling every piece out one by one and placing it on the floor.

But his sealskin wasn't there.

Mark sat back on his heels, chills running down his back.

He took a deep breath, stood up, and looked around. There must be another stack of blankets. The attic was filled to the gills with crap. He must have put it somewhere else. He must have.

Except he knew he hadn't. It was part of him. He always knew exactly where he'd hidden it. He'd put it right here, in the northwest corner of the attic, in the pile with the green argyle sweater on top.

Mark stood as still as if he were frozen, all the old tales coming back to him about female selkies having their skins stolen, and then being forced to marry human men and never return to the sea.

That couldn't be him.

That wouldn't be him.

He must have moved it. Or perhaps he'd put it behind a box, or under the umbrellas, and had merely forgotten.

He searched the next pile, then the next, throwing winter coats, faded dresses made of taffeta and lace, and multi-colored afghans aside. Clouds of dust filled the air and tickled the back of his throat. He ripped open box after box, threw the umbrellas across the room, shook out every blanket. He tossed the contents of the old trunk onto the floor. He scoured the room, moving faster and faster, leaving a trail of clutter in his wake. He smacked his head on the low beams, but barely noticed. He pulled down the dried flowers and herbs that hung from the rafters, unrolled the old rugs, flung aside shirts, dresses, shoes, went through every bag and box and stack and pile.

Where was it? It was his!

And without it, he could never return to the sea.

Finally, he fell to his hands and knees on the pine floor, his face wet with tears. His breath came in huge gasps, and his T-shirt clung to his sweat-drenched body.

He knelt there, his head hanging down, until his breathing slowed. Empty cardboard boxes, rumpled newspapers, and old clothing littered the room. He pushed himself to his feet, wiped his face on his shirt, and walked back across the room to the attic hatch. Dried leaves crunched under his flip-flops. He climbed down the ladder, lifted the folding steps back up toward the ceiling, and pressed the door shut. A few stray pieces of paper had fallen through the hole, so he picked them up and put them in the recycling bin in the kitchen. He grabbed his packed duffle bag up from next to the front door, put his things back in the bedroom closet, and waited for Katy to come home.

That evening over dinner, he said, "I've lost something in the house. A kind of coat."