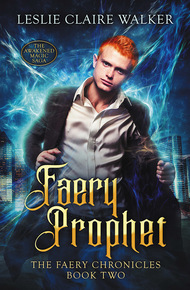 A class clown forced to lead the fight. A girl who will do anything to belong. To save his city—and the world—he must battle his greatest fear.

Rude is everyone's friend, the life of the party with uncanny luck. No one suspects his secret identity as a faery seer's apprentice, training to enforce magical law among faeries, angels, and demons. When a troubled girl asks him for help, he realizes too late that she—and her supernatural emergency—are way out of his league...

With the boss missing and allies abandoning the fight, it's on Rude to organize the resistance as Hell arrives on earth. Before time runs out, he must face his inner demons or become one himself…

Leslie Claire Walker's Faery Prophet is the second book in her Young Adult series Faery Chronicles. Will the blossoming powers of a faery seer's apprentice be strong enough to prevent a demon from rising? Or will he lose, and become a demon himself? – Jamie Ferguson

IT WAS A STICKY September Saturday night in Houston, Texas, on a sidewalk outside of the Rollins Pub, where Johnny Rocket played his thunder bass. People in various stages of inebriation mingled and the stink of stale beer lingered. Not the normal hangout spot for a sober dude without a fake ID. But, hey, I had responsibilities and a mostly secret identity.

My name? Rudolph Diamond Davies III. Rude, to my friends. Unofficially, the class clown. The party guy. The one with the uncanny luck. Always ready to be a friend or help out a dude in need. My official assignment: Save life. Prevent death. And other bad things.

I leaned against the brick wall outside the pub and stared at the old oak on the other side of the walk. Anyone else would see an ordinary tree whose ordinary roots buckled the sidewalk—if they noticed it at all. Me? I saw a portal to and from the Otherworld.

Otherworld, as in the place where faeries, demons, and angels lived. Sometimes they traveled through portals, aka gates, into the human realm. Sometimes they even came with good intentions.

I had it on good authority, however, that a visitor planned to bust through tonight, bleeding bad vibes and looking for trouble. As the youngest (and only) faery seer apprentice to the (only) full seer in town, I'd use my magic to turn them around. Send them back.

I kept my gaze on the tree. Didn't even blink. Until I spotted a girl I knew from senior English out of the corner of my eye.

Melody. Pretty name for a cheerleader-next-door kind of girl. Wavy blond hair brushed her shoulders. Her blue eyes sparkled when she saw me. I didn't know what to do except smile. And stare.

She wore red stilettos so tall and sharp, they practically sparked on the pavement. A short black skirt swung high on her thighs and a white tank hugged her every considerable curve. Definitely different clothes than she wore Monday through Friday.

Her cheekbones seemed a little high and sharp. Her mouth looked more severe. A worry line had erupted in the center of her forehead.

It wasn't just the clothes and the changes in her face that bothered me, though. She had a halo around her body the color of mud. What psychics would call a bad aura. A portent of violence—against herself or someone else? Either way, worry-making.

She pulled a pack of smokes from a tiny black purse and lit one as she sidled up to me. She elbowed me in the ribs, trying to be playful and failing—because that worry line? It didn't go away.

"Hey, Rude," she said in her husky voice.

"Hey, yourself. Didn't think I'd see you here."

"Holding up the wall," I said. Not exactly a lie. "Too bad I can't get in. Johnny Rocket's sounding real good. What I can hear of him, anyway."

She laughed. The line in her brow stayed through that, too. "How is it that a guy who throws the best keg parties in town—parties that practically the entire school comes to—doesn't have an ID for someplace like this?"

"Yeah, me. Really. You feeling okay?"

"Do I look like I have a fever or something?" She leaned in close, I guess so I could feel her forehead and give my best non-MD opinion. So close I could smell her subtle rose perfume. And underneath it, something stranger.

A sickly sweet scent, like cough syrup. And sulfur.

I took a deep breath to be sure and blew it out slow.

"You seem like you're in trouble." I thought twice about remarking on the smells, but the way she looked? I had to know, and the best way to do that was to use the element of vocal surprise. Best-case scenario, she'd just think I was weird. I was okay with that. Worst case? I hoped we didn't go there.

So I said, "And you smell like a demon."