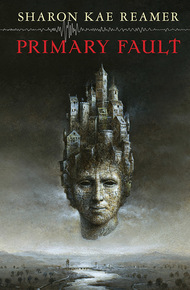 Now a full-time writer, Sharon Kae Reamer's speculative fiction is inspired by her participation in various archeoseismology projects during her twenty-something years as a senior scientist at the University of Cologne. Locations that include the Praetorium and medieval Jewish settlement in Cologne, ancient Tiryns in Greece, and Greek ruins in Selinunte, Sicily, provide perfect backdrops for creating fantasy stories rich with history and mythology, such as her Immortal Guardian and Schattenreich series.

Sharon still participates in archeoseismology projects. In her home on the outskirts of Cologne, she also cooks daily (German-English), gardens (chaotically, at best), knits (badly), does needlepoint (rather well) and reads (everything) all the damn time.

And, of course, she has cats.

Caitlin Schwarzbach fears Death. That's her name for the gaunt wraith who haunts her.

After leaving small-town Texas for Cologne, Germany, she faces an even bigger fear. Her seismologist brother Gus vanishes, wanted by the Cologne police. Caitlin's search for her brother – and his doppelgänger – earns her a bump on the head and a trip to the hospital.

She believes Gus's disappearance and ruined reputation form part of a larger conspiracy. The police do not agree. Gus remains their primary suspect.

With the help of the sexy aristocrat she's fallen for, Caitlin locates a vital witness: her brother's former lover. Can she prove Gus's innocence? When Caitlin arrives late to the rendezvous at Cologne's Gothic cathedral, an earthquake flings her into a bleak Otherworld. She finds the woman she arranged to meet – and a tall, gaunt wraith she has no desire to see.

Primary Fault, Book One of the Schattenreich, a tale of seismology, druids, and an evil blonde.

My mother would be all alone now. Red lobelia and rudbeckia fell from my hand in a crimson and yellow scatterplot over her grave. Tears escaped as I bent to gather the flowers into a bouquet.

The man standing next to me had an easy elegance about him most women liked. Most women also included my mother. I had understood her attraction to him but not the glue that kept them together.

I rose, fighting irritation that clogged my throat. "What are you doing here, Richey?"

Richey had loved my mother, had a right to visit her grave. But why now? He pretended to study the flowers as I wiped my face dry on my sleeve.

"She would have liked them better the other way, I'm sure," Richey said, a faint German lilt to his words. "Alison never did care much for convention."

"True." I drew in a breath of crisp October air and took a last look around.

Worn stones beneath willow and pine set this small section of cemetery apart from the grassy plots framed by hills undulating across the horizon. The sunken and crumbling markers could have been forsaken dispatches from the underworld.

"I came for a couple of reasons. First, your postcard said you were leaving Fredericksburg. It sounded rather final. Are you leaving Texas for good?" His blue eyes seemed troubled. "I wanted to wish you a good journey."

"Leaving, yes." I shrugged in answer to his question. "I didn't think it would matter to you. A phone call would have done the trick."

"Is there a particular reason you're going away just now?"

"Not that particular. Call it 'tired of going it alone'."

Richey and I had only one interest in common: my mother. Since her death, there seemed no reason for our paths to cross. I'd seen him just once since her funeral, when he visited me in the hospital. Richey had always maintained his reserve around me when she was alive, which made his sudden interest in me now confusing.

"Believe it or not, I understand perfectly. And you do matter to me, Caitlin. Sometime I hope I can explain it to you." He reached into his jacket and pulled out a sealed envelope. "This letter has some answers. Alison entrusted me with it. It's for you."

The letter, my mother's graceful script adorning the envelope, was addressed to me. I held out my hand, but he put the envelope back in his jacket.

"That's just a hair short of infuriating." I calmed myself and breathed out audibly. "I don't have time for this. I have to be on a plane to Amsterdam in a few hours."

"She instructed me to give you the letter only after you had moved back to Germany. She knew you would go to Augustus eventually."

"Semantics. I will be there tomorrow. Isn't that good enough?" I forced my mouth into a thin, compressed line, suppressing words that would terminate the polite tone that had already begun to leach from our exchange.

"There is one other reason I've come." He combed fingers through dark hair. The gray streaks nudged him even higher on the good looks scale. "She made a request of me. If it came to pass…she wanted her remains returned home."

"To Germany? When did she request that?"

"She doesn't belong here," he said with authority. He looked at the well-tended rectangle of earth again, his words almost a whisper. "We made a pact. A very long time ago." Richey glided his palm along the top of the small gravestone, good Texas granite shot through with rare blue quartz.

"Gus and I called in all our favors to get that piece of rock."

"I'll have it moved with her, of course."

He shrugged. "If it's important to you and Augustus, it would have been important to her. That makes it worth the expense."

Richey. Here he was, appearing unannounced at the last possible minute bearing mystery letters and secret pacts. But it didn't change anything. My mother was dead, despite my most desperate fantasies to the contrary.

"You know, it's not like she's just left us," I said. "It's been three years. Why in hell didn't you say anything to me before now? Or Gus? Neither one of us would have denied her last wishes."

"Because it was something she asked me to do." He let his hands drop to his sides. "And because I needed to come to terms with her being gone."

"That makes two of us. Besides Gus, she was all I really had." I crammed my fingers in my pockets at the thought of her grave being disturbed. But I still had one last place to visit and a plane to catch. If he wanted to play it that way, I'd just have to accept it. "I'll talk it over with Gus. When were you thinking about moving her?"

He nodded. "It will take me a while to organize everything. I'll be in touch." His eyes met mine, and the hint of worry in them puzzled me. "Caitlin—"

"It's okay. Just send the letter along. You have Gus's new address?"

He nodded again, swallowing. "It's just this. Remember the journeys you made with Alison in the garden?"

I closed my eyes briefly, remembering the mind game we played when I was little. Journeys to the Otherworld, she called it. Forbidden with a speck of dangerous, she had said, making me laugh. I had loved it.

I kept my voice tuned low to mask my apprehension. "She told you? Those games were our secret."

Richey took a deep breath and touched his fingers to my shoulders. "I don't mean to alarm you. But the truth is, it wasn't a game. The journeys were real. As real as you and I are."

"Oh, yeah? If you only knew how many times I've questioned the reality of my existence this past year. But, sure. I know what you mean. They were real. Like memories. As real as you want to make them."

My words brought a hint of trouble to his eyes. I'd seen that look before when he and my mother argued. "I also wanted to warn you."

"About what?" I took a step back to break the connection between us, a queasy feeling coming over me.

"You have a lot of catching up to do now. I suspect your life is about to become quite complicated."

This was the other side of Richey—cryptic and a little peculiar. I reckoned it was all a part of his tall, dark and handsome gig. I rubbed my palms on my jeans to curb the agitation twirling my stomach into a rope. Time to get a move on.

"Let's hope so. Leb wohl, Richey." I turned away from him.