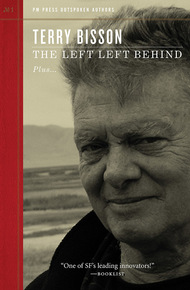 Terry Bisson, who was for many years a Kentuckian living in New York City, is now a New Yorker living in California. In addition to his Hugo and Nebula award winning science fiction, he has written biographies of Mumia Abu-Jamal and Nat Turner. He is also the host of a popular San Francisco reading series (SFinSF) and the Editor of PM's new Outspoken Authors pocketbook series. He lives in Oakland and rides a KLR650.

The Left Left Behind by Terry Bisson

Hugo and Nebula award-winner Terry Bisson is best known for his short stories, which range from the southern sweetness of "Bears Discover Fire" to the alienated aliens of "They're Made Out of Meat." He is also a 1960's New Left vet with a history of activism and an intact (if battered) radical ideology.

The Left Behind novels (about the so-called "Rapture" in which all the born-agains ascend straight to heaven) are among the bestselling Christian books in the United States, describing in lurid detail the adventures of those "left behind" to battle the Anti-Christ. Put Bisson and the born-agains together, and what do you get? The Left Left Behind—a sardonic, merciless, tasteless, take-no-prisoners satire of the entire apocalyptic enterprise that spares no one—predatory preachers, goth lingerie, Pacifica Radio, Indian casinos, gangsta rap, and even "art cars" at Burning Man.

Plus: "Special Relativity," a one-act drama that answers the question: When Albert Einstein, Paul Robeson, and J. Edgar Hoover are raised from the dead at an anti-Bush rally, which one wears the dress? As with all Outspoken Author books, there is a deep interview and autobiography: at length, in-depth, no-holds-barred and all-bets off: an extended tour through the mind and work, the history and politics of our Outspoken Author. Surprises are promised.

The Left Behind novels (some sixteen in all) by Tim LaHaye and Jerry Jenkins are among the best- selling fantasies in America today. Self-described as "apocalyptic fiction," they tell the story of the Rapture, in which the faithful are yanked straight up to Heaven without dying, and the following seven years of Tribula- tion, when those "left behind" are ruled by the Anti- Christ (a sleazy Romanian) until Christ's return. It all has to do with Armageddon and God's plan for Israel and the Christian Born-Agains.

Millions believe this nonsense, and the Left Be- hind novels are hugely popular. Patrice Duvic, a French SF writer and editor, alarmed that they were about to be published in France, suggested to me that we write a parody in which the world is better off with the Born- Agains gone. Patrice was ailing, and died before we got started, but the idea and the inspiration are all his—

The LefT LefT Behind "LeT Their PeoPLe go!"

"The Holy Land," said Vince. "This is where it all began." He felt a thrill as he looked around at the arid rocky hills that had given birth to so many

great religions. Although as a skeptical TV newsman he didn't believe in any of them, he respected them all.

"And where it's all still going on," said the Israeli general, Blitz Kreig, who was Vince's guide and host. "Don't forget we're in a security zone. This is not quite Israel—yet."

A stone bounced off his helmet.

"Understood," said Vince. While his worshipful (and cute) young camera-girl videotaped him, he be- gan the broadcast he had come ten thousand miles to make.

"This is Vince Kirkorian," he said, "reporting for IHS News, and I'm here near the Israeli settlement of Itz-Al-Aurz to interview Dr Kramer Kramer, the Nobel Prize winning biologist who—"

Annoyed, Vince signaled cut. "What's all the racket?" he asked the general.

"Land reform," General Kreig said proudly, point- ing behind him to an armored bulldozer, which was de- molishing a two-story house while wailing women in Arab headdresses looked on. "We're making the desert bloom."

Another rock bounced off his helmet.

"By bulldozing houses?" Like most TV newsmen, Vince had a highly developed appreciation of property values. "Where will these people live?"

"They're Palestinians," explained General Kreig, firing a short burst from his Uzi into a crowd of unruly kids. "They can hop on their camels and find another place to pitch their tents. This is the land God prom- ised us. It's in the Bible."

Another rock bounced off his helmet. It didn't seem to bother him.

"Oh, yes, the Promised Land," said Vince, re- membering. It didn't seem quite fair, but he knew better than to question other people's sincerely-held religious beliefs. "Can you ask them to hold off on the land re- form till my interview with Dr. Kramer is over?"

"Done," said the general, signaling the dozer driv- er, who shut down the huge machine. "And here comes the good doctor now!"

Vince couldn't hide his smile as the old man approached, walking down the path from the attractive concrete battlements of the settlement perched on top of a nearby hill.

In his ragged cardigan and baggy pants, he looked exactly like Einstein, even to the kindly twinkle in his eye.