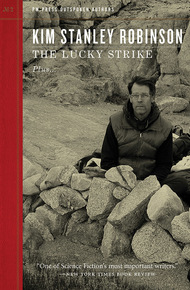 Born in 1952, a Californian through and through, Kim Stanley Robinson grew up in Orange County, surfed his way through UC San Diego (writing his doctoral thesis on Philip K. Dick), and now lives in Davis with two kids and a beautiful scientist wife. He spends several weeks a year above 11,500 feet in the high Sierras. Not surprisingly, he's a good friend of Gary Snyder.

Combining dazzling speculation with a profoundly humanist vision, Kim Stanley Robinson is known as not only the most literary but also the most progressive (read "radical") of today's top rank SF authors. His bestselling Mars Trilogy tells the epic story of the future colonization of the red planet, and the revolution that inevitably follows. The Years of Rice and Salt is based on a devastatingly simple idea: If the medieval plague had wiped out all of Europe, what would our world look like today? His novel Galileo's Dream is a stunning combination of historical drama and far-flung space opera, in which the ten dimensions of the universe itself are rewoven to ensnare history's most notorious torturers.

"The Lucky Strike," the classic and controversial story Robinson has chosen for PM's Outspoken Authors series, begins on a lonely Pacific island, where a crew of untested men are about to take off in an untried aircraft with a deadly payload that will change our world forever. Until something goes wonderfully wrong …

Plus: "A Sensitive Dependence on Initial Conditions," in which Robinson dramatically deconstructs "alternate history" to explore what might have been if things had gone differently over Hiroshima that day. As with all Outspoken Author books, there is a deep interview and autobiography: at length, in-depth, no-holds-barred, and all-bets-off: an extended tour though the mind and work, the history and politics of our Outspoken Author. Surprises are promised.

War breeds strange pastimes. In July of 1945 on Tinian island in the North Pacific, Captain Frank January had taken to piling pebble cairns on the crown of Mount Lasso—one pebble for each B-29 take- off, one cairn for each mission. The largest cairn had four hundred stones in it. It was a mindless pastime, but so was poker. The men of the 509th had played a million hands of poker, sitting in the shade of a palm around an upturned crate sweating in their skivvies, swearing and betting all their pay and cigarettes, playing hand after hand after hand, until the cards got so soft and dog-eared you could have used them for toilet pa- per. Captain January had gotten sick of it, and after he lit out for the hilltop a few times some of his crewmates started trailing him. When their pilot Jim Fitch joined them it became an official pastime, like throwing flares into the compound or going hunting for stray Japs. What Captain January thought of the development he didn't say. The others grouped near Captain Fitch, who passed around his battered flask. "Hey, January," Fitch called. "Come on, have a shot."

January wandered over and took the flask. Fitch laughed at his pebble. "Practicing your bombing up here, eh, Professor?''

"Yah," January said sullenly. Anyone who read more than the funnies was Professor to Fitch. Thirstily January knocked back some rum. He could drink it any way he pleased up here, out from under the eye of the group psychiatrist. He passed the flask on to Lieutenant Matthews, their navigator.

Fitch laughed. "He's best because I make him be best, right, Professor?"

January frowned. Fitch was a bulky youth, thick- featured, pig-eyed—a thug, in January's opinion. The rest of the crew were all in their mid-twenties like Fitch, and they liked the captain's bossy roughhouse style. January, who was thirty-seven, didn't go for it. He wan- dered away, back to the cairn he had been building. From Mount Lasso they had an overview of the whole island, from the harbor at Wall Street to the north field in Harlem. January had observed hundreds of B-29s roar off the four parallel runways of the north field and head for Japan. The last quartet of this particular mis- sion buzzed across the width of the island, and January dropped four more pebbles, aiming for crevices in the pile. One of them stuck nicely.

"There they are!" said Matthews. "They're on the taxiing strip."

January located the 509th's first plane. Today, the first of August, there was something more interesting to watch than the usual Superfortress parade. Word was out that General Le May wanted to take the 509th's mission away from it. Their commander Colonel Tib- bets had gone and bitched to La May in person, and the general had agreed the mission was theirs, but on one condition: one of the general's men was to make a test flight with the 509th, to make sure they were fit for combat over Japan. The general's man had arrived, and now he was down there in the strike plane, with Tib- bets and the whole first team. January sidled back to his mates to view the takeoff with them.

"Why don't the strike plane have a name, though?" Haddock was saying.

Fitch said, "Lewis won't give it a name because it's not his plane, and he knows it." The others laughed. Lewis and his crew were naturally unpopular, being Tibbets' favorites.

"What do you think he'll do to the general's man?" Matthews asked.

The others laughed at the very idea. "He'll kill an engine at takeoff, I bet you anything," Fitch said. He pointed at the wrecked B-29s that marked the end of every runway, planes whose engines had given out on takeoff. "He'll want to show that he wouldn't go down if it happened to him."

"'Course he wouldn't!" Matthews said. "You hope," January said under his breath. "They let those Wright engines out too soon,"

Haddock said seriously. "They keep busting under the takeoff load."

"Won't matter to the old bull," Matthews said. Then they all started in about Tibbets' flying ability, even Fitch. They all thought Tibbets was the greatest. Janu- ary, on the other hand, liked Tibbets even less than he liked Fitch. That had started right after he was assigned to the 509th. He had been told he was part of the most important group in the war, and then given a leave.