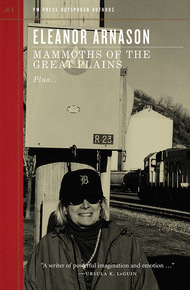 Eleanor Arnason was born in New York City in 1942. Her mother, Elizabeth Hickcox Yard, was a social worker who grew up in a missionary community in western China. Her father, Hjorvardur Harvard Arnason, was the son of Icelandic immigrants and an art historian. She grew up in New York, Chicago, London, Paris, Washington DC, Honolulu, St. Paul, and Minneapolis. She received a BA in art history from Swarthmore College and did graduate work at the University of Minnesota, before quitting to learn about life outside art museums and institutions of higher learning. She made her first professional sale in 1972 while living in the Detroit inner city. Since then she has published six novels and over fifty works of short fiction. Since 1994 she has devoted herself to short fiction.

Mammoths of the Great Plains by Eleanor Arnason

When President Thomas Jefferson sent Lewis and Clark to explore the West, he told them to look especially for mammoths. Jefferson had seen bones and tusks of the great beasts in Virginia, and he suspected—he hoped!—that they might still roam the Great Plains. In Eleanor Arnason's imaginative alternate history, they do: shaggy herds thunder over the grasslands, living symbols of the oncoming struggle between the Native peoples and the European invaders. And in an unforgettable saga that soars from the badlands of the Dakotas to the icy wastes of Siberia, from the Russian Revolution to the AIM protests of the 1960s, Arnason tells of a modern woman's struggle to use the weapons of DNA science to fulfill the ancient promises of her Lakota heritage.

PLUS: "Writing SF During World War III," and an Outspoken Interview that takes you straight into the heart and mind of one of today's edgiest and most uncompromising speculative authors.

Mammoths of the Great Plains

Every summer my parents sent me to stay with my grandmother in Fort Yates, North Dakota. I took the rocket train from Minneapolis, waving at Mom and Dad on the platform as the train pulled out, then settling comfortably into my coach seat. I loved my par- ents, but I also loved to travel, and I was especially fond of the trip to Fort Yates.

We glided north along the Mississippi, gaining speed as we left the city and entered the wide ring of suburbs around Minneapolis and St. Paul. Looking out, I saw scrub woods and weedy meadows, dotted with the ruins of McMansions and shopping malls.

The suburbs had been built on good land, my dad told me, replacing farms, wood lots, lakes and marshes. "A terrible waste of good soil, which could have fed thousands of people; and the land is not easy to re- claim, given all the asphalt and concrete which has been poured over it. That's why we've left it alone. Let time and nature work on it and soften it up!"

Dad's employer, the Agricultural Recovery Administration, might be ignoring the suburbs. But

there were people in them. Looking out my window, I saw gardens and tents among the weeds and ruined houses; and there were platforms made of scrap wood along the tracks. The rocket trains didn't stop at the platforms; but local trains did, picking up produce for markets in the city. Now and then I saw an actual per- son, hanging clothes on a line or riding a bicycle bump- ily along a trail.

"Fools," Dad called them and refused to buy their food in the market, though it had passed inspection. I thought the people were romantic: modern pioneers. My grandmother had things to say about pioneers, of course.

North of St. Cloud, the forest began, and I went to the bubble car, riding its lift to the second floor and a new seat with a better view. The forest was second or third growth, a mixture of conifers and hardwoods; and there was a terrible problem with deer. They were a problem on farms as well, though not as much as gen-mod weeds and bugs. Market hunters controlled the deer, in so far as they were controlled. Wolves and panthers would do a better job, my father said; but the farmers didn't like them.

Trees flashed by, light green and dark green, brown if they were dying. The conifers were heat-stressed and vulnerable to parasites and disease. In time the for- est would be entirely hardwood. Now and then I saw a gleam of blue: a pond or lake surrounded by forest. Sometimes the train crossed a river.

Around noon we reached the bed of fossil Lake Agassiz, also known as the Red River Valley. The forest ended, and we traveled through farm land, amazingly flat. Trees grew in lines between the fields: windbreaks. They were necessary, given the wind that came off the western plains. The main crops were potatoes and sugar beets. The farmers had to keep changing the varieties they grew as the climate changed, getting hotter. "We're like the Red Queen in Alice," Dad said. "Running and running in order to remain in one place."

The train stopped at Fargo-Moorhead, then turned due north, going along the Red River to Grand Forks. Then it turned again. I went to the dining car and ate lunch while we raced west across the North Dakota plain. This was wind farm country. Rows of giant wind- mills extended as far as I could see. Between them were fields of sunflowers. In the old days, my dad said, the fields had been dotted with pothole lakes and marshes full of wild birds. Most were gone now, the water dried up and the birds flown. In any case, the train moved so rapidly that I couldn't bird watch, except to look at hawks soaring in the dusty blue sky, too far up to identify.

I got off at Minot and stayed the night with my mother's second cousin Thelma Horn. In the morning Thelma put me on a local train that ran south along the Missouri River. There was only one passenger car, hitched to an engine that hauled boxcars and tankers. The track was not nearly as well maintained as the rock- et train's line. The local rocked slowly along, stopping often. By late morning we were on the Standing Rock Reservation. There were bison on the hillsides, the only livestock that made sense in short grass prairie, my dad said, and hawks in the sky. If I was lucky, I might see pronghorns or a flock of wild turkeys.

By noon I was at the Fort Yates station. My grandmother waited there, tall and thin and upright, her hair pulled back in a bun and her nose jutting like the nose on the Crazy Horse monument. At home in Minneapolis, I forgot I was part Lakota. Here, looking at my grandmother, I remembered.