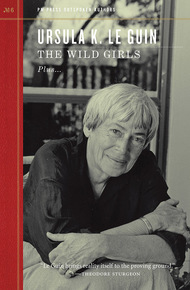 Ursula K. Le Guin's novels and stories have won every major SF and fantasy award as well as the Pen/Malamud and the National Book Award. A mentor to two generations of radical feminist and progressive writers, she lives in Portland, Oregon

Ursula K. Le Guin is the one modern science fiction author who truly needs no introduction. In the half century since The Left Hand of Darkness, her works have changed not only the face but the tone and the agenda of SF, introducing themes of gender, race, socialism, and anarchism, all the while thrilling readers with trips to strange (and strangely familiar) new worlds. She is our exemplar of what fantastic literature can and should be about.

Her Nebula winner The Wild Girls, newly revised and presented here in book form for the first time, tells of two captive "dirt children" in a society of sword and silk, whose determination to enter "that possible even when unattainable space in which there is room for justice" leads to a violent and loving end.

Plus: Le Guin's scandalous and scorching Harper's essay, "Staying Awake While We Read," (also collected here for the first time) which demolishes the pretensions of corporate publishing and the basic assumptions of capitalism as well. And of course our Outspoken Interview, which promises to reveal the hidden dimensions of America's best-known SF author. And delivers.

BELA TEN BELEN WENT ON A FORAY with five companions. There had been no nomad camps near the City for several years, but harvesters in the Eastern Fields reported seeing smoke of fires beyond the Dayward Hills, and the six young men announced that they'd go see how many camps there were. They took with them as guide Bidh Handa, who had guided forays against the nomad tribes before. Bidh and his sister had been captured from a nomad village as children and grew up in the City as slaves. Bidh's sister Nata was famous for her beauty, and Bela's brother Alo had given her owner a good deal of the Belen family wealth to get her for his wife.

Bela and his companions walked and ran all day following the course of the East River up into the hills. In the evening they came to the crest of the hills and saw on the plains below them, among watermeadows and winding streams, three circles of the nomads' skin huts, strung out quite far apart."

"They came to the marshes to gather mudroots," the guide said. "They're not planning a raid on the Fields of the City. If they were, the three camps would be close together."

"Men and women. Old people and children stay in the camps."

"When do the people go to the marshes?"

"Early in the morning."

"We'll go down to that nearest camp tomorrow after the gatherers are gone."

"It would be better to go to the second village, the one on the river," Bidh said.

Bela ten Belen turned to his soldiers and said, "Those are this man's people. We should shackle him."

They agreed, but none of them had brought shackles. Bela began to tear his cape into strips.

"Why do you want to tie me up, lord?" the Dirt man asked with his fist to his forehead to show respect. "Have I not guided you, and others before you, to the nomads? Am I not a man of the City? Is not my sister your brother's wife? Is not my nephew your nephew, and a god? Why would I run away from our City to ""those ignorant people who starve in the wilderness, eating mudroots and crawling things?" The Crown men did not answer the Dirt man. They tied his legs with the lengths of twisted cloth, pulling the knots in the silk so tight they could not be untied but only cut open. Bela appointed three men to keep watch in turn that night.

Tired from walking and running all day, the young man on watch before dawn fell asleep. Bidh put his legs into the coals of their fire and burned through the silken ropes and stole away.

When he woke in the morning and found the slave gone, Bela ten Belen's face grew heavy with anger, but he said only, "He'll have warned that nearest camp. We'll go to the farthest one, off there on the high ground."

"Not if we walk in the rivers," Bela ten Belen said.

And once they were out of the hills on the flat lands they walked along streambeds, hidden by the high reeds and willows that grew on the banks. It was autumn, before the rains, so the water was shallow enough that they[…]"