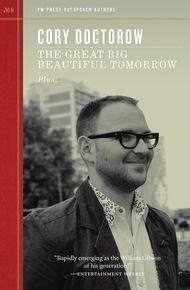 Cory Doctorow is a science fiction author, activist, journalist and blogger—the co-editor of Boing Boing and the author of novels For the Win and the bestselling Little Brother among many others. He is the former European director of the Electronic Frontier Foundation and co-founded the UK Open Rights Group. Born in Toronto, Canada, he now lives in London.

Cory Doctorow burst on the SF scene in 2000 like a rocket, inspiring awe in readers (and envy in other writers) with his bestselling novels and stories, which he insisted on giving away via Creative Commons. Meanwhile, as coeditor of the wildly popular blog Boing Boing, he became the radical new voice of the Web, boldly arguing for internet freedom from corporate control.

Doctorow's activism and artistry are both on display in this Outspoken Author edition. The crown jewel is his novella The Great Big Beautiful Tomorrow, the high-velocity adventures of a transhuman teenager in a toxic post-Disney dystopia, battling wireheads and wumpuses (and having fun doing it!) until he meets the "meat girl" of his dreams, and is forced to choose between immortality and sex.

Plus a live transcription of Cory's historic address to the 2010 World SF Convention, "Creativity vs. Copyright," dramatically presenting his controversial case for open-source in both information and art.

Also included is an international Outspoken Interview (Skyped from England, Canada, and the U.S.) in which Doctorow reveals the surprising sources of his genius.

I piloted the mecha through the streets of Detroit, hunt- ing wumpuses. The mecha was a relic of the Mecha Wars, when the nation tore itself to shreds with lethal robots, and it had the weird, swirling lines of all evolutionary tech, chan- neled and chopped and counterweighted like some freak di- nosaur or a racecar.

I loved the mecha. It wasn't fast, but it had a fantastic ride, a kind of wobbly strut that was surprisingly comfort- able and let me keep the big fore and aft guns on any target I chose, the sights gliding along on a perfect level even as the neck rocked from side to side.

The pack loved the mecha too. All six of them, three aerial bots shaped like bats, two ground-cover streaks that nipped around my heels, and a flea that bounded over build- ings, bouncing off the walls and leaping from monorail track to rusting hover-bus to balcony and back. The pack's brains were back in Dad's house, in the old Comerica Park site. When I found them, they'd been a pack of sick dogs, drag- ging themselves through the ruined city, poisoned by some old materiel. I had done them the mercy of extracting their brains and connecting them up to the house network. Now they were immortal, just like me, and they knew that I was their alpha dog. They loved to go for walks with me.

I spotted the wumpus by the plume of dust it kicked up. It was well inside the perimeter, gnawing at the corner of an old satellite Ford factory, a building gone to magnificent ruin, all crumbled walls and crazy, unsprung machines. The structural pillars stuck up all around it, like columns around a Greek temple.

The wumpus had the classic look. It stood about eight feet tall, with a hundred mouths on the ends of whip- ping tentacles. Its metallic finish was smeared with oily rainbows that wobbled as the dust swirled around it. The mouths whipped back and forth against the corner of the factory, taking chunks out of it. The chunks went into the hopper on its back and were broken up into their constitu- ent atoms, reassembled into handy, safe, rich soil, and then ejected in a vertical plume that was visible even from several blocks away.

Wumpuses don't put up much fight. They're reclama- tion drones, not hunter-killer bots, and their main mode of attack was to assemble copies of themselves out of dead buildings faster than I could squash them. They weren't much sport, but that was OK: there's no way Dad would let me put his precious mecha at risk against any kind of big game. The pack loved hunting wumpus, anyway.

The air-drones swooped around it in tight arcs. They were usually piloted by Pepe, the hysterical chihuahua, who loved to have three points-of-view, it fit right in with his distracted, hyperactive approach to life. The wumpus didn't even notice the drones until one of them came in so low that it tore through the tentacles, taking three clean off and disor- dering the remainder. The other air-drones did victory loops in the sky overhead, and the flea bounded so high that it practically disappeared from sight, then touched down right next to the wumpus.

This attack was characteristic of Gretl, the Irish Setter mix who thought she was a kangaroo. The whole pack liked the flea, but Gretl was born to it. She bounced the wumpus six times, knocking it back and forth like an air-hockey puck, leaping free before it could bring its tentacles to bear on her.

The ground-effect bots reached the wumpus at the same time as I did. Technically, I was supposed to hang back out of range and get it with the mecha's big guns, to make sure that it didn't get a bite or two in on the mecha's skin, scratching the finish. But that was no fun at all. I liked to dance with the wumpus, especially when the pack was in on it, all of us dodging in and out, snatching the wumpus's tentacles, kicking it back and forth. The ground-effect bots were clearly piloted by Ike and Mike, two dogs that had been so badly mutilated when I found them that I couldn't even guess at their breed. They must have been big beasts at one point. They were born to ground-effect bots, anyway, bulling the wumpus around.

The wumpus was down to just a few tentacles now, and I could see into its hopper, normally obscured by the forest of waving arms and mouths. The hopper itself was lined with tentacles, but thin ones, whiplike, each one fringed with hairy cilia. The cilia branched and branched again, down to single- molecule pincers, each one optimized to break apart a differ- ent kind of material. I knew better than to reach inside that hopper with the mecha's fists—even after I'd killed the wum- pus, the hopper would digest anything I fed it, including me.

Its foot-spoked wheels spun madly as we batted it around like a cat playing with a mouse. They could get trac- tion on anything, given enough time to get their balance, but we weren't going to give it the chance. The air-drones snipped the last of the tentacles, and I touched the control that whistled the pack back. They obediently came to my heels, and I put the wumpus in my sights. The wumpus seemed to sense what was coming. It stopped struggling and settled down on the feet of its wheels. I methodically blew apart its hopper with my depleted uranium guns, chipping away at it, blowing it open, cilia waving and spasming. Now the wumpus was just a coil of metallic skin and logic with a hundred wheels, naked and stripped. I used the rocket- launcher on it and savored the debris-fountain that rose from it. Sweet!

"Jimmy Yensid, you are cruel and vile!" The voice bounced off the walls of the ruined buildings around me, strident and shrill. I rotated the mecha's cowl and scanned the ground. There she was, standing on top of a dead hover- bus, a spidergoat behind her on a tether. I popped the cowl and shinned down the mecha, using the grippy hand- and toe-holds that tried to conform to my grasp.

"Hello, Lacey!" I called. "You're looking very pretty today." Dad had always taught me to talk to girls this way, though there weren't many meat girls in my world, just the ones I saw online and, of course, the intriguing women of the Carousel of Progress, back in the center of Comerica Park. And it was true. Lacey Treehugger was ever so pretty—with a face as round as a pie-plate and lips like a drawn-up bow. Talking to Lacey was as forbidden as destroying the mecha, maybe more, but Dad could tell if the mecha got scratched and he had no way of finding out if I had been passing the time of day with pretty Lacey.

She was taller than me now, which was only to be ex- pected, because she was not immortal and so she was grow- ing at regular speed while I was going to stick to my present, neat little size for a good while yet. I didn't mind that she was taller, either—I liked the view.

"Hello, hello," I said as I scaled the hover, coming up to stand next to her. "Hello!" I said to the spider-goat, hold- ing out the flat of my hand for it to sniff. It brayed at me and menaced me with its horns. "Come on, Louisa, play nice."

She tugged on the goat's lead, a zizzing spool of some- thing that felt as soft as felt but could selectively tighten at the loop-end when the goat got a little too edgy.