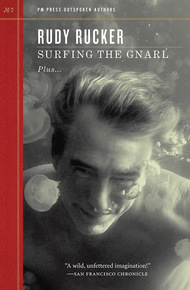 Rudy Rucker has written forty books, both pop science and SF novels in the cyberpunk and transreal styles. He received Philip K. Dick awards for his Software and Wetware. He worked as a professor of computer science in Silicon Valley. He paints works relating to his tales. His stories can be read online his Complete Stories webpage. His for coming novel Juicy Ghosts is about telepathy, immortality, and assassinating an evil, insane President who has stolen an election. Rudy blogs at www.rudyrucker.com/blog

Surfing the Gnarl by Rudy Rucker

The original "Mad Professor" of cyberpunk, Rudy Rucker (along with fellow outlaws William Gibson and Bruce Sterling) transformed modern science fiction, tethering the "gnarly" speculations of quantum physics to the noir sensibilities of a skeptical and disenchanted generation. In acclaimed novels like Wetware and The Hacker and the Ant he mapped a neotopian future that belongs not to sober scientists but to drug-addled, sex-crazed youth. And won legions of fans doing it.

In his outrageous new story "The Men in the Back Room at the Country Club," Dr. Rucker infiltrates fundamentalist Virginia to witness the apocalyptic clash between Bible-thumpers and Saucer Demons at a country club barbecue. He shoots erotica into orbit with "Rapture in Space" to explore the future of foreplay in freefall. In his gonzo nonfiction masterpiece "Surfing the Gnarl," he documents the role of the Transreal in transforming both the personal and the political, distinguishes with mathematical precision between "high gnarl" and "low gnarl" in literature and life, and argues for remaking popular culture as a revolutionary project.

And Featuring: PM's exclusive Outspoken Interview, in which the author explains Infinity, deconstructs his own outrageous film career, answers one Jeopardy question, and (finally!) reveals the truth about Time. All under oath.

You'll never be the same. Is that good or bad? Your call.

THE MEN IN THE BACK ROOM AT THE COUNTRY CLUB

"Yo, Jack," said Tonel as they lugged two golf bags apiece toward the men's locker room. It was sunset, the end of a long Saturday's caddying, Jack's last day of work this summer.

"I didn't get a chance to tell you," continued Tonel, shouldering open the door. "About who I saw sweatin' in Ragland's backyard this morning." It was fresh and cool in the locker room. A nice break from the heavy, thick August air.

"In Ragland's yard?" said Jack Vaughan, setting down the bags and wiping his brow. "I don't know. His ninety-year-old mother?" Jack suspected a joke. Ragland was the master of the locker room, ensconced behind his counter. Tidily cleaned shoes and piles of fresh white tow- els sat on the white-painted shelves around him. Although the bare-skulled Ragland's eyes were half-closed, it was likely that he was listening.

"It was the five mibracc," said Tonel. "Doin' Ragland's yard work. Isn't that right, Ragland? What's the dealio? How you get to slave-driving them Republicans?

I need to know." Tonel lived right next door to Ragland. The two weren't particularly fond of each other.

"Don't be mouthin' on my business, yellow dog," said Ragland. Though he cleaned the shoes of popinjays, he insisted on his dignity.

A burst of talk echoed from the little back room beyond Ragland's station. Just like every other morning or afternoon, the mibracc—the caddies' nickname for "men in the back room at the country club"—were in there, safe from women, out of the daylight, playing cards and drink- ing the bourbon they stored in their lockers.

"Those bagworts do chores?" said Jack. "No way, Tonel."

"I seen it," insisted Tonel. "Mr. Atlee was draggin' a plow with Mr. Early steerin' it. Mr. Gupta was down on his knees pullin' up weeds, and Mr. Inkle and Mr. Cuthbert was carryin' trash out to the alley. Ole Ragland sittin' on the back porch with his shotgun across his knees. Did your Meemaw put conjure on them, Ragland?"

"You want me to snapify your ass?" said Ragland. Though gray and worn, Ragland was, in his own way, an imposing man.

Tonel made a series of mystic passes, hoodoo signs, and rap gestures in Ragland's direction.

"I'll ask the men myself," said Jack, caught up by Tonel's rebellious spirit.

The two boys stepped into the back room, a plain space with a tile floor and shiny green paint on the win- dowless concrete walls. The five old men sat in battered wooden captain's chairs around a table from the club's lounge. Oily Mr. Atlee was dealing out cards to spindly, white-haired Mr. Early, to bald-as-a-doorknob Mr. Inkle,

to Mr. Cuthbert with his alarming false teeth, and to Mr. Gupta, the only nonwhite member of the Killeville Country Club.

There was no response. The mibracc studied their cards, sipping at their glasses of bourbon and water, their every little gesture saying, "Leave us alone." Mr. Inkle stubbed out a cigarette and lit a fresh one.

"Listen up," said Tonel in a louder tone. "I gotta axe you gentlemen somethin'. Was you bustin' sod for Ragland today? My friend here don't believe me."

Still no answer. The mibracc were so fully with- drawn into their clubby little thing that you could just as well try talking to your TV. Or to five spiteful children.

"Scoop," grunted Mr. Cuthbert, standing up with his glass in hand. Mr. Gupta handed him his empty glass as well. With the slightest grunt of nonrecognition, Mr. Cuthbert sidled past Tonel and Jack, moving a little oddly, as if his knees were double-jointed. His oversized plastic teeth glinted in the fluorescent light. Mr. Cuthbert pressed his thumb to his locker's pad, opened the door, and dipped the two glasses down into his golf bag. Jack could smell the bourbon, a holiday smell.

The mibracc's golf bags held no clubs. They were lined with glass, with tall golf bag–sized glass beakers, or carboys. Big glass jars holding gallons of premium bour- bon. It was a new gimmick, strictly hush-hush; nobody but Ragland and the caddies knew. Mr. Atlee, a former druggist, had obtained the carboys, and Mr. Early, a for- mer distiller's rep, had arranged for a man to come one night with an oak cask on a dolly to fill the bags. The mi- bracc were loving it.