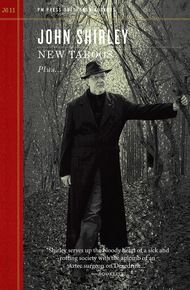 John Shirley is one of the original "Dread Lords" of Cyberpunk who brought a new noir sensibility to SF and Fantasy in the nineties. Still associated with his literary compatriots Gibson, Rucker, and Sterling, Shirley has expanded his work into comics, film, TV, and music, bringing his legions of fans along with him.

John Shirley is the author of numerous books and many, many short stories. His novels include Bleak History, Crawlers, Demons, In Darkness Waiting, and seminal cyberpunk works City Come A-Walkin' as well as the A Song Called Youth trilogy of Eclipse, Eclipse Penumbra, and Eclipse Corona. His collections include the Bram Stoker and International Horror Guild award-winning Black Butterflies, Living Shadows: Stories New & Pre-owned, and In Extremis: The Most Extreme Short Stories of John Shirley. He also writes for screen (The Crow) and television. As a musician Shirley has fronted his own bands and written lyrics for Blue Öyster Cult and others.

Mixing outlaw humor, SF adventure, and cutting social criticism, Shirley draws upon his entire arsenal of narrative and commentary. The title essay, "New Taboos" is his prescription for a radical revisioning of America. A new novella, A State of Imprisonment, is a horrifying and grimly hilarious look at the privatization of the prison industry. "Why We Need Forty Years of Hell," Shirley's 2011 TEDx address, presents his proudly contrarian view of the near future.

A STATE OF IMPRISONMENT

"Minor offenders who cannot pay a fine or fee often find themselves in jail cells. And felony offenders who have completed their prison sentences are often sent back to jail when they cannot pay fees and fines they owe because they could not earn money while locked up. . . . The right to counsel is rarely brought up."

"I just remember how much it hurt when they put the tracker in there. 'This isn't going to hurt,' he says. Fuck that! It hurt! But at least they used a local . . ."

"You don't need a local, you're numb all over now," Whore Tense said, poising the homemade scalpel over Rudy's ass.

"The fuck I am! A little drunk and slightly opiated— ow! Motherfucker, Whore, that hurts!"

Rudy was lying naked face down on the bunk; Whore Tense had just started cutting into the fat of Rudy's ass-cheek. "Stop being a baby," she said. "Actually I'm al- most there already . . . won't have to cut into muscle . . . sometimes they put it too deep . . . used to be easy to get 'em out when they put 'em right under the skin . . . my first one was in my forearm here, what an ugly bump they made on your skin . . . I still have a scar . . ."

Rudy figured Whore Tense was talking just to keep his mind off the pain. She was a kindly sort.

They were in Rudy's cell, with one of the red imita- tion-wool blankets hanging over the window in the door to block the cameras and the guard patrol's view, and that was good for a while, anybody checking the monitors would assume they were having sex—which was usually tolerated during certain hours.

Rudy could hear blood tip-tapping onto the floor as she dug the prisoner tracing device out of him. "Don't sound like you're catching that blood," he muttered into the pillow.

"Always miss some. You paid for the clean up, I said I'd clean it up, don't worry about it—"

ments—the stolen tweezers probably. Then another jolt of agony . . . and it receded, became a mere throb.

"I got it!" Whore Tense announced breathily, turn- ing it into a squeal.

"Now comes the big fun. Sewing me up . . ." "No, I got sealant spray and a skin clamp . . ." She pilfered the wound-closing materials from infir-

mary storage. Whore Tense's prison job was assistant to the clinician in the pod's infirmary; she was a former RN. She had been Jose Mendoza when she was an RN—when she'd gone about as a he. Transgender, she'd gone by Hortense on the outside; in Statewide she got dubbed Whore Tense— with a slight pause between the words—and she went along with the joke.

As Hortense, she'd gotten into debt behind hormone treatments, breast implants, loans to pay for the sex re- assignment—for the operation she never got. She didn't get the hormones here; there were no transgender rights in Statewide. This was Arizona, not California. So Whore Tense had to shave, and lost some body softness. But she got hold of some makeup—made some herself when she had to—and managed her look.

Rudy felt the clamp's pinch and the sealant spray, and hoped it would stay in place. He doubted it.

She cleaned the blood off his ass with Purell wipes, talking to him the while. "Steve'll be here in an hour, what he told me. I got to go to Spanish . . . That boy Doggy going to be there, he sits right in front of me on purpose, I know he likes me . . ."