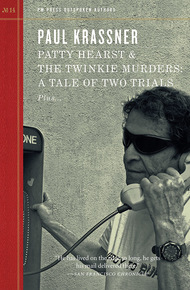 Creator of the Realist, the legendary underground magazine that many credit as the beginning of the radical "new journalism" of the 1960s, Paul Krassner is an immortal, immoral, revered, and reviled icon of American humor. Wielding satire as a weapon, he began the assault on middle America known today as the "counterculture" and is still a hero to radicals and a menace to the establishment. He now lives near Palm Springs disguised as an old man.

Patty Hearst & The Twinkie Murders is a darkly satiric take on two of the most famous cases of our era: the kidnapping of heiress Patty Hearst, and the shocking assassination of San Francisco Mayor George Moscone and gay leader Harvey Milk. As a reporter for the Berkeley Barb, Paul Krassner was ringside at the spectacular California trials. Krassner's deadpan, hilarious style captures the nightmare reality behind the absurdities of the courtroom circus.

Using his infamous satiric pen and investigative chops, Krassner gets to the truth behind the events: the role of the police and FBI, the real deal with Patty and the SLA, and what really happened in Patty's infamous closet.

Plus: A merciless exposé of the "Taliban" wing of the gay movement and their scandalous attacks on alt-rock star Michelle Shocked.

Also featured is our Outspoken Interview, an irreverent and fascinating romp through the secret history of America's radical underground. Names will be named.

Groucho Marx said during an interview with Flash magazine in 1971, "I think the only hope this country has is Nixon's assassination." Yet he was not subsequently arrested for threatening the life of a president. In view of the indictment against Black Panther David Hilliard for using similar rhetoric, I wrote to the San Francisco office of the Justice Department to find out the status of their case against Groucho.

This was the response:

Responding to your inquiry of July 7th, the United States Supreme Court has held that Title 18 U.S.C., section 871, prohibits only "true" threats. It is one thing to say that "I (or we) will kill Richard Nixon" when you are the leader of an organization which ad- vocates killing people and overthrowing the

Government; it is quite another to utter the words which are attributed to Mr. Marx, an alleged comedian. It was the opinion of both myself and the United States Attorney in Los Angeles (where Marx's words were alleged to have been uttered) that the latter utterance did not constitute a "true" threat.

Browning was so anxious in his pursuit of justice that he successfully fought for the dismissal of charges against federal narcotics officers who had shot an innocent hippie in the back from their helicopter in Humboldt County. In 1976, I found myself sitting in a courtroom every day, ob- serving Browning as he prosecuted a bank robbery case that seemed like a perverted version of a Marx Brothers movie.

Patricia Hearst had been kidnapped by the Symbionese Liberation Army—a group of white men and women led by an African-American, Donald "Cinque" DeFreeze. Patty was kept in a closet, then she joined them, changed her name to Tania, adopted radical rhetoric and robbed a bank with them. Now the philosophical paradox which has plagued the history of human consciousness—Is there is or is there ain't Free Will?—was finally going to be de- cided by a jury.

The abduction occurred in February 1974. One of the SLA's demands was a free food program. Patty's father, Randolph Hearst, publisher of the San Francisco Examiner,

arranged for such a project in Oakland. Then-governor Ronald Reagan responded to the long line of people wait- ing for free food: "I hope they all get botulism."

In June, I disclosed in the Berkeley Barb the non-fact that I had been brought to meet Patty underground. I wrote: "Since there is nothing of investigatory value in the interview, I will not speak with the FBI. Nor am I able to supply any information that might earn me a $50,000 reward. Tania insisted that she had not been brainwashed. My impression is that she was."

In view of conspiracy researcher Mae Brussell's track record with the Watergate story (titled "Why Was Martha Mitchell Kidnapped?"), I decided to devote an entire issue of The Realist to her documented analysis, "Why Was Patricia Hearst Kidnapped?"—the thrust of which was that the SLA was essentially an espionage plot orchestrated by our secret government in order to distort the message of idealism.