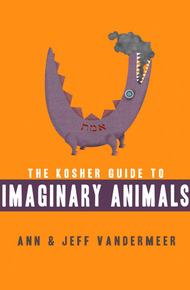 Ann VanderMeer was the fiction editor for Weird Tales for five years and won the Hugo for her work there. She is also an award-winning publisher, and co-editor with Jeff on Best American Fantasy, Fast Ships, Black Sails (pirates), Steampunk, New Weird, The Weird, The Thackery T. Lambshead Cabinet of Curiosities, and many more.

Jeff VanderMeer is a three-time winner, thirteen-time finalist for the World Fantasy Award. His Wonderbook: The Illustrated Guide to Creating Imaginative Fiction, the world's first full-color, image-based writing guide, is now out from Abrams Image. His Southern Reach trilogy (Annihilation, Authority, Acceptance) will be published by FSG, HarperCollins Canada, and The Fourth Estate (UK) in 2014, as well as 12 other countries. The film rights have been optioned by Scott Rudin Productions and Paramount Pictures. Prior novels include the Ambergris Cycle (City of Saints & Madmen, Shriek: An Afterword, and Finch) and Veniss Underground. His short fiction has appeared in American Fantastic Tales (Library of America), Conjunctions, and many others. He writes nonfiction for The Washington Post, the LA Times, The Guardian, and many others. He has lectured at MIT and the Library of Congress and helps run the Shared Worlds teen SF/Fantasy writing camp out of Wofford College.

The Kosher Guide to Imaginary Animals by Ann & Jeff VanderMeer

A perfect gift book, this sumptuously illustrated and whimsically bite-sized bestiary is the definitive—in fact, only—guide to the kosherness (kashrut) of imaginary animals. It is an undomesticated romp from A to Z, including E.T., hobbits, Mongolian Death Worms, and the elusive chupacabra. This fantastical journey embarks upon a hilariously contentious debate between the alter-ego of acclaimed fantasist Jeff VanderMeer (a.k.a. Evil Monkey) and his editor/collaborator wife Ann VanderMeer (Steampunk, The New Weird). Once and for all, burning questions passed down through the ages will be addressed, such as: Is a vegetable-lamb a vegetable or a lamb? Does licking the Pope make you trayf? What exactly is a Pollo Maligno? Does a Sasquatch taste stringy? Brought to you by the same creative team that gave you The Thackery T. Lambshead Pocket Guide to Eccentric and Discredited Diseases, this irreverent abecedary is the must-have present for anyone seeking to broaden their imaginary culinary experiences guilt-free.

Two years ago, my husband and I were taking a hike in the woods. I don't know how it came up, but at some point we started talking about the "kosherness" of certain animals. With Passover fast approaching, what you can and cannot eat was on my mind. The subject led to the silliness of trying to figure out what imaginary animals might be kosher. As we bantered back and forth, we decided that we were having too much fun, which meant it might be fun for our readers, too. So we did a blog post in honor of Passover.

Jeff gathered up a list of imaginary animals. "Evil Monkey," Jeff's blogging alter ego, and I debated the qualities and virtues of each one. (I was armed with several texts, including the Etz Hayim.) Then we put the results online, and before we knew it, word had spread — and spread! Not only was the blog post picked up by the pop culture sites Boing Boing and Jewcy, but people all over the world were linking to it — and talking about it. Debates over our "discussions" blossomed on other blogs. The original post generated hundreds of comments and the links generated even more. Swedish National Public Radio even did a story on it. (We couldn't understand a word of it, but there was a photo of a Wookiee from Star Wars — are they kosher?). Soon, we were approached by Tachyon Publications to do a book — in part to celebrate their fifteenth year of publication — and we said why not? Stranger things have happened, but we couldn't have imagined when we were talking on our hike that a book would result from our original discussion!

However, one thing you can be sure of: Rules about food have plagued the Jews ever since G-d gave us manna. Even that had rules — only take enough for your family (don't be a greedy-guts). Eat it all because if you save any it will be rotten and maggoty the next day. Of course, the Jews had to try it and it was all rotten and maggoty, teaching us to trust that G-d will provide fresh manna each day.

Then there was the bitching the Jews did in the desert when they got tired of eating manna from heaven every single day. And after all their bitching (which, by the way, they do a lot; poor, poor Moses), Moses pleads with G-d to provide something different. And G-d, having the kind of sense of humor that came up with a creature like the platypus, decides to shower the Jews with tons and tons of meat — until they are drowning in it.

Jews and food, food and Jews. We have food-related traditions with just about every single holiday. Passover? Here, eat some stale crackers that we call matzah. Hanukkah? Potato pancakes and chocolate coins. Purim? Let's have some yummy hamentaschen pastry. Rosh Hashanah? Round challah, and maybe a fish head (don't ask!). Even with Yom Kippur, food figures into it because there's a lack of food. The infamous Jewish Mother is always trying to get her children to eat.

We also have a promise of the most amazing feast of food in the afterlife (or as some call it: The World to Come, Ha'Olam Habah). At this time G-d will provide a banquet consisting of Leviathan, Behemoth, and Ziz: three creatures created just for this purpose (or so we are told). Leviathan is the king over all sea animals, Behemoth over the land, and Ziz over the sky. So we have meat, seafood, and fowl to look forward to, not to mention all kinds of vegetables. . .but I am getting ahead of myself.

Who else but Jews would have a T-shirt that says: "CHOLENT — It keeps you going and going and going." (If you don't know what cholent is, look it up, kiddies!)

So, with all of that tradition, why not a kosher guide for imaginary animals? Who knows? You might get caught up in some kind of weird fantasy world where you are faced with mothmen and unicorns.

And you will need to know.