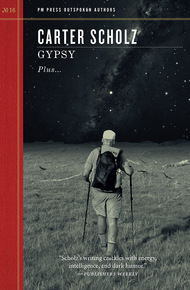 Born in New York, educated on the East Coast, Scholz set foot in Berkeley in the 1970s—and never looked back. Considered a "writer's writer" he is perhaps the best-kept secret in SF, with a prophetic voice that points to the future and rarely looks back.

Since his debut in Terry Carr's legendary Ace Specials of the 1980s, Carter Scholz has occupied an enviable, if demanding, position on the cutting edge of modern speculative literature (vulgarly called SF).

Proudly debuting in this volume, Gypsy is his first major work since his 2002 nuclear thriller Radiance. An interstellar adventure grounded in the hard science of accurate physics and biology, Gypsy soars far beyond the heliosphere of conventional science fiction. Jettisoning the easy warp-drives of fantasy and space opera, Scholz chronicles with chilling realism the epic voyage of a team of far-seeing scientists, who crowdsource a secret starship and abandon the doomed Earth for the Alpha Centauri system, our nearest stellar neighbor and last desperate chance. Heartbreak and hope collide in this moving and visionary tale.

An epistolary story about a story, "The Nine Billion Names of God," uses a classic SF text to deconstruct literary deconstruction itself, with hilarious results. In the wickedly droll "Bad Pennies," a spy tasked with trashing a foreign economy testifies before a complacent Congress. Quietly furious, "The United States of Impunity" is an alarming look under the tent of today's political sideshow. Adults only.

And Featuring: "Gear. Food. Rocks."—our Outspoken Interview, in which a postmodern Renaissance man charts the synergies and dissonances of a career that embraces both literary and musical composition, reveals the hidden link between winemaking and deep space astronomy, and tells you how to steal his car.

The living being is only a species of the dead, and a very rare species.

When a long shot is all you have, you're a fool not to take it.

The launch of Earth's first starship went unremarked. The crew gave no interviews. No camera broadcast the hard light pulsing from its tail. To the plain eye, it might have been a common airplane.

The media battened on multiple wars and catastrophes. The Arctic Ocean was open sea. Florida was underwater. Crises and opportunities intersected.

World population was something over ten billion. No one was really counting anymore. A few billion were stateless refu- gees. A few billion more were indentured or imprisoned.

Oil reserves, declared as recently as 2010 to exceed a trillion barrels, proved to be an accounting gimmick, gone by 2020. More difficult and expensive sources—tar sands in Canada and Venezuela, natural gas fracking—became pri- mary, driving up atmospheric methane and the price of fresh water.

The countries formerly known as the Third World stripped and sold their resources with more ruthless abandon than their mentors had. With the proceeds they armed themselves.

The US was no longer the global hyperpower, but it went on behaving as if. Generations of outspending the rest of the world combined had made this its habit and brand: arms mer- chant to expedient allies, former and future foes alike, start- ing or provoking conflicts more or less at need, its constant need being, as always, resources. Its waning might was built on a memory of those vast native reserves it had long since expropriated and depleted, and a sense of entitlement to more. These overseas conflicts were problematic and carried wildly unintended consequences. As the president of Venezuela put it just days before his assassination, "It's dangerous to go to war against your own asshole."

The starship traveled out of our solar system at a steep angle to the ecliptic plane. It would pass no planets. It was soon gone. Going South. SOPHIE (2043)

Trying to rise up out of the cold sinking back into a dream of rising up out of the. Stop, stop it now. Shivering. So dark. So thirsty. Momma? Help me?

Her parents were wealthy. They had investments, a great home, they sent her to the best schools. They told her how privileged she was. She'd always assumed this meant she would be okay forever. She was going to be a poet.

It was breathtaking how quickly it went away, all that okay. Her dad's job, the investments, the college tuition, the house. In two years, like so many others they were penniless and living in their car. She left unfinished her thesis on Louis Zukofsky's last book, 80 Flowers. She changed her major to Information Science, slept with a loan officer, finished grad school half a million in debt, and immediately took the best-paying job she could find, at Xocket Defense Systems. Librarian. She hadn't known that defense contractors hired librarians. They were pretty much the only ones who did anymore. Her student loan was adjustable rate—the only kind offered. As long as the rate didn't go up, she could just about get by on her salary. Best case, she'd have it paid off in thirty years. Then the rate doubled. She lost her apartment. XDS had huge dorms for employees who couldn't afford their own living space. Over half their workforce lived there. It was indentured servitude.

Yet she was lucky, lucky. If she'd been a couple of years younger she wouldn't have finished school at all. She'd be fighting in Burma or Venezuela or Kazakhstan.

At XDS she tended the library's firewalls, maintained and documented software, catalogued projects, fielded service calls from personnel who needed this or that right now, or had forgot- ten a password, or locked themselves out of their own account. She learned Unix, wrote cron scripts and daemons and Perl rou- tines. There was a satisfaction in keeping it all straight. She was a serf, but they needed her and they knew it, and that knowledge sustained in her a hard small sense of freedom. She thought of Zukofsky, teaching for twenty years at Brooklyn Polytech. It was almost a kind of poetry, the vocabulary of code.

Chirping. Birds? Were there still birds? No. Tinnitus. Her ears ached for sound in this profound

silence. Created their own.

She was a California girl, an athlete, a hiker, a climber. She'd been all over the Sierra Nevada, had summited four 14,000-footers by the time she was sixteen. She loved the backcountry. Loved its stark beauty, solitude, the life that survived in its harshness: the pikas, the marmots, the mountain chickadees, the heather and whitebark pine and polemonium.