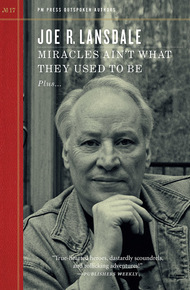 Joe R. Lansdale is the author of more than thirty novels, including the Edgar Award–winning Hap and Leonard mystery series (Mucho Mojo, Two Bear Mambo) and the New York Times Notable Book The Bottoms. More than two hundred of his stories have appeared in such outlets as Tales from the Crypt and Pulphouse, and his work has been adapted for The Twilight Zone and Masters of Horror. His work has been collected in eighteen short story collections, and he has edited or coedited over a dozen anthologies.

Miracles Ain’t What They Used to Be by Joe R. Lansdale

Arguably (and who doesn't like to argue?) the world's bestselling cult author, Joe R. Lansdale is celebrated across several continents for his dark humor, his grimly gleeful horror, and his outlaw politics. Welcome to Texas. With hits like Bubba Ho-Tep and The Drive-In the Lansdale secret was always endangered, and the spectacular new Hap and Leonard Sundance TV series is busily blowing whatever cover Joe had left.

Backwoods noir some call it; others call it redneck surrealism. Joe's signature style is on display here in all its grit, grime, and glory, beginning with two (maybe three) previously unpublished Hap and Leonard tales revealing the roots of their unlikely partnership.

Plus...  A hatful and a half of Joe's notorious Texas Observer pieces that helped catapult him from obscurity into controversy; and "Miracles Ain't What They Used to Be," Lansdale's passionately personal take on the eternal tussles between God and Man, Texas and America, racism and reason—and religion and common sense.

And Featuring: Our Outspoken Interview, in which piney woods dialect, Bible thumpery, martial arts, crime classics and Hollywood protocols are finally awarded the attention they deserve. Or don't.

Leonard looked up from the newspaper he was reading, a little rag that was all that was left of our town paper, the bulk of it now being online, and glanced at me.

"So I'm reading in the paper here about how the high school, hell, grade school, all the grades, they got a no-fighting policy, no matter who starts it. Some guy jumps you on the playground, lunch break, or some such, and you whack him in the nose so he'll leave you alone, you both go to detention."

"Can't have kids fighting. You and me, we fought too much. Maybe it's not a good thing to learn, all that fighting. We met at a fight, remember?"

"Horseshit," Leonard said, and put the paper down. "Look here, Hap, I know a thing about you, and I know how it was for me at school, with integration and all, and I don't think it works like that, and shouldn't. This whole thing about fighting to protect yourself, and getting the same punishment as the one who picks on you, how's that teaching common sense?"

"Think on it. There's this thing I know about you, let's call it the parable of the stick."

I knew exactly what he was talking about. I said, "Okay, let's call it that." "You moved here from a smaller school, and I know you

had some problems. We've talked about it. I wasn't there, but I know the drill. Try being black in a formerly all-white school sometime."

"You came to school from some little town, to Marvel Creek. And there was this bully, a real asshole, bigger than you, and you were small then, right?"

"Not that I'm a behemoth now."

"No, you lack my manly physique, but you've grown into something solid. Then, though, you were a skinny little kid with hay fever and a plan to do something with your life. Which, of course, you failed to do. What were you going to be, by the way?"

"Ah, that's right. Hell, I knew that. It's been so long since you mentioned it, I forgot. Yeah, a writer. So you move here, a poor country kid with shabby clothes and his nose in a book, and this guy, this big kid, he picks on you. He does it everyday. Calls you book worm or some such, maybe pencil dick. So what do you do? You do the right thing. You go to the princi- pal and tell him the kid's fucking with you, and the principal says, okay, and he pulls the mean kid in and talks to him. So what's the mean little shit do the very next day?"

"Double beats the shit out of me."

"There you have it, but you're not fighting back, right?"

"Oh, I fought back. I just wasn't any good at it then. Probably why I learned martial arts."

"Sure it is. I did the same thing. I wasn't so little and didn't lose too much, but I was a black kid in a formerly all white school, and then there was my extraordinary beauty they were jealous of."

"Oh yeah, the black anaconda that knows no friends. So this happens a few days in a row, this mean kid ignoring the principal, him not giving a greased dog turd what the principal said. You go home, and your dad, he sees you got a black eye and busted lip, and what does he do?"

"He tells me if he's bigger than me, bring him down to size."

"Right. He says, 'Hap, go out there and get yourself a good stick, cause there's plenty of them lying around on the edge of the playground by the woods. You get that big stick, and you lay for him, and when he don't expect it none, you bring that sick down on him so hard it will cause you to come up off the ground. Don't put his eye out with it, and don't hit him in the head, unless you have to, but use that stick with all your force, and if something breaks on him, well, it breaks. You get a licking every day and you don't do something back, taking that licking and being licked is gonna turn into a life- time business.' He told you that, right?"