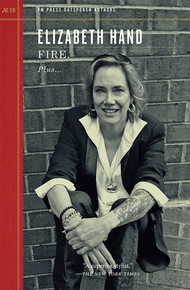 Hand, Elizabeth, or Liz as she's known to her colleagues, students, and devoted fans, is a maverick in modern fiction: a fearless literary sojourner whose award-winning novels and short stories mix murder and magic, high fantasy and post-punk noir in extravagant and unforgettable new ways.

The title story, "Fire."—written especially for this volume—is a harrowing postapocalyptic adventure in a world threatened by global conflagration. Based on Hand's real-life experience as a participant in a governmental climate change think tank, it follows a ragtag cadre of scientists and artists racing to save both civilization and themselves from fast-moving global fires.

"The Woman Men Didn't See" is an expansion of Hand's acclaimed critical assessment of author Alice Sheldon, who wrote award-winning SF as "James Tiptree, Jr." in order to conceal identity from both the SF community and her CIA overlords. Another nonfiction piece, "Beyond Belief," recounts her difficult passage from alienated teen to serious artist.

Also included are "Kronia," a poignant time-travel romance, and "The Saffron Gatherers," two of Hand's favorite and less familiar stories. Plus: a bibliography and our candid and illuminating Outspoken Interview with one of today's most inventive authors.

He had almost been as much a place to her as a person; the lost domain, the land of heart's desire. Alone at night she would think of him as others might imagine an empty beach, blue water; for years she had done this, and fallen into sleep.

She flew to Seattle to attend a symposium on the Future. It was a welcome trip—on the East Coast, where she lived, it had rained without stopping for thirty-four days. A meteoro- logical record, now a tired joke: only six more days to go! Even Seattle was drier than that.

She was part of a panel discussion on natural disasters and global warming. Her first three novels had presented near-fu- ture visions of apocalypse; she had stopped writing them when it became less like fiction and too much like reportage. Since then she had produced a series of time-travel books, wish- fulfillment fantasies about visiting the ancient world. Many of her friends and colleagues in the field had turned to similar themes, retro, nostalgic, historical. Her academic background was in classical archeology; the research was joyous, if exhaust- ing. She hated to fly, the constant round of threats and delay.

The weather and concomitant poverty, starvation, drought, flooding, riots—it had all become so bad that it was like an extreme sport now, to visit places that had once unfolded from one's imagination in the brightly colored panoramas of 1920s postal cards. Still she went, armed with eyeshade, earplugs, music, and pills that put her to sleep. Behind her eyes, she saw Randall's arm flung above his head, his face half-turned from hers on the pillow. Fifteen minutes after the panel had ended she was in a cab on her way to SeaTac. Several hours later she was in San Francisco.

He met her at the airport. After the weeks of rain back East and Seattle's muted sheen, the sunlight felt like something alive, clawing at her eyes. They drove to her hotel, the same place she always stayed; like something from an old B-movie, the lobby with its ornate cast-iron stair-rail, the narrow front desk of polished walnut; clerks who all might have been played by the young Peter Lorre. The elevator with its illuminated dial like a clock that could never settle on the time; an espresso shop tucked into the back entrance, no bigger than a broom closet.

Randall always had to stoop to enter the elevator. He was very tall, not as thin as he had been when they first met, nearly twenty years earlier. His hair was still so straight and fine that it always felt wet, but the luster had faded from it: it was no longer dark-blond but grey, a strange dusky color, almost blue in some lights, like pale damp slate. He had grey-blue eyes; a habit of looking up through downturned black lashes that at first had seemed coquettish. She had since learned it was part of a deep reticence, a detachment from the world that sometimes seemed to border on the pathological. You might call him an agoraphobe, if he had stayed indoors.

But he didn't. They had grown up in neighboring towns in New York, though they only met years later, in DC. When the time came to choose allegiance to a place, she fled to Maine, with all those other writers and artists seeking a retreat into the past; he chose Northern California. He was a journalist, a staff writer for a glossy magazine that only came out four times a year, each issue costing as much as a bottle of decent sémil- lon. He interviewed scientists engaged in paradigm-breaking research, Nobel Prize–winning writers; poets who wrote on their own skin and had expensive addictions to drugs that subtly altered their personalities, the tenor of their words, so that each new book or online publication seemed to have been written by another person. Multiple Poets' Disorder, Randall had tagged this, and the term stuck; he was the sort of writer who coined phrases. He had a curved mouth, beautiful long fingers. Each time he used a pen, she was surprised again to recall that he was left-handed. He collected incunabula—Ars oratoria, Jacobus Publicius's disquisition on the art of memory; the Opera Philosophica of Seneca, containing the first written account of an earthquake; Pico della Mirandola's Heptaplus— as well as manuscripts. His apartment was filled with quarter- sawn oaken barrister's bookcases, glass fronts bright as mir- rors, holding manuscript binders, typescripts, wads of foolscap bound in leather. By the window overlooking the Bay, a beau- tiful old mapchest of letters written by Neruda, Beckett, Asaré. There were signed broadsheets on the walls, and drawings, most of them inscribed to Randall. He was two years younger than she was. Like her, he had no children. In the years since his divorce, she had never heard him mention his former wife by name.

The hotel room was small and stuffy. There was a wooden ceiling fan that turned slowly, barely stirring the white cur- tain that covered the single window. It overlooked an airshaft. Directly across was another old building, a window that showed a family sitting at a kitchen table, eating beneath a fluorescent bulb.