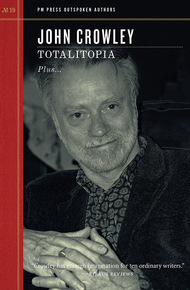 John Crowley was born in 1942, grew up in Greenwich Village, Vermont, Kentucky, and northern Indiana, graduated from Indiana University, and after moving to New York worked writing documentary films. He began publishing fiction in 1975, starting with three science fiction novels (The Deep, Beasts, and Engine Summer). His later novels are less categorizable. He won the Award for Literature of the American Academy of Letters in 1992 and the World Fantasy Award three times. His novels include Little, Big; the four-volume Ægypt Cycle, and most recently, Four Freedoms. His documentary films include studies of the 1939 World's Fair, the Tiananmen Square incident, and the Pearl Harbor attack. Since 1993 he has taught creative writing at Yale University.

John Crowley's all-new essay "Totalitopia" is a wry how-to guide for building utopias out of the leftovers of modern science fiction. "This Is Our Town," written especially for this volume, is a warm, witty, and wonderfully moving story about angels, cousins, and natural disasters based on a parochial school third-grade reader. One of Crowley's hard-to-find masterpieces, "Gone" is a Kafkaesque science fiction adventure about an alien invasion that includes door-to-door leafleting and yard work. Perhaps the most entertaining of Crowley's "Easy Chair" columns in Harper's, "Everything That Rises" explores the fractal interface between Russian spiritualism and quantum singularities—with a nod to both Columbus and Flannery O'Connor. "And Go Like This" creeps in from Datlow's Year's Best, the Wild Turkey of horror anthologies.

Plus: There's a bibliography, an author bio, and of course our Outspoken Interview, the usual cage fight between candor and common sense.

This Is Our Town

When I was young I lived in a place called Timber Town. It can be found in a book called This Is Our Town, which is part of the "Faith and Freedom" series of readers, and was written by Sister Mary Marguerite, SND (which stands for Sœurs de Notre-Dame) and published by Ginn and Company, copyright 1953. Catholic children read it in the fourth and fifth grades.

Timber Town was a small river town, where exactly the book never said, but it would have to be somewhere in the Northeast, maybe in Pennsylvania. Upriver from Timber Town was a place called Coalsburg, which was where the trains from the mines came down to load their coal onto barges. Downriver from Timber Town was a city of mills called Twin City, because a part of the city was on one side of the river and another, poorer part was on the other side. These names were easy to remember and understand, even for young children. River ferries and trains ran from town to town and farther, down somewhere to the sea I suppose. In the double title page you can see us kids high on a hillside, looking over the river valley and the mills and the church. We wear the saddle shoes and the striped shirts and flaring flowered skirts we did wear then, and in the pale sky are pillowy clouds and the black check-marks of flying birds. I can still feel the wind.

The book tells stories of then and now, of the flood that hurt so many houses in Timber Town and nearly washed away Coalsburg: I saw all that, I was there. The book has stories of long-before, when miracles happened to children like us in other lands, and stories of saints like St. John Bosco, after whom our school was named. But most of the stories are about our town, and the nuns in our school, and the priests in the church, and the feast days and holidays of the months one after another. The stories are all true and of course they happened to us or we caused them to happen, or they wouldn't be in the book; but the book never told everything about us, nor all that we could do and did.

It has been a long time now since I last saw my guardian angel. Of course I know she's here with me all the time whether I can see her or not, and I can hear myself tell myself the words she would once say to me to guide me and keep me from harm, but I haven't seen her as herself, the way I guess all kids can.

I remember how she stood behind me at my First Communion, her hand on my shoulder, and how it was the same for all of us in white kneeling at the rail as the priest came closer to us, going from one to the next. We never talked about when or how we saw our guardian angels but we all knew. My brother Thad walked along beside the priest, in his cassock, with his hand on his breast, carry- ing the little tray on a stick (the paten he told me it's called) to hold under our chins as Father Paine placed the Host on our tongues, in case some tiny fragment of the Body of Christ fell off, because every fragment of the Host is God, at least for a while. Perhaps because it was the first time, we didn't feel—at least I didn't—the wondrous warmth and sweetness, the dark power too, that comes with swal- lowing God. It would come gradually, and we would long for it.

After Mass was done we all went out into the sun and the trees in flower and marched—or went in procession anyway—around the church to the white statue of Mary, crowned the previous Sunday with pink roses that had shed petals all around the statue's base. I never much liked this statue, white as the plaster casts in the library, her eyes unable to see. And there we sang.

My white dress and my little white missal and my white kid gloves were all put away and I was sitting on the back steps wear- ing dungarees, my feet bare, and she said (my guardian angel) that a sad thing about being an angel is that you can never partake of Communion like living people can. Angels know that it is a won- derful thing and they can know what their person feels, because they know their person and they know God. But they can never have it themselves.

I asked: Does that make an angel sad? Well, my angel said, nothing really makes an angel sad. And then she clutched her knee in her linked hands, just the

way you do when you're sitting with crossed legs, and said There are angels for other things than people. Every animal in the world has a kind of angel, a little one or a big one, who's born with the animal and vanishes away when the animal dies.

Will you vanish away? I asked, but she laughed the way she does and said I am yours forever and will always be with you.