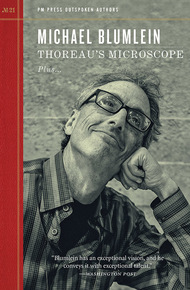 Michael Blumlein is a medical doctor and a respected SF writer whose novels and stories have introduced new levels of both horror and wonder into the fiction of scientific speculation. His work as a cutting-edge medical researcher and internist at San Francisco's UCSF Medical Center informs his acclaimed stories and novels as they explore what it means to be truly—if only temporarily—human.

The innovative novels and stories of Michael Blumlein, MD, have introduced new levels of both terror and wonder into the fiction of scientific speculation. His work as a medical researcher and internist at San Francisco's UCSF Medical Center informs his tales of biotech, epigenetics, brain science, and what it means to be truly——if only temporarily——human.

Our title piece, "Thoreau's Microscope," inspired by a historic High Sierra expedition with Kim Stanley Robinson and Gary Snyder and first published here, is a stunning mix of hypothesis and history, in which the author inhabits Thoreau's final days to examine the interaction of impersonal science and personal liberation. A journey as illuminating as it is intimate.

And Featuring: Our overly intrusive Outspoken Interview, in which the ethics of experimental medicine, animal surgery, the poetry of prose, cult film acclaim, Charles Ludlam, Darwin, and gender dysphoria all submit to examination.

Paul and Me for Terry Parkinson

I first met Paul in '71, the year I got out of college. I was bumming around the country, crashing in city parks and church basements, cadging food and companionship, avoiding the future. In keeping with the spirit of the times, I considered my carefree and unfettered existence both highly evolved and intrinsically righteous, when in truth I had no fucking idea. It didn't matter. My girlfriend was in New York City, living in a commune and doing guerilla theater. My ex-girlfriend was in Vancouver, BC, with her boyfriend, who'd fled the U.S. because of the draft. Those two women were ballast for me. In my imagination anyway, they were fixed points and gave me the security to do what I wanted in between.

I'd been in Bozeman a few days when I was busted for stealing a sandwich. After a night in jail, the judge threw me out of town. The first ride I got was headed to Seattle, but I wasn't ready for another city quite yet. I got out in Wenatchee, caught a ride to Carlton and two days later, a pack on my back and enough brown rice to last a week, was in the high country north of Lake Chelan.

There is nothing like the mountains to feel simultaneously large and small. Incomparably large, I should say, and insignificantly small. Distances are vast, yet life, because conditions are so exacting, is condensed. At the higher elevations the trees and wildflowers, the voles that skitter in and out of rocks, even the mosquitoes seem lil- liputian. Which made Paul, at first glance, all the more striking.

He was kneeling by the edge of a stream, taking a drink of water. He had on those trademark jeans of his, the navy blue suspenders, the plaid shirt. From a distance he looked as big as a house, up close even bigger. Because of his size I expected him to be oafish, but he was nothing of the kind. He moved with remarkable grace, dipping his cupped hand delicately into the water then sipping from it with the poise of a lady sipping tea.

I was alone. It was July, and I had camped by a lake in a high meadow two valleys over. That morning I had gone exploring, follow- ing the drainage creek down as it fell through a boulder-strewn slope of fir and pine. An hour of walking brought me to the confluence of another, similar-sized creek, at which point the water picked up force. The trail leveled off for about a hundred yards, then dropped precipitously. This was the site of a magnificent waterfall, sixty, seventy feet high. Paul was at the far end of a deep pool carved by the water. His hair was dark and short, his beard trim, his lips as red as berries. Waves of reflected sunlight lit his face. He had the eyes of a dreamer.

The trail zigzagged down a granite cliff, coming out near the base of the waterfall. The noise of the falls was deafening and masked my ap- proach. By the time he noticed me, I wasn't more than a stone's throw away. He stopped drinking, and a frown crossed his face. Quickly, this gave way to a stiff kind of courtesy, a seemliness and a handsome, though remote, civility. His public persona. I apologized for intruding and was about to continue on my way when he motioned me over.

Standing, he was thirty feet tall; kneeling, nearly half that height. His thighs when I first met him were as wide as tree trunks; his bi- ceps, like mountains. As I drew near, he stood up and stretched, mo- mentarily blotting out the sky. Then, as though conscious of having dwarfed me, he sought to put me at ease by sitting, or leaning rather, against a pine, which, though venerable, bent beneath him like rubber. It was he who spoke first. His voice was deep and surprisingly

"Hello," I answered. "Nice day." "Incredible." He looked at the sky, which was cloudless. Sunlight streamed

down. "Doesn't get any better." "Can't," I replied insipidly. An awkward silence followed, then he asked if I came here often.

"Every few months. It's a little hot for me this time of year. In the summer I tend to stay farther north."

I was wearing a T-shirt and shorts. He was in long pants and a flannel shirt with the sleeves partway rolled up. I suggested that he might be more comfortable in other clothes.

"I like to stay covered," he replied, which nowadays would mean he wanted to keep out of the sun but then was more ambiguous. I searched for something else to keep the conversation alive.

"So what made you come?" I asked. "South, I mean." He shrugged. "I don't know. I had an urge." I nodded. Urges I knew about. My whole last year of college

had been one urge after another. Sex, drugs, sit-ins. As a life, it was dizzying. And now, having hiked into the high country with the lofty purpose of getting away from it all, of finding a little perspective, here I was talking to a man as tall as a tower. I felt as dizzy as ever, and I was humbled by the realization that the very impulsiveness I was running from was what had gotten me here to begin with. I also felt a little lightheaded, and thinking it might in part be a product of hunger, I took out a bag of peanuts. I offered him some, but he shook his head.

"I'm allergic to nuts. I blow up like a blimp."