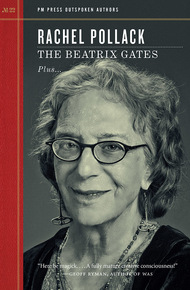 Rachel Pollack melds the literary, the political, and the spiritual in her own unique way. An award-winning SF and fantasy author (Unquenchable Fire and Godmother Night), she is also an esteemed Tarot Grand Master with followers and students around the world. A progressive voice in the transgender community and a trusted guide to the ancient traditions of spiritualism, she has been for decades a teacher of writing at Goddard College.

The Beatrix Gates by Rachel Pollack

Rachel Pollack is a sorceress, a wizard with words who spins together the spiritual, the political, and the passionate in her unique, indeed inimitable, tales. An award-winning SF and Fantasy author, she is also an esteemed Tarot Grand Master with devotees and students around the world. A progressive voice in the transgender community and a trusted guide to the ancient traditions of shamanism, she writes of shimmering and dangerous worlds that have never been imagined before—much less explored. Her queer cult favorite "The Beatrix Gates" draws on magic realism, quantum science, memoir, and myth to tell the story of a girl born not in the wrong body but in the wrong universe.

Plus… "Trans Central Station," written especially for this volume, is Pollack's personal and penetrating take on the transgender experience then and now—and tomorrow? "Burning Beard" is a fiercely revisionist Old Testament tale of plague and prophecy told through a postmodern prose of, shall we say, many colors. "The Woman Who Didn't Come Back" is about just what it says it's about.

And Featuring: Our Outspoken Interview, which tells us all about comics history, the automotive origins of Tarot, the benefits of Nerd celebrity, and why the Sun exists. It will be on the test.

The Woman Who Didn't Come Back

In the old days, when a woman died, she returned to life after nine days.

On the first day after her death her friends laid her body on her bed. They tied ribbons around the hands and feet and placed a stone over the mouth. Then they would sit around the bed, as silent as their dead sister. Those who were bored, or sore, or hadn't liked the dead woman very much, told them- selves they would need the same thing done for them someday. And they kept sitting.

On the second day they got up and cooked, their first hot food in twenty-four hours. When they were sitting round the bed again, they began to speak, telling what they knew about the woman. They told of favors she'd done them, fights they'd had with her. Someone might tell how the woman had nursed her when she had the flu, another how the woman had cheated her when they'd shared a house. They told whatever they could remember, the whole day long. The third day they buried her.

On the fourth, fifth, and sixth days they took care of their sister's business, paying her debts, writing letters for her, sell- ing old clothes and useless junk, leaving only the things she would need for starting over. If the woman had enemies, some of the friends put on masks of her face and visited the people, doing what they could to satisfy the anger. When they got tired they reminded themselves of a woman named Carla, who had made so many enemies before her death it seemed like half the women in town were putting on masks and visiting the other half.

On the seventh and eighth days they prepared for the par- ty. They hung banners in the woman's colors, they decorated the bar with her picture, they cooked or baked all her favorite foods. They cleaned and polished the bar, the furniture, and even the silverware. They set out baskets of flowers up and down the street.

On the ninth day they paraded from the woman's house to the bar, setting out at sundown with drums and whistles, arriving just as the last sigh of daylight faded from the sky. Then the party began. It went on for hours, everyone getting drunk or stoned, playing the woman's favorite records, until all of a sudden, when it seemed they'd forgotten about the woman herself, the door opened and there she stood.

The returned women always came in slightly wet, hair damp and curly, skin glistening. They walked inside and looked around, and everyone stopped, the only noise coming from a record player, or someone who'd tripped against a table or knocked over a glass.

After a moment someone would rush up with a drink, someone else with a roll baked in the shape of the Earth and covered with poppy seeds. As soon as the woman had taken a sip and a bite everyone started to talk again. But the nervous- ness would last, people spilling drinks or banging into each other. For there was something they had to do, even though no one knew why. Finally one of the younger women would go up to the returned woman and say to her, "What was it like?"

The woman would think a moment, maybe look away. "Sorry," she'd say, "I'm not allowed to tell you that." And then all the women would go back to dancing and getting drunk.

Sometime in the late evening, just as everyone was think- ing it was time to go home, the woman who had come back would look around the room and see someone, maybe an ex- lover, maybe someone she'd never noticed before. She would ask her to dance. When the two of them had gone off together the party could end.