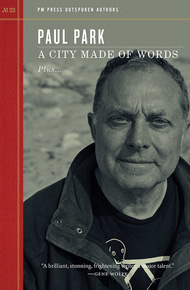 A native of New England with Southern roots, Paul Park climaxed his "wanderjahr" in Asia and the Middle East with his Sugar Rain Trilogy, which established him immediately as a writer to watch. His fascinated readers have since followed him into Christian theology, the anatomy of colonialism, and the limits and possibilities of metafictional narrative. His diverse work includes narrations of museum exhibits with artist Steven Vitiello, and lectures on storytelling at Comicon and nonhuman sentience at Berlin's Max Planck Institute. Meanwhile he has taught writing in a thirty-year career at major universities. He lives in western Massachusetts and currently teaches at Williams College.

A City Made of Words by Paul Park

Paul Park is one of modern fiction's major innovators. With exotic settings and characters truly alien and disturbingly normal, his novels and stories explore the shifting interface between traditional narrative and luminous dream, all in the service of a deeper humanism.

"Climate Change," original to this volume, is an intimate and erotic take on a global environmental crisis. "A Resistance to Theory" chronicles the passionate (and bloody) competition between the armed adherents of postmodern literary schools. "A Conversation with the Author" gives readers a harrowing look behind the curtains of an MFA program. In "A Brief History of SF" a fan encounters the ruined man who first glimpsed the ruined cities of Mars. "Creative Nonfiction" showcases a professor's eager collaboration with a student intent on wrecking his career. The only nonfiction piece, "A Homily for Good Friday," was delivered to a stunned congregation at a New England church.

Plus: Our candid and colorful Outspoken Interview with one of today's most accomplished and least conventional authors, in which personal truth is evaded, engaged, and altered, all in one shot.

A Short History of Science Fiction, or The Microscopic Eye

This course was taken with John Palmer, and the true secret of his mysterious power of vision detected in an instant. . . . The eye examined was exceedingly flat, very thin, with large iris, flat lens, immense petira, and wonderfully dilated pupil. The effect of the shape was at once apparent. It was utterly impossible to see any object with distinctness at any distance short of many thousands of miles. —W.H. Rhodes, "The Telescopic Eye," 1876

He was there when I arrived in the morning, there when I left at night: an old man who had staked out as his place of business a square yard of sidewalk next to the revolving door, in which location he sold pencils and matches when he had them. Or if he did not he stood there anyway, marking time as did so many in those days, dressed in a threadbare blue suit and dirty collar, wearing around his neck a neatly lettered placard—"Blind."

All winter and into spring, in downtown San Francisco I saw him every day outside the bank where I worked. At that time I had taken up the habit of attending more than the usual complement of religious services. Nowadays I don't participate at all. But that year I was a vestryman at an Episcopal chapel, and for Holy Week I was in charge of the Maundy Thursday celebration, during which our rector intended to wash the feet of twelve lucky indigents. Our chapel sponsored a soup kitchen where I could have easily found the requisite number or indeed any number at all, the evening crowd outside the basement was so large. But I was not drawn to these citizens, farmers from Texas and Oklahoma who had come to San Francisco as a last resort, as if the city were a mesh at the bottom of a drain. No matter how poor they were, they could always find money for tobacco and alcohol. Their leathery skins and flat accents were alien to me, and I was concerned, also, by the prospect of awakening any hope at all in them, any expectation of special treatment or potential employment, by their participation in what was after all a useless kind of spectacle.

Instead, I imagined I could explain myself better to the match-seller outside my building, where I worked as a loans of- ficer. His clothes marked him as a city resident, and his voice as he thanked me on some mornings for my nickel or even once my dime seemed to suggest a native of California. A deserving unfortunate, I thought, the kind of person our Lord specifi- cally enjoins us to protect.

You will forgive me if I speak ironically. I was just about at the end of my tether, and I thought his blind eyes would register no disappointment. I did not ask him on Monday or on Tuesday, but on Wednesday evening I stopped in front of him to stammer out my request. The crowds in the streets had diminished, and we stood alone beside the granite front.

He raised his face to look at me, a gaunt face commanded by enormous, empty, bulging, malformed eyes. But for a moment I wondered if he was blind at all.

"John Palmer," he said. He was past sixty, I thought, per- haps closer to three score and ten. "Culp Hill," he suggested when I asked where he was from, a neighborhood that, with his name and the calm gaze of his enormous eyes seemed to tear something from my memory.

"Sir, I am not a beggar or a vagrant. That makes it hard for me to accurately represent one of the Apostles, if I understand you . . ." He continued on like that, his voice gentle and good- natured, but by that time I had stopped listening. His eyes shone like lenses and I peered down into them. Could it be?

I interrupted him. "You're Johnny Palmer," I cried. "You're the boy who saw the men in the moon."

He winced. But I ignored his stricken look as I continued. "You're the boy who saw the cities on Mars. My father saved the clippings. Your picture was in the newspapers."

Laboriously, insincerely, he smiled. "Not a boy, sir."

Someone had turned on the lights in the restaurant across the street. The blind man shrugged, opened his palms apolo- getically. "I believed it," I cried. "I believed every word. Oceans of quicksilver, colored creatures sliding back and forth across the horizon line. And then Percival Lowell and his Martian canali. We thought he had confirmed your observations."