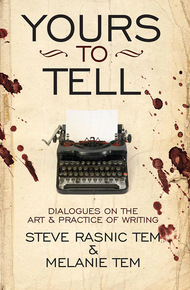 Steve Rasnic Tem and Melanie Tem have been writers, both solo and in collaboration, for over thirty-five years. Between them they have published over 600 short stories, 20 novels, 10 short story collections, and numerous articles, essays, poems, and plays. They are past winners of the World Fantasy Award, British Fantasy Award, and the Bram Stoker Award.

Yours to Tell by Steven Rasnic Tem and Melanie Tem

Steve Rasnic Tem and Melanie Tem go over everything from the mechanics of writing, how to find the time to write, to dealing with all the paper writers tend to collect. They discuss plot, point of view, setting, characterization, and more, all in an informal tone that invites you to become part of their conversation. Learn how to find your stories because they are Yours to Tell.

"In the summer of 2005, we were honored to be guest instructors at Jeanne Cavelos's Odyssey writers' workshop. Each morning we began with a short dialogue about some aspect of writing; we'd determined the topics ahead of time and some idea of points we wanted to cover, but for the most part the dialogues themselves were spontaneous.

The students seemed to like and learn from this format, and we found ourselves expanding on our ideas, saying things we hadn't put into words before, learning from each other after twenty-six years of many kinds of collaboration, learning from Jeanne and the Odyssey students.

Some suggested, 'You ought to write a book.'

Melanie was skeptical: Did the world really need another book about writing? Steve wondered how we'd find the time among our other projects, writing and otherwise. But in the years since that week in the New Hampshire Mountains the idea kept coming back to us. People who've read or heard some of the dialogues have encouraged us to put them together, expanded them, edit them, and… 'write a book.'

In 2010 we were invited to write for Storytellers Unplugged (Where Words and Imagination Meet), an on-line group blog consisting of monthly posts by each writer about subjects of interest to writers and readers. We realized we still had more to say about the process of writing—a lot more, actually—and so we continued our dialogues there. Talking about writing comes naturally to us because it's something we've done nearly every day of our life together. We're both writers—obsessively so—and when we're not talking about what has to be done around the house, or our kids and grandkids, or what's happening and might happen in the world, or who'll win 'American Idol,' we're probably talking about writing.

We've kept the dialogue format, working from the Unplugged essays and from audio transcripts of the Odyssey sessions, and from notes we made when we returned for a week at Odyssey in 2014. We've rearranged and edited, expanded and tightened. We've incorporated material from other things we've written or presented, and we've written brand new material. We've been surprised by some of our disagreements and by where we've come to similar conclusions."