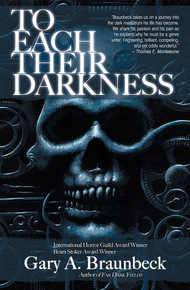 Gary A. Braunbeck is a prolific author who writes mysteries, thrillers, science fiction, fantasy, horror, and mainstream literature. He is the author of 19 books; his fiction has been translated into Japanese, French, Italian, Russian, and German. Nearly 200 of his short stories have appeared in various publications.

Gary's fiction has received several awards, including the Bram Stoker Award for Superior Achievement in in Short Fiction in 2003 for "Duty" and in 2005 for "We Now Pause for Station Identification"; his collection Destinations Unknown won a Stoker in 2006. His novella "Kiss of the Mudman" received the International Horror Guild Award for Long Fiction in 2005.

To Each Their Darkness by Gary A. Braunbeck

Explore the world of writing horror from a Bram Stoker and International Horror Guild award-winning author's point of view. Gary Braunbeck uses film, fiction, and life experience to elucidate the finer points of storytelling, both in and out of genre. This part-autobiographical, always analytical book looks at how stories develop and what makes them work—or not work—when they're told.

Be warned: reality is as brutal as fiction. Rob Zombie, police shootings, William Goldman, and human misery are all teachers to the horror neophyte, and Braunbeck uses their lessons to make To Each Their Darkness a whirlwind of horror and hope for the aspiring writer.

"Eight years ago I wrote a non-fiction book titled Fear in a Handful of Dust: Horror As a Way of Life. It was, at the time, the best I could make it. Upon its release it received a lot of very kind reviews and was later honored with a Bram Stoker Award nomination from the Horror Writers Association. Since then, it has gone out of print, the rights have reverted back to me, and if you want a copy you can easily find one at any number of online booksellers (used and otherwise—but be careful: some of them are charging outrageous amounts. Believe me when I tell you, do not pay more than the original cover price of $40.00. Never say I offered no help during these uncertain economic times.

I was not then, nor am I now, completely happy with the way Fear… turned out. It's not just the formatting mistakes and typos that were in that edition (though rest assured I did not do the Happy Dance about those), but I always felt as if the book had come this close to its goal and my intention, only to run out of steam in the home stretch. There are few worse feelings in a writer's professional career than to realize you've loosed a piece on the world that was either not yet ready to be written, or was ready to be written… just not by you, not as you were then, with your limited emotional inner vocabulary.

Don't misunderstand; I remain proud of Fear… and will happily sign it for those who have in the years since gone to the trouble to track down a copy because they've heard such good things about it. In many ways (which I briefly touched upon in the original edition) the writing of Fear… saved my sanity and my life. It reinvigorated my creative drive (which had been all but nonexistent) and my determination to live the rest of my life as well as I could and bring no further pain, anxiety, sadness, disappointment, fear, or the infliction of loneliness into the world than I already had—and believe me, I'd done more than my share of spreading around the misery as fairly as I could, especially in my younger days.

In the introduction to the first collection of Cedar Hill stories, Graveyard People, I wrote, with tongue firmly in cheek, the following words:

'What you now hold in your hands is the first collection… of my Cedar Hill stories [in] the order in which they appear in the Cedar Hill Cycle, an ongoing work that will see completion only when I die.'

Somehow I don't find that quite as funny now as I did then (more on that later).

It occurs to me that this explanation has taken on a far-too-somber quality far too soon, so instead of carrying on this borderline-melancholic tone, I'll take a breath and continue slouching toward the point."