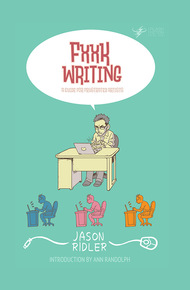 Jason S. Ridler is a writer, military historian and improv actor. He is the author of the Brimstone Files and Spar Batteries series, has published over 70 short stories, and teaches for Johns Hopkins University, Google, and other bastions of learning. He lives in Northern California.

FXXK WRITING: A GUIDE FOR FRUSTRATED ARTISTS, based on the eponymous column, is an unvarnished, honest yet hopeful guide to surviving the many minor and major cruelties and delusions that rule the lives of writers. It's goal? Telling the truth, refusing to be duped by false hope, lies and seductive daydreams, and get to the work of being both a good writer and an unflinching observer of the duplicities of publishing.

Admit to yourself that what you really want is legions of fans, billions of ebook sales, and gaggles of groupies who worship you more than Neil Gaiman, and then toss those dreams in the burn can. Later, when they creep back in, shove them back in the burn can. Every time. And they'll return and return, but they won't happen. You can't make them happen any more than Hitler could use his "Triumph of the Will" spell to turn the Battle of Stalingrad into a German victory. Worse, some studies have shown daydreaming about a goal stimulates the same release of pleasure chemicals as actually DOING what you're dreaming of, so you sap your strength from actually going out and making stuff. So, kill your porn dreams! Understood? Cool. Now, pornless, do you still want to write? If yes, carry on!