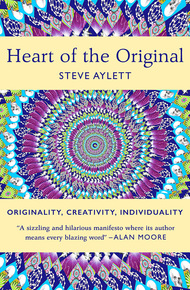 Steve Aylett is the author of Novahead, Slaughtermatic, LINT, Fain the Sorcerer, Atom, The Crime Studio, Bigot Hall, Rebel at the End of Time, Toxicology, The Inflatable Volunteer, Shamanspace, And Your Point Is?, The Complete Accomplice, and Smithereens. He was a finalist for the 1998 Philip K Dick Award (for Slaughtermatic)

Heart of the Original by Steve Aylett

"The truly new invents new guts for itself."

It's an old idea that if we got enough people spinning in their graves we could use it as a power source, a graveyard forming a turbine array. But since the spin-action depends on a preoccupation with other people's business and opinions, have you wondered how much energy you would produce?

Those who match nothing but themselves rarely notice the hairpin turns of external decree. They think in the rich syntax that results from living life in the wrong order. Fashion is a set of time's petty ordinances, local laws we submit to through inherited consent. In this environment truth is as loud as a photograph of a violin and originality both feared and slandered as legend. Nothing much interesting happens amid a conformity so innate it cannot clearly perceive or discuss itself.

Before the satirist Bierce threw his phone into the furnace he talked about 'our resolutely stalled evolution'. A great one for affable scorn, he was admired to within an inch of his life. Like Twain, he had noticed that giving the same argument while wearing different trousers gave the illusion of varied insight. Those who claim that there are no more first times refuse to state when the last-ever 'first time' occurred. When did it all end? Others hold up old ideas in new clobber and claim originality. Anything to avoid creating the real thing. Combined with the historic policy of ignoring the first instance of any particular idea until it has spread enough to be restated generally, these approaches minimise the uncomfortable notion that an idea can originate from an individual. It's less disturbing to have a spider climb into your mouth than to have one climb out.

True creativity, the making of a thing which has not been in the world previously, is originality by definition. It increases the options, not merely the products. But while many claim to crave originality, they feel an obscure revulsion when confronted with it. They have no receptor point to plug it into. Attempts to force it result in the sort of fire that burned Tesla's wonder-lab to the ground. Repetition of familiar forms is preferred. The hailing of old notions as original lowers the standard for invention and robs most creative people of the drive to do anything interesting, let alone seek out the universe of originality which is waiting, drumming its fingers and wondering why nobody calls.

Raw thought is more available to those not stuck to the temporal floor. Thousands of 'what if the Nazis won WW2' stories are hailed as innovative despite the first appearing in 1937. In the mid-thirties Katharine Burdekin knew the allies would win the upcoming war but wrote a thought-experiment about the alternative, Swastika Night, published the year Ayn Rand was busy plagiarizing Zamyatin's We. Randolph Bourne was one of the few journalists to suggest the First World War might not be such a bright idea and annoyed everyone by calling it 'the First World War'. It was supposed to be called the Great War or the War to End All Wars. Bourne was ignored because his opinion disturbed the narrative and because he was disabled. Another such figure was Simone Weil, the sort of goofy genius who'd fire all minds at a posh dinner and end up tucking the tablecloth into her pants and dragging everything to the floor.

But even those bold enough to accept the obvious have a preternaturally tenacious resolve not to venture beyond it. The absence of meaningful novelty doesn't help the boring catastrophe of modern times, congested with old deception. Let's blow our noses. Life is a moment to respond before we are repaid into the unknown. Find the strongest gravity, fold the world's edges into it and flip it inside-out like a dog's strange ear. Energy is merely the intermediary of oblivion's smithereens. Write every story as if it was your last, whether suicide note or proof of life.