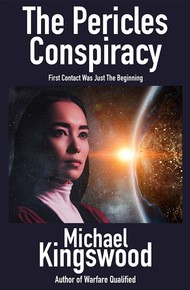 Michael Kingswood is 20-year veteran of the US Navy submarine force and a lifelong fan of science fiction and fantasy literature. His work has appeared in numerous collections and anthologies, to include the Fiction River Anthology series from WMG publishing. He holds a bachelors degree in Mechanical Engineering as well as a Master of Engineering Management and a Master of Business Administration. He has four children and currently resides in San Diego. Visit his website, https://michaelkingswood.com for the latest news on his work.

He has a weekly podcast, Story Time With Michael Kingswood, where he reads portions of his work. You can find the podcast at https://podcast.michaelkingswood.com or https://bitchute.com/michaelkingswood/

Sign up to receive email announcements of Michael's new releases and other exclusive deals for newsletter subscribers here: http://michaelkingswood.com/newsletter-signup/

The Pericles Conspiracy by Michael Kingswood

Captain Josephine Ishikawa changed the course of history, but no one knows about it.

She and her crew had an encounter while returning to Earth from the colony worlds, and upon their arrival the government swore them to secrecy about it.

With the powers that be in charge, Jo did her best to put the incident out of her mind and set about getting her starliner, Pericles, through a major overhaul and back out to the stars.

But the circumstances of their return to Earth along with the mysterious death of her Chief Engineer has caused the news media to ask questions, prompting Jo to wonder whatever became of the beings she rescued out in the depths of space, and of the promise she made to their dying parents.

If you like action and intrigue, The Pericles Conspiracy is sure to keep you on the edge of your seat, and leave you wanting more.

The Pericles Conspiracy - Chapter One - Scene One

A few patrons sat at tables along the wall opposite the bar and two more were at the bar itself: a plump middle-aged man in dirty work coveralls at the near corner and, at the far end, a slender woman with short-cut black hair dressed in dark business attire.

The bartender idly wiped down the taps halfway down the bar, and a lone waitress chatted with a patron at one of the tables.

Vidscreens behind the bar displayed the latest headlines and sports scores, but the volume was muted. A tune from the middle of the pop charts played over the bar's speakers, just loudly enough to make it difficult to hear a conversation from more than a few feet away.

He would have expected more business, considering it was hump day. Just two more days until the weekend after all. But he was just as happy for a sparse crowd. He hated having to search through a throng to find his mark.

As it was, a quick survey as he paused at the tavern's entrance revealed this evening's objective. He smiled slightly and walked to the far end of the bar.

He paused as he reached the chair around the corner of the bar from the slender woman. He cleared his throat, but the woman already noted his presence, favoring him with a slight frown and a quirked eyebrow.

"Is this seat taken?" he asked.

She shrugged and looked away, back to the closest vidscreen, where, from what he could tell from the closed-captioning, some talking head was pontificating about what effect the latest elections on Centauri would have on interstellar trade.

Her choice of programming made sense, considering her occupation.

As he sat down, he was struck by the woman's appearance. Ten year-long shifts as Captain on a starliner, plus the time to move up through the ranks to reach that station meant she had to be in her early to mid 50s at least. Still, he could have sworn she still had a few decades before she reached her middle years: she did not look a day over forty.

Her bio said she was the product of a marriage between a Japanese man and an English woman. In his experience, women from east Asia tended to age well, but even still he was impressed.

The bartender sauntered over.

He noticed the woman smirk ever so slightly before taking a sip of her drink as the bartender moved back to the taps. He figured she would prefer to drink something more exotic from one of the colony worlds, but unless he missed his guess, she was drinking a Seven and Seven.

Hardly the height of sophistication itself, and not exactly a perch from which to scoff at his beer.

"You ever study ancient history?"

She glanced back at him and rolled her eyes.

She sniffed and turned back to her newsvid.

A moment later the bartender returned with his beer. He accepted it with a smile of thanks and tapped the paypad on the bar. His database implant interfaced with the pay system and applied his standard tip rate automatically. The bartender looked surprised, then pleased, and voiced his thanks before moving away.

Tipping well was often useful for opening doors, he found.

He sipped at his beer for a few minutes, watching the newsvid with only the vaguest of interest. It was a moot discussion; whatever effects the election caused had already occurred more than four years ago. Folks on Earth were only now hearing about it, of course. But whatever changes they made in response would also be extremely time late in reaching Centauri ears.

So what was the point?

Glancing back at the woman, he noted that she too looked a bit amused at the discussion. Of course, she would know the futility of it more than most.

"So I was reading the other day about an ancient Athenian ruler. Guy named Pericles."

She stiffened slightly when he mentioned the name, but quickly recovered, sipping her drink again without bothering to look at him.

"Is that right?" She sounded annoyed.

"Very interesting man." He took another drink of his beer. "He took over while Athens was rebuilding from the Persian wars. He fostered the arts, built the Acropolis, endorsed Athenian expansionism. During his reign, Athens became the greatest political force in the region. But then, of course, he pressed too far. Made Sparta nervous. And so, the Peloponnesian War. He didn't live to see it, but eventually Athens fell beneath Sparta's military might."

"I heard a story about another Pericles recently."

She froze, her expression suddenly becoming wary. He continued on.

"Starliner by that name comes in from the Gliese system, just like normal. But there's nearly a week's delay in unloading the cargo. The crew is sequestered. Interviewed by government agents, they say. All but the fourth shift are out within a week. That shift's sequestered for more than a month. Six months later, Malcolm Ngubwe, the fourth shift's Engineer, dies under, shall we say, mysterious circumstances? Then that same shift's pilot, one Carlton Hersch, and his wife Alison, the shift's doctor, leave the starliner company for work planetside." He shrugged. "Not so unusual, except he was in line for promotion to Captain. Strange time for a career change, isn't it?"

"I don't know what you're talking about."

"Yes you do." He leaned toward her, noting her expression shifting from wariness to nervousness. "What happened out there to cause so much fuss, Captain Ishikawa?"

She swallowed, pulling away from him.

He tapped his thumb and forefinger and waited for a moment.

When nothing happened, he sniffed in annoyance. He figured she would have upgraded to the interactive database implant by now. She had been back long enough, and those implants made forgetting names a thing of the past.

He always kept old-style holocards, though, just in case.

Pulling one from his pocket, he slid it across the bar to her. His credentials were plainly visible: Jeremy Reynolds, Investigative Reporter, Star News.

She picked it up, her eyes narrowing as she read it. Then she stood, dropping the card onto the bar.

"I've got nothing to say to you, Mr. Reynolds."

She turned to leave, but stopped as Jeremy grabbed her arm gently.

"There are rumors of a new strain of disease onboard. The public has a right to know the truth, Captain."

She hesitated, then pulled away from his grasp.

With that, she walked away at a brisk pace. She was out the door quickly, and never looked back.

Jeremy remained in his chair for several minutes more, finishing his beer and shrugging off the bartender's quip about him striking out. There was definitely something there. And he intended to find out what it was.