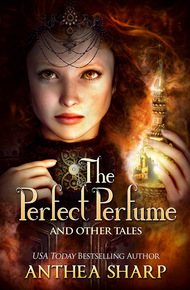 USA Today bestselling, award-winning author Anthea Sharp grew up on fairytales and computer games, and melded the two in her award-winning Feyland series. She makes her home in the Pacific Northwest, where the mystical forests provide inspiration for her newest series, The Darkwood Chronicles. Find out more at www.antheasharp.com

The Perfect Perfume and Other Tales by Anthea Sharp

The Victorian Era like you've never imagined it before! In this collection from USA Today bestselling author Anthea Sharp, take a thrilling airship ride, discover the secrets of clockwork, escape to a future in the stars, and much more... Featuring intrepid heroines, hidden magic, and wildly imaginative steampunk, this anthology of short stories is perfect for fans of enthralling alternate-history adventure. Includes: THE AIRSHIP ADVENTURES OF CAPTAIN JANE FURY – Dodging air pirates and storms, can the captain outrun the dreaded Sky Kraken and fulfill her vital mission to save the queen?

THE SPIDER'S SALON – Deep in the heart of Paris, the Spider spins her webs, and seeks a worthy successor. THE VISIT – Something horrific awaits a man as he takes a frightful carriage ride. POCKET FULL OF ASHES – A lowly pickpocket discovers she possesses the magic of fire at her fingertips. LADY ELIZABETH'S BETROTHAL BALL – One young woman defies the dictates of family and society to forge a new future for herself. THE WORTH OF RUBIES – A string of jewelry robberies among wealthy ladies leads to a surprising perpetrator. THE PERFECT PERFUME – An alchemist must craft an amazing new scent in order to save her family's business.

THE CLOCKWORK HARP – A haunted instrument sings a ballad of betrayal and murder.

A SPLENDID WEDDING – As her daughter's marriage celebrations go awry, a woman makes a fateful decision.

THE SUN NEVER SETS – What if aliens landed at Buckingham Palace in 1850? An alt-history origin of the Victoria Eternal universe.

PASSAGE OUT – Two street urchins yearn for the stars, but discover there are other ways to escape the Southampton slums.

VICTORIA ETERNAL – As the British Galactic Empire spans the Milky Way, history will be forever changed by a discovery on a small lunar outpost.

She had not meant for her concoction to explode.

Charlotte Barrington buried her nose in her sleeve and took a step back from the smoking vial on the laboratory table. A spark flew from the vial and singed a hole in her poplin skirt. Despite her goggles, her eyes burned. Damnation.

She was missing some essential component. None of the normal stabilizers were effective—and she certainly could not have her perfume exploding.

Perhaps it was the pinch of golden dust she had added, advertised as Genuine Powdered Unicorn Horn. The small cobalt jar had cost more than she could afford—but she was desperate to find the unique ingredient that would secure her commission as Parfumier to the Queen.

Several perfume makers were vying for that title, to be bestowed during Victoria II's upcoming Silver Jubilee celebration. It was Charlotte's last chance to preserve her parents' legacy, to prove that, despite all assertions to the contrary, she could carry on the name of Mlle Violetta, Parfumier Extraordinaire.

To do so she must take reckless chances.

Three days. That was all the time remaining until her appointment with the queen. Before then, Charlotte must discover the unique ingredient that would make her perfume not just a scent, but an event.

She had observed in the laboratory how some substances took on curious properties when viewed through restricted spectrums of light. Her goal was to formulate an elegantly refreshing perfume that, when combined with a dark glass filter, created a spectacular effect about the wearer. A silver glow, in honor of the queen's twenty-fifth year of reign.

It was an ambitious, some might say impossible, endeavor.

At first, Charlotte had tried incorporating traces of precious metals into her perfumes: silver, platinum, white gold. While some of them created a faint opalescence, none of them reacted under lights, no matter the spectrum applied.

None of those had been effective. But at least she had achieved a lovely explosion.