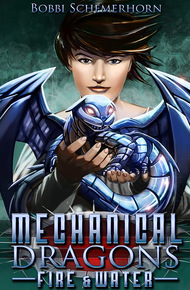 Bobbi Schemerhorn was born in Nova Scotia, but raised in Alberta. She has lived all across Canada, living in at least five different provinces, thanks to her military husband. Bobbi enjoys watching a variety of TV shows and movies; she is a Sims 2 playing fool, and loves working with her hands making crafts. Although she has no human children she does have one beautiful kitty who has reached her 19th year.

Bobbi has self-published all in the fantasy genre. She has dabbled in Steampunk and Greek Mythology as well as Urban and Epic. Outside of her own writing Bobbi takes pride in helping her fellow authors with their work with her content editing and beta reading. She is known for her tough love both in her professional and personal life.

Mixing magic and inexperience may result in dragons!

And now she has a dragon.

Khaly knew something was wrong when the dragon wasn't where she left it. She had no idea how it happened or that it was her fault. But now Khaly must run because the Guild was coming for her.

Power and domination is the Guild's desire...

...Elementals stand in their way.

The Guild is a true force of evil. Sweeping through Vlarlee they wipe out those with magical gifts, known as Elementals. No matter the age.

Who is the real threat?

Can Khaly figure it out before the Guild finds her?

Mechanical Dragons: Fire & Water is full of twists and turns you will never see coming!

"Man." Khaly leaned back on the door, staring at the two dragons. "What the hell am I going to do now?"

Sumora jumped off the bed, approaching Khaly with her low purr. She bent down and scooped her up, running her hand along the joint of the wing where it was attached to the body. She had placed the last piece of the exoskeleton the night before.

"I guess that's what helped you fly out of here today, huh?"

Khaly noticed she could no longer hear gears whirring inside the dragon. She held her out at arm's length. Sumora's feet and tail dangled unceremoniously, but she didn't stop purring. Khaly pulled her back in, lifting Sumora's chest to her ear. She couldn't hear anything aside from the purring.

"Stop purring for a minute, would ya?"

As if fully understanding, Sumora ceased making a sound.

Khaly listened intently to the dragon's chest, gawking as she pulled her away.

"I hear a heartbeat!" She was practically shouting.

The two stared at each other, Khaly with her mouth open and Sumora lazily gazing back. A deep, husky growl of sorts came from the bed, pulling Khaly's attention back to the fire dragon. It had no exoskeleton, just the frame that held the software's and hardware's inner workings. The gears spun and whirred within, the wires partially exposed. Sumora started to struggle, and Khaly realized she was still holding her at arm's length. Placing her on the floor she approached Orantheio.

"So much for my theory about the nanites. I never used any on you," she whispered to the dragon, kneeling down in front of it. "My father is looking for you." She rocked back on her heels. "How am I going to explain this?"

"Khaly?" Her mother's voice came through the door. "Khaly, dear. Your father and I would like to speak with you."

Her eyes became round as saucers. "Oh no." Frantic, she picked up the fire dragon. Startled, it spit out a small ball of fire. Khaly yelped in surprise, causing Sumora to jump onto the desk, hissing and increasing her size. The fire dragon struggled in Khaly's arms, and one of her fingers slipped inside the frame and caught the edge of a gear.

It spat out another ball of fire as Khaly dropped it onto the floor, scorching her carpet. Orantheio backed up under her desk, swishing his metal tail back and forth, clanking it against the wall and leg of the desk.

"Khaly? What's going on in there?" Her father's voice came through the door and the knob began to turn.

"Nothing. I just dropped something. I'm not dressed!" She gave a silent plea to Sumora as she opened the closet door.

Sumora visibly sighed and jumped off the desk, landing gently on the floor without a sound.

"Take your friend," she whispered.

Sumora looked up at Khaly with glassy blue eyes then back to Orantheio, who was crouched under the desk. She let out several clicks, as if impatiently calling it over.

It looked to Khaly then to Sumora, slowly skulking out from under the desk, skirting the bed and side table, and getting around Khaly to follow Sumora into the closet, all the while never lifting itself off the ground more than a few centimeters.

Khaly couldn't tell if he was angry or scared. With no exoskeleton, it didn't have the same facial features and expressions as Sumora.

Once in the closet, Khaly pointed a finger at Sumora. "Be good. Keep quiet." She closed the closet door and hurried to open her door for her parents.