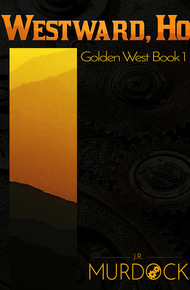 J.R. Murdock is the author of V&A Shipping, the Giant Robot Planetary Competition, Supernatural Learning, as well as Billy Barbarian, Golden West, and many more. He grew up in backwoods of Minnesota, spent a few years living in Colorado, lived on both coasts while in the Navy, and now resides in San Diego with his lovely wife, favorite daughter and their dogs. He writes as often as possible and usually with reckless abandon.

Abigail's life is disrupted when her father announces they'll be moving across the country from New York to California. His new job requires them to move their lives across 1885 America where the transcontinental railroad has yet to be completed. Instead of building locomotives, he'll be building a new machine to mine for gold. On the way, their path is disrupted several times. A ghost of a man that worked with her father keeps appearing and disappearing, telling her that she must stop her father from going to California. It's not gold they're looking for, but he can tell her no more. Abigail is convinced this person is responsible for all their troubles. After purchasing a vehicle for their travel and befriending a giant in the mid-west, the trip becomes far more difficult. Now they must fend for themselves in the wild American West to complete their trip to. It's California or bust.

As if by some miracle, Abigail's father and his company went back down the spiral staircase and into their room.

The giant struggled to heft himself up. "I don't think I can. I must go back down."

"No, you're so close. Hold on." Abigail lifted herself up and over the edge, hoping that free of her weight, the giant would be able to pull himself up.

Once again, the giant struggled to pull himself up onto the roof. His arms shook, but he didn't look like he was fighting fatigue. If anything, the shaking looked like fear.

He looked down and his hand slipped. Abigail reached for him, but the hand swung back up and grabbed on once more.

"Just plant your feet in the window sill right there. Don't look down. I said don't look down. Right here. Look at me. There you go, now just push with your leg and pull with your arms. You can do this. You're almost there. Quietly, you don't want to disturb my father or he'll come back up here."

It took a lot of coaxing, but finally, the giant lay on the roof, puffing and panting, covered in sweat.

"I didn't think I was going to make it. Thank you."

"Just rest for a moment. I'm going to sneak into the room and see if I can find some water. I think there is a pitcher of water somewhere in the room. Don't go anywhere."

"I dare not." The giant put his hand on his chest.

She started for the stairs and stopped and looked back. "What's your name?"

"Mr. Gomun, I am Abigail Champski. It's a pleasure to make your acquaintance. I'll be right back with that water."

Atham closed his eyes and took a long, deep breath. He didn't look tired; he looked exhausted. Abigail wondered just how long the giant had been on top of the train riding in the wind. Beyond that, how long had the giant been on the run? Surely, it'd been more than just today after getting off the train. No wonder he had difficulty holding onto the side of the hotel. She had asked too much of him, making him climb up the side.

She stood at the top of the stairs listening for several moments. Her father and the engineer were at the door saying their good nights. Quickly she slipped down the stairs hoping to avoid being seen. The last thing she needed at the moment was for her father to suddenly want to have a conversation. As much as she just wanted to spend time with him and talk, she knew that meant a delay getting water up to Atham.

With his back to the door, her father talked to the engineer in the hallway. Abigail took the chance to avoid being seen and darted for the corner of the room where she'd seen a pitcher of water. She stopped in front of it and could tell immediately that it would be far too small. Atham could probably drink a bathtub full of water. And what about food? Had the poor man eaten at all that day? She grabbed the pitcher and headed back to the stairs. As she set one foot on the stairs she noticed that the room felt too quiet.

"Abigail? Honey? What are you doing here? I didn't see you come in."

She had to think of something to tell him. She couldn't just stand there with the pitcher. "Oh, hello. I came in while you...the engineer were upstairs."

"Oh, I didn't hear you when you came back to the room. I'm so happy you're here. Talking with the engineer has really gotten my creative juices flowing. I wanted to run a couple of ideas past you. With those little things you've created, perhaps you can lend your insight to something bigger."

Now? Suddenly now he wanted her help? What was she supposed to do about the giant she'd brought up to the roof of the hotel? Of course, her father wasn't thinking about that. All he could be thinking at the moment was spending some time with his daughter. She needed an excuse.

"Could we do some planning in the morning? I'm really quite tired. I was hoping to just get to bed and perhaps we could get an early start?"

His smile faded slightly but returned and his eyes lit up. "That sounds wonderful. We'll have breakfast. Just me and you. Then we can get to work. I'm sorry I've been so distant lately. You know how I get with a new project."

He took a step toward her and reached out to give her a hug. He stopped and looked down at the pitcher in her hands.

Abigail smiled. "I was just going to go upstairs and water the plants. They looked like they could use a little water."

"Strange. I had just been up there and I didn't notice any plants. Well, either way, you're tired. Why don't you give me that and I'll..."

"No!" Why had she snapped at him? Now he would get suspicious. "You've been up there for so long. Let me get some fresh air and water the plants. I'll be right back down."

"Why don't I come up there with you?"

"Dad, really? I'm a big girl. I think I can water a couple of plants. We'll have all day tomorrow to spend time together. Why don't you get ready for bed? It'll be nice that we each have our own bed for a change. I think that once we get to California we should each have our own rooms like this. I'm so tired of sleeping on the floor."

Again, he smiled. "You're quite right. It was a long trip." He took a moment to yawn. "I'm more tired than I thought. We'll be up before the sun and working before you know it."

Standing on the first step up to the roof, she leaned down and kissed him on the forehead. "Good night father. I'll be down in just a couple minutes."

He patted her on the side and looked to the wash basin. "I'm sorry, could I trouble you for a little bit of that water? I'm sure the plants can't be that thirsty."

She chuckled and handed him the pitcher. He poured far too much of the water out. She feared he might use all of it, but he did stop before pouring it all out. He handed it back to her with a smile.

"Go water the plants. I'll most likely be asleep by the time you come back down so take your time. Just remember, we have an early and busy day ahead of us. I still need to secure transportation from here to California."

"I'll be quick." She turned and hurried up the stairs, the water in the pitcher sloshing.

Atham sat cross-legged with his hands behind his head and looking up into the sky. He took loud, deep breaths that she was surprised she didn't hear coming up the stairs. Even sitting as he was, Atham was still taller than Abigail.

"I brought you some water."

Without looking at her, he held his hand out. The pitcher looked so tiny in his hand and he drank the water in one swallow. She thought about going back downstairs and fetching the water her father had used, but that seemed gross.

He shook his head; his brown, scraggly hair brushed his shoulders as he did. Now that she had a moment to actually look at him, he looked haggard. Underfed, dehydrated, just plain worn down like one of her father's pencils after too much drawing.

"Are you hungry? I could get some food delivered to the room and bring it to you."

"You've done enough." He held out the five-dollar bill.

"It's been my pleasure to help you. I couldn't possibly take money from you. Please, put that away."

"We had a deal. You help me, I pay for your assistance. It's the least I could do."

She wanted to argue with him, but his eyes said he wasn't going to argue the point any further and to not take the money would insult him. Even though she had no need of Atham's money, she took the bill and placed it in her sash. Her fingers brushed the tiny disk Mr. Limón had given her.

"Will you be comfortable up here?" Abigail looked around the roof and did see one decrepit looking plant that she could claim she had watered.

"I shall be fine and I'll be gone come first light. I just needed a night to gain my bearings. That is all. After tonight, I shall trouble you no further, Ms. Champski."

It took all her will to keep from blushing, even if she knew in the dim starlight the giant most likely wouldn't notice.

The stars looked beautiful from the country. It reminded her of being upstate where her mother had been buried. She almost said something to Atham about her but decided better of it. He'd be gone in the morning and somehow she felt it better if they remained strangers. If their paths crossed again another day then perhaps she'd talk to him about something so personal. He also looked on the verge of saying something as they just stared at each other, waiting for the other to talk first. Instead, a voice came from the stairs.

"Abigail? What is this? How could you?"

Standing next to her father were two men. The first was the fat, greasy manager of the hotel; his face a twist of fear and revulsion. The other person, dressed in blue with a baton in one hand and a pistol in the other, was a police officer.

"Now if everyone will just remain calm, we can take care of this business."

Atham stood and jumped off the edge of the building in one smooth motion. The officer fired.