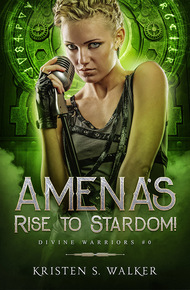 Fantasy author Kristen S. Walker wants to grow up to be a pirate mermaid with the ability to talk to sharks, but until then she writes fantasy stories for teens and adults. She lives in Northern California with her family and two rescue pets. Besides books, she loves to play video games, collect dolls, and spend time at the beach.

Fifteen-year-old Amena is a spy and thief for the rebellion, but she dreams of being a singer. Fame seems impossible when she lives in a hidden village in a remote part of the empire. But when she gets arrested on an easy recon mission, a magical doorway appears and offers her a way out.

When the goddess of the rainforest offers Amena a chance at her dreams, she chooses to risk it all. Leaving behind the rebellion, her mother, and everything she's ever known, she can finally start her singing career. But the goddess's magic comes with hidden costs.

Joining the big competition, Star Search, Amena tries to balance her music with training as a divine warrior. She must serve the whims of the goddess and avoid her criminal record. A rival singer takes her breath away—but she's hiding her own secrets. Her new life is more dangerous than the spy game she left behind. Is the price of fame too high when death is on the line?

Shortly after midnight, I'm kneeling in the darkness while I pick the lock on an imperial warehouse door. No one's around, so I sing softly to myself as I work. Some people think you need to listen when you pick a lock, but it's more like something you do by feel. I've been picking locks tougher than this since I was old enough to reach them. I rake the pins inside the lock with my tools and feel each one snap into place, and before long, the lock pops open.

It's even darker inside, but it's just a big, open space. I know from last year that the door to the overseer's office is up the stairs along the east wall. I brush my fingers along the wall until I find the railing and I follow that up the stairs.

The office door has a simple lock. I slip the blade of my dagger in and jiggle a little, and the door clicks open.

Now I need to see. I strike a match with one hand and cup my other hand around it to keep from burning anything. All the file cabinets are along the wall. Looks like the overseer reorganized his paperwork a little, but he still labels everything. I find the drawer labeled "Schedules" and flip through the folders until I reach the most recent one.

The overhead lamp switches on, blinding me. I whirl around and squint against the brightness.

"Hands where I can see them," a deep woman's voice commands me.

I blink and the colors of a guard's uniform come into focus, followed by the barrel of a revolver pointed straight at me. Oh, great. So much for having Deryt on lookout. I raise my hands, the lit match still in one hand and the delivery schedule in the other.

The guard keeps the gun pointed at me and beckons me forward with her other hand. "Come here into the light where I can see you better. You're just a kid, aren't you? What are you doing in the overseer's files there?"

I try to look small and helpless. I'm short, so people often think I'm younger than I am. "Please, ma'am, I'm so hungry," I say in a pleading tone. "Just looking for something to eat. Isn't this warehouse supposed to have food?"

The guard lowers her gun just a little and walks up to me, snatching the file out of my hand. "That's not exactly food." She glances at the schedule and tosses it onto the desk. "You're just here to find out when your friends should hit this place. Yeah, I got suspicious when our food kept getting stolen every year right before the biggest shipment goes out. Looks like I just found the information leak. Turn around and put your hands behind your head."

I start to protest about the lit match in my hand, but it's already burnt out. I sigh and turn around like she says. If I can't get her sympathy, I might as well cooperate until I see my opening.

She puts the handcuffs on me, not as rough as the last guard who arrested me, and searches through the pockets on my trousers. She doesn't find everything, but she pulls out two of my daggers, the lock pick set, magnifying goggles, and the box of matches—enough tools to look pretty incriminating. "Pretty professional set of gear for a kid," she says. "How old are you, anyway?"

"F-fourteen?" I stammer out, hoping she'll believe a small lie. Criminal sentences get way harsher when you're fifteen and legally a young adult.

The guard spins me around and looks me in the eye. "Short for fourteen," she says, but her face doesn't show if she believes me or not. "Skinny, too, so maybe you're a little malnourished. I'll get a hot meal for you when we go down to the station. Any of your friends around that I should know about?"

I shake my head. When one of us gets nabbed, our partner's supposed to run for it. If Deryt is still out there.

The guard nods. "Well, I know you don't steal the food on your own. If you give up your fellow thieves, you'll get a lighter sentence, but we can discuss that down at the station." She takes me by the arm and leads me out of the office.

The guard turns on the rest of the lights in the warehouse and sticks close by me, so I don't have the opportunity to get away just yet. She's gentle but firm in the way she handles me. Probably believes I'm a local kid being used by a gang of thieves and she's rescuing me. Lots of mainlanders get desperate and turn to petty crime, and I don't have anything on me that could out me as a rebel.

As we walk outside, I look around to see if she's got backup, but she seems to be on her own, too. Good. I stumble over a rough patch of ground and sway off-balance. "Sorry," I mumble. "Light-headed. I really am hungry, ma'am."

The guard steadies me. "Easy there, girl. Not much farther til we reach my wagon."

Riding in the back of a security guard's wagon, no doubt trussed up so I can't escape, sounds like an uncomfortable way to travel. But it won't matter. I used that stumble as a cover to slip my spare set of lock picks out of my wrist brace into my hand. I'm already opening the handcuffs. In a few seconds, I'll be free.

The guard catches sight of the movement and yanks me to a stop. "Hey, what're you doing there? Give me that!"

She tries to take my lock picks, but I just reached the catch inside the lock and the handcuffs spring open. I kick her in the shin with my steel-toed boot and she yelps in pain, loosening her grip on my arm just enough for me to pull away. I take off running. If I can just lose her in the darkness, I'll be gone.

"Stop, thief!" the guard shouts. But instead of running after me, she runs back into the warehouse. Moments later, alarm bells ring out.

Oh, no. The warehouse district lights up and more security guards pour out of nearby buildings. Why are there so many of them on duty when there's nothing worth stealing right now?

I weave under a row of scaffolding for cover, but there're spotlights sweeping over every corner and I see the glint of guns being drawn. Of course the overseer's office had to be in the middle of everything. So it's a long way out of here, and the guards are closing in. I need to think fast or I'm done for.

I dodge one man's reaching arm and look around for an opening. I can see locks on most of the doors and guards coming out of the others. All I need is one doorway.

I've never been much of a believer, but a prayer comes to my lips. "Saints and gods, please, get me a way out of here!" I whisper under my breath.

And just like that, I turn and see a doorway I hadn't noticed before. It's on the side of a warehouse but it looks different, with a wooden frame instead of industrial steel, and kind of… Shimmery? It's dark inside, so I can't see where it goes, but it's gotta be better than running out here in the open.

"Halt or I'll shoot!" a guard calls out behind me.

I don't give it a second thought. I dive through the doorway.