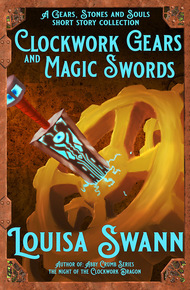 From the wilds of the California Gold Rush to the turbulent streets of San Francisco come the stories of gadgets and magic that permeate the Gears, Stones and Souls universe. Read along as Myrtle Creek attempts to live with voices in his head and Verbena Crumb deals with the "locals." Travel with Connor O'Malley as he strives to right society's wrongs.

Find out how to gain good fortune while in the middle of turbulent seas.

And remember—there are always rules!

Whether taking revenge or learning something new, the GSS characters find themselves faced with quirky challenges and intriguing adventures.

VERBENA CRUMB, DEADLY SORCERESS and powerful necromancer, drew in a breath of air that scarce qualified as air and glared down at the lake that dared shimmer in the early morning sun.

As far as Verbena was concerned, shimmering was a state best left 'til later in the day, after night-loving sorceresses had properly processed the beginning of the sun's new cycle. As for the thin air—whatever god had determined that air should be thinner as one climbed had as much sense as the mule beneath her. Climbing was a form of exertion and common logic dictated that the more one exerted oneself, the more air one needed.

If she had been present during the making of this world, Verbena would have assured the air was distributed properly.

Or heads would have rolled.

"Is them the ones yer seekin'?"

Verbena turned her glare on the man who had spoken. Though she had grown accustomed to the stench of death and decay through the years—raising the dead tended to dull one's sensitivity to foul odors—Carson Reid, the bootless twit, made her nose wrinkle in disgust.

For the better part of three days and most of the previous night they had been winding their way along trails barely wide enough for the mules, scrambling over boulders, winding around bushes and trees, struggling up inclines and down abrupt slopes. The lake had remained hidden for what seemed an eternity, surrounded by towering firs and pines as thick as cows were long.

They had spied the enormous lake surrounded by snow-blanketed mountains just as dawn lightened the skies, though the trail maintained a good distance from the water's edge, winding through a seemingly endless supply of oversized trees.

After another rather arduous scramble over rocks and boulders, they'd found themselves on a promontory with the entire lake at their feet—or hooves, if one expected the mules might be impressed.

Verbena studied the vista with a critical eye.

Mer de l'Ouest, the "Sea of the West." Or so some had called it. Though the name was highly inaccurate.

She released the buttons on her canvas overcoat, letting the cool air brush her neck, and thought about a map she had once seen. It had depicted an enormous body of water that began, or so the man with the map had claimed, in this location, spreading both north and east. Others claimed the Sea was further east; some said further north. East or north, one thing was crystal clear—

This wasn't the Sea of the West. It wasn't a sea at all.

No matter its size, the lake was too clear, too pure, to qualify as a "sea." The surface was impossibly calm, reflecting both mountains and surreal blue sky as precisely as mirrored glass . . .

Verbena squinted at the calm surface and frowned at an object about a ship's length from shore. What was that?

If the object had been closer to shore, she would have discounted it as a rock, but a rock would have to be enormous to show that far out. It would likely be a darker color as well, not the color of dead flesh.

"Let's take a look, shall we?" She flicked her left wrist, triggering the vessel on her bracelet to release a short stream of a water-like substance into her palm. The liquid pooled like quicksilver while maintaining the transparency of water.

Verbena was constantly amazed at how well magic could be melded with science. She had spent most of her life devoted to the practice of necromancy. Since her mentor had succumbed to the torments of time, however, she had discovered that specialization limited her. Although her mentor's voice still haunted her on occasion, insisting she focus only on necromancy, if she wanted to become the most powerful sorceress in the world, she needed to learn to control everything.

Wind had been fairly easy to bend to her will. Water, not so much. She'd spent the last year learning various spells and refining her technique, but water continued to prove troublesome. So, she'd had her gadgeteer—a young man eager to put his talents to good use—create a device to aid in her endeavors. It had taken several attempts—the first bracelet leaked so badly it had ruined her favorite gown.

Verbena had been proud of the way she restrained her impulse to burn the gadgeteer to a crisp that day. He'd promised to do better.

It had taken a day to get used to the sensation of having something that snug about her wrist, but the adjustment period had been worth the aggravation. She had infused the water contained in the tube with properties that gave it more viscosity.

And now all she needed to do was command it.