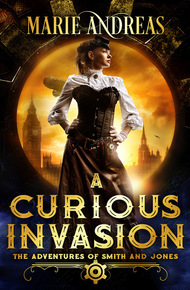 A Curious Invasion by Marie Andreas

In an Alternative Victorian London, England has a new queen—she just happens to be undead.

Dr. Nettie Jones is a new agent for The Society for the Exploration of the Unexplainable, a secret organization protecting England from unnamed sources. Being half-vampire is an added complication.

The Society doesn't yet appreciate Nettie but fate steps in when invaders from a dying planet begin following her the same day Queen Victoria chooses to be turned into a vampire.

Nettie and her fellow Society agents must pull together to thwart the alien invaders, fight off the vampire infestation, and rescue the Queen from becoming the longest ruling undead monarch, even if that rescue is against her will.

The bells of Westminster sang out dolefully as Nettie Jones scurried from the morgue. Heavy drops of rain slammed against the glass casing of the nearby gas lamps. Gaston had called it down to the exact minute. At five minutes after midnight, January 5, 1848, Queen Victoria died at the hands of her own physicians, only to be brought back by the miracle of modern science.

Brought back by vampiric science, really.

The physicians surrounding the queen would steadfastly deny it, but Nettie wondered how many vampires had been drained this night to give England an immortal ruler.

Shivering with a cold not born of the midnight air, she walked faster. Rarely did she stay this late at work anymore; however, a pleasure dirigible had collided with an armored war zeppelin late in the afternoon. All told, thirty-five people had died that night. It had taken quite a while to document them all.

Nettie clutched her umbrella tighter and walked forlornly past the shuttered garage door. Gaston had made her promise she would never ride Lula Belle in the rain. She was a fine steamcycle, his newest invention, but he couldn't seem to make her navigate consistently in the rain. Of course, living in London, this deterrent meant Nettie was extremely limited in the days she could drive her.

Lost in her thoughts as she was, Nettie failed to notice the man until he grabbed her immediately outside her residence. He had one hand over her mouth, the other about her waist before she could turn or scream.

Her attacker was taller than her, an uncommon, and unwelcome, occurrence. He pulled her backward, briefly yanking her off her feet. She went limp, which forced him to stumble as her full weight suddenly fell upon him. With his misstep, she ripped his hand away from her mouth, forcing his arm upward until she heard a disturbingly satisfactory bone snap. Maybe even two; it was difficult to tell with the blood pounding in her ears. Slightly longer than average canines dropped into place inside her mouth. She spun out of his other arm, breaking it as well. The force of her movement, and probably shock, dropped him to the ground.

The man was clothed all in black, but the weave of his clothes was poor and ill-matched. With a snarl, Nettie moved into the flickering gaslight so he could see her teeth.

Already screaming in pain from his newly broken limbs, his tone changed to terror as he scrambled to his feet and fled.

Waiting a few moments to make sure none of her self-absorbed neighbors were going to come out and break tradition by questioning the screams, Nettie straightened her heavy dark blue dress and her favorite matching hat, picked up her reticule and umbrella, and made her way inside the boarding house.

She didn't need much light to see clearly; along with her above average strength, Nettie's unique condition granted her above average night vision. Her recent incident gave her enough pause to turn on all the lights in the sitting room. The somber and staid condition of the sitting room usually depressed her, but tonight it was comforting. The individual who had attacked her had more than met his match, but what if she had not been who and what she was? What poor woman might be lying ravaged and abandoned in the street somewhere?

Her hand tightened on the umbrella without her notice at the thought. She did notice when it popped and the frail metal pieces bit into her hand.

Drat, another one. Gaston often joked that she should buy umbrellas at a bulk discount with the way she went through them. Alas, they were frail, and she most certainly was not. Keeping the pieces together, she went into the kitchen and put them into the refuse box. The boarding house mistress, Mrs. Cruddle, would chastise her in the morning that was a certainty. Nevertheless, it was not her landlady's money that was funding Nettie's one-woman umbrella destruction campaign.