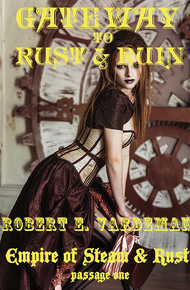 GATEWAY TO RUST AND RUIN is the inaugural passage set in the steampunk world of EMPIRES OF STEAM AND RUST, a shared world project. The world of 1915 is far different from that in our timeline, but some things remain the same. Undercurrents of greed and struggle for power burst forth in violent ways, in the air battles with zeppelins and espionage on the ground . Sir Francis Barstow has unlimited funds from the alchemist's dream—he can transmute lead into gold with a special ray confined to a Cornish coal mine. To exhaust generated fumes from the electrical equipment, he uses a strange black portal only a foot in diameter—the portal opens into an entire new dimension, the World of Rust.

Other, larger holes have appeared across the world. The Kaiser uses one to smuggle contraband from the United States into Switzerland in preparation for launching a great war, but he is opposed by a brilliant scientist unwilling to thrust the world into such devastation. To achieve his ends, the scientist explores the Rust World to scavenge technology unavailable anywhere else.

Sir Francis along with his pneumatically powered robot dog Fulton, with the lovely French aviatrix Nicole Larouse, find themselves in conflict with the Kaiser, his subjects and those who would use the strange black portals into a different world for their own vile purposes.

The battle begins, for domination of a ruined world and a 1915 steampunk empire.

He glanced up at the speaking tube. The lookout positioned at the rear of the main gondola had spotted Americans trying to overtake them. With such a load, the Eisen Adler had difficulty outflying a ruptured duck.

"Type?" he called into the speaking tube.

Such contempt would have been his, also, if they had their usual battery of weapons. Not now. They had been stripped down to carry more contraband.

"We have been spotted by their border patrol," he said to those on deck. Ordinarily he would have enjoyed a skirmish like that in the offing. Boasting of it to his little Gisele made her proud of her papa. And Freddy, no longer little Friedrich, so soon to enter the Imperial Air Academy, would have tales to impress his squadron mates. Marta would have clucked her tongue and chided him for filling their children's heads with such dangerous talk, but he knew she had taken pride in his exploits. Hadn't she kissed the Iron Cross he had won at Rotterdam after the Kaiser himself had pinned it to his chest?

He touched the spot where the medal had been bestowed. Only Luftwaffe insignia marked that spot now, but in the pocket under his tunic rode a picture of his lovely wife. His fingers pressed down on it as if she would respond with a smile and another kiss, then lightly caressed before turning back to completing his mission.

Rodet stared hard at the chart and pressed his finger down on a faint line of pencilled dots. It was a shame his Marta had died from the French influenza. Even she, a pacifist at heart, would be proud of him when he received the new medals from the Kaiser for this mission.

"Left engines reverse," he ordered. The zeppelin's superstructure groaned under the strain of making a complete reversal in course. "Lookout, what do you see?"

Rodet watched the compass as the mighty airship turned.

"There, Kapitän, I see both American ships. Do I man the guns?"

"Stay at your station," Rodet snapped. "We are toothless and cannot fight, even those two worthless gas bags lofted by the Americans. You must look for the hole, as instructed."

"How can I see a hole in empty air?" complained the lookout.

"He has a point, Herr Kapitän," Bergen said in a low voice. "This makes no sense. We should prepare to repel the blimps and then escape into Canada." He glanced at the chart where Rodet's index finger still pressed down so hard that it bent slightly into a gnarled arch.

"We do not go to Canada. They would turn us over to the Americans as smugglers or perhaps spies."

"Was there only for us to find . . . it." Rodet wasn't sure he believed everything he had been told in the briefing, but Luftkommandant Talmann had been adamant about the information. Rodet would follow Talmann to the gates of hell. Still, the weasel of an intelligence officer's smile had been one of satisfaction, as if he avenged some loss caused by the Luftwaffe. Rodet would have felt better if the Luftkommandant had personally given him the chart with the barely discernible pencil dots on it.

Rodet had doubted such a thing could exist, but Talmann claimed to have proof. Several peculiar portals had been found and explored. From the far side, the sky had appeared open, the beacon visible. Turning the zeppelin to face the thin air they had just traversed showed not the pursuing blimps but . . . nothing.

Rodet pushed aside the lookout and peered through the binoculars. As the Eisen Adler came about, he saw that the Luftkommandant had not lied. The running lights on the pursuing American blimps simply vanished. By careful study, he saw the occluding circular hole in thin air. It had not been visible as they followed the beacon and had passed through the spot where it hung like a siege balloon without tethers, but now that he could look back along their course, he saw . . . nothing.

"All stop!" he bellowed. Bergen passed along the command and the mighty engines ceased hammering at the cold atmosphere above the lake. The zeppelin drifted slightly off the proper heading, taking them out of position for entry into—through—the hole in midair.

"What is it, Kapitän?" Bergen's eyes were wide as he lowered his own binoculars and turned to his commander.

"I wish we could be sure," Rodet said in a low voice. "Runnels, it is time for you to man the machine gun."

"Jawohl," the lookout said, snapping to attention and saluting, before diving down a trapdoor into the forward turret.

From the turret just below the command deck and at the front of the Eisen Adler came the sounds of the Maschinengewehr being loaded with its pitifully small 7.92mm rounds. A metallic click sounded as the cocking lever came back and then a short stutter as invisible rounds tore into the black hole.

The command was relayed to the gunner. Rodet watched the eye-searing magnesium rounds vanish into the blackness, swallowed completely in a hidden giant's maw.

"We are to fly there?" Bergen asked.

"We will. For honor and duty, we will!" Rodet sucked in his breath and then released it slowly, ready to give the order.

"We're hit! The blimps have opened fire, and they hit the port side lateral bag! We're leaking gas!"

Rodet scowled and crammed a rubber stopper into the speaking tube blaring such unwanted reports. He could not be distracted now and did not want any of the command deck personnel to be, either.

A hydrogen leak wasn't fatal. What might be were the unseen attacking blimps if they continued such accurate—or lucky—fire. They were hidden by the hole that obliterated all light. The blimps could see the zeppelin from the far side and fire at them, but Rodet could not see his attackers. Worse, the rounds from his tiny gun arched rounds into emptiness, not a solid target. Like an American patrol blimp.

He heard Bergen gasp, then relay the orders to the pilot and engine room. The mighty props began turning, slowly at first, then with more power to drive the zeppelin ahead. To the attacking blimps it must seem that the Eisen Adler sailed directly into their guns. Despair filled the zeppelin's captain as the ship centered on the black hole and then slid forward.

What did it look like to the blimps? He couldn't say since the nose of the zeppelin suddenly looked as if it had been cut off. Then the zeppelin slid into the void within a void and blackness cloaked him and the control deck. He shivered although he felt no chill. The banked lights in his zeppelin never flickered, but their light failed to escape even a few inches. Rodet pulled away the baffle from a lamp overhead. The light cast a warm yellow glow on everything inside. Beyond the glass windows of the gondola, the light simply vanished.

"Full speed ahead, Leutnant. Maintain this heading. Do not veer from it one degree. On your life, not a half degree! We have been given orders by the Imperial Command and assured we will bring glory to the Fatherland with our heroics this day!"

Rodet wished he believed that. He pressed the eyepieces hard into his face and stared ahead. Nothing. From the sides of encroaching blackness he saw fleeting movement, indistinct and distant. Then he cried out in joy as a spot of light appeared ahead.

"We're coming through the other side! The Alps. Those are the Alps in daylight!"

Rodet's triumph died as the Eisen Adler was cut in half. Robbed of its lift from the prodigious bags of hydrogen, the airship gondola angled downward, gathered speed and smashed into the ground. Rodet died with a curse on his lips for Talmann, the Imperial High Command and even Kaiser Wilhelm but his final thoughts were of his children and that he would join his dear Marta too soon.