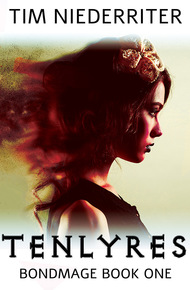 Tim Niederriter is an author of science fiction and fantasy. He grew up reading, and his favorite book as a child featured a certain famous furry-footed burglar by the name of Bilbo Baggins.

Though he enjoys cards a little too much, given his luck, Tim is also a podcaster and poet when the mood takes him. He hosts Alive After Reading, and co-hosts Of Mooks and Monsters. You can contact find him at timneedawriter.com or contact him at [email protected] if you want to hear more of his life story or other such nonsense.

Ilsa rides out with the mind eater mage called Blue as her partner, but she'll need more than one ally to succeed in her mission. The true threat to the land is greater than the warring nations. Ilsa's father, an infamous mercenary, has plans for all the strife. On a collision course with forces beyond her understanding, Ilsa's dream of a peaceful world may be lost forever along with the lives of all humanity.

Tenlyres is a stand-alone fantasy novel and the introduction to the Bondmage series. Fans of Brandon Sanderson and Brian McClellan will love this epic fantasy with a gunpowder twist, deep magic systems, and the struggle of good and evil playing out in a fascinating world.

Ilsa held her breath and watched him reach up and take a tablet from a saddlebag that hung down his strider's white flank. He knelt down beside the pile and extended the connector pin from the tablet. He turned to look over his shoulder. Ilsa darted back behind the tree. She took the pistol she held in both hands and double-checked the safety. It was still locked. She thumbed it off but kept her finger off the trigger.

He might be quick to draw, but judging by his movements earlier, she was faster.

She stepped out from behind the tree trunk, barrel of the pistol down. "Ferdinand Thoss." She walked forward with careful, deliberate steps. "What are you doing?"

Ferdinand looked up from his tablet with a start. He turned toward Ilsa with a grimace on his face. "I'm checking up on Lord Palend. Looks like he's been busy networking."

"Yes, quite a bit of networking." Ferdinand's eyes moved to the gun in Ilsa's grip. "I think you may interested in this."

Ilsa scowled. "So you've hacked into his connection logs?"

"It's not difficult to do if you know where to look." Ferdinand bowed his head. "Ilsa, you may want to hear this."

"Alright." She took another step toward him. "What's interesting?"

"Lord Palend contacted an animal pile on the plains west of here this morning. Turns out, that plant pile is registered to some Ayochian General called Boraij Kanan."

"General Kanan." Ilsa remembered the heavyset angry man in the Red Lector's command tent the night before. She frowned. "But he's already riding east with the Red Lector." She walked to Ferdinand's side and looked down at the tablet he crouched before.

He nodded. "The message is to his second in command, some captain whats-his-name. Who cares? The message was to be relayed to the General, according to the log."

"What did he say?" Ilsa peered down at the screen.

"Not so fast." Ferdinand quickly shifted to hide the screen from Ilsa with his back. "I want you to promise to let me go before I share."

"That depends. Why were you here in the first place? Something tells me you didn't come here to help me spy on the Red Lector's general."

Ferdinand took a deep breath. "Maybe Chollush was right about me being a thief. I'm here to skim some funds from Palend's account before I head east. Dalite credit can be useful in Chogrum, you know."

Ilsa frowned. "I believe you. If it's just money, I can let you go."

"Good." Ferdinand smiled. "You're very reasonable, especially for a priestess."

"Alright. Alright." He shifted so she could see the tablet.

She read the transcription of the digital message from the screen. Her lips began to murmur the words as her gaze moved down the screen.

"General Kanan should know that I have his back against the Red Lector. When the time comes I will see Haram beaten, one way or another. Tell him I'm happy with his performance last night, and I think I played my part for Haram to put more trust in him. I may not pay homage to your religion but you may trust my alliance with your Gray Lector. One last thing. Be careful should you choose to move too soon. An honor bound priestess of Hathani is traveling with Haram at the moment. I have a feeling she may interfere though I cannot fully predict her actions. Please inform the general. Respectfully yours, Lord Chakeb Palend."

Ilsa scowled. "Lord Palend is working with the general? But he threatened to kill Palend last night."

"Looks like it. The general must have been faking."

"But he connected with someone who worked for a Gray Lector. Ayoch has five high-up Lectors, right? Each one named for a color?"

"Yeah." Ilsa's breath caught and she paused with realization. "But none of them are called Gray."

"Yeah," said Ferdinand. "Looks like they're planning something against the Red one." He yanked the pin from the plants, leaving a small hole in the bulb he had stabbed to access the memory of the pile. Without information to process, the tablet's screen immediately went blank, showing the pattern of a leaf beneath the glass cover. He stuffed the device into his saddle bag and turned to Ilsa. "Time to go. Good luck."

"Thank you, priestess. Hope your friend is alright."

Ilsa nodded. "Blue should be fine. But she'll need a day or two of rest. I was hoping Palend would let us stay here."

"Then you've got one more problem. Thanks to his sentry's logs, Palend's gonna notice I was here, even if you let me go."

She frowned at him. "Do you have any ideas?"

He nodded to her. "If you look like you tried to stop me, he'll definitely let you stay."

"You're right." She clenched the grip of her pistol against her palm brand.

"We'll look like we fought." He extended one arm away from his steed. "That work for you?"

She frowned. Deceiving Palend would not have felt good just an hour ago, but he had deceived her and Blue, if only for an apparent personal vendetta against the Red Lector. She took a deep breath and then nodded to Ferdinand.

He smiled. "Good doing business with you." He produced the steel lance in a flash. The edge of the blade sliced along her outer thigh.

Ilsa gasped with pain and thrust her arm out. She fired her pistol skyward. The gunshot roared and Ferdinand's lance slipped back into his bond. He leaped onto his steed and rode out of the garden and toward the gateway.

She looked down at her leg. Blood ran from the cut in her slashed pants, shallow, but painful. She swayed, dizzy, and then started to limp after Ferdinand. She would tell Blue the truth, and they would make plans on how best to talk with Lord Palend. She blinked at the pain and kept limping forward.