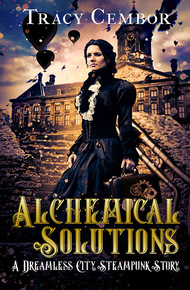 Once upon a time there was a girl who read too many books and played too many video games. She grew up and kept playing games. Tracy Cembor is an Amazon bestselling author of steampunk and fantasy novels. She also reads fairytales, wants a clockwork horse, and plays make believe. She lives in the Southeast with her family and dog, Reno.

…the Gaslight Carnival has it all.

They also have her brother. What will Margo do to get him back?

In an unlicensed Alchemy shop surrounded by Victorian finery, Margo sits. The money in the bronze-buttoned till is every shilling she's saved. Will it be enough to buy her twin brother's freedom?

Come one, come all, to see the show.

The Ringmaster's velvet coat is nearly as loud as her banter. She draws them in and fills the seats. Under the red and white tents a cornucopia of glorious oddities, magicians, and high wire acts. Anyone can buy a ticket, but can they afford the price?

Three days only, the Gaslight Carnival comes to town.

The Ringmaster took her money, but her brother's price is higher still. Margo must become a contestant in the carnival's cruel games. The clock is ticking. If she doesn't win, will they ever escape?

The gaslight carnival glowed in the nighttime fog. Thick tendrils drifted up from the maze of canals that provided water and power throughout the Steam Meister's metropolis, Rivenloss. She paused on the crest of Smelters' Ferry Bridge, surveying the transient show that provided three days of entertainment before moving on to another district in the expansive city.

The gaslights floated overhead, the glowing balloons the hallmark of the carnival. Filled with helios gas mined in the frozen wastelands, it had fascinating properties when heated, including its luminosity and atmospheric buoyancy. The gaslights cast their multi-hued glow, and strange shadows lingered in between the patches of color that spilled across the ground.

More determined than ever to bring her brother home, she squared her shoulders and crossed the bridge.

A festive hullabaloo greeted her on the other side. A brass band was playing merrily. The smells of grilled skewers, fried pears, and salted popcorn beckoned to her. The midway was brightly lit by the gigantic gaslights overhead and lined with a chaos of brightly-striped tents, high-walled animal pens, and wood-plank venues for games and outdoor performances.

She surveyed the space between the tents, which were filled with carnies and carnival-goers alike, jugglers and stilt-walkers sharing space with strolling couples and dashing children. The first day of the carnival always drew the biggest crowds. Acrobats and fire-breathers caught her eye. Hawkers cajoled passersby to see the schilling exhibits, including the one the ticket seller had mentioned for the trained octopods.

She sensed eyes on her. Turning, Margo watched a wave of ragged children swarm out of the dark spaces between the midway attractions. They flowed around the carnival-goers like a wave of rats called from their colony by the piper's sweet song. Her breath caught as she realized with dawning horror that they were all scurrying towards her.

A waist-high moppet with curls and an eyepatch reached the her first. She held out a grubby palm. "Frankel for a song?"

A greasy-haired lad in striped leggings shoved the little girl aside. "Leave off. She'll give us all a coin if she don't want to be bothered none, won't you, pretty lady?"

"I want one too," another child said, tugging on Margo's braid hard enough to make her eyes water. Others pawed at her pockets and satchel, clearly of a mind to take the coins for themselves.

"Stop, these coins are mine," Margo said, clutching the satchel to her chest. She could not give up now. She had to stay strong for Leonard's sake.

"Just give us the money and we'll leave you be," the greasy-haired lad said.

The girl with the eye patch yanked on Margo's skirts. "Give me some too."

The children crowded too close, a mass of unwashed bodies. More were pressing in behind them, all reaching for her with grasping hands. "Please, get away," she said breathlessly, overwhelmed by the crush. "I don't have any money for you."

"Liar," one child shouted, which grew into a chant taken up by the others. "Liar, liar, soul on fire." Their smiles turned mean and angry.

"Stop, let me go, you ragamuffins." Margo pushed through the mob of children, desperately wanting to escape. The little girl clung to her leg like a barnacle, and Margo was forced to shake her off. She passed through the circle and broke into a terrified run, her tormentors howling as they gave chase behind her. She fled down the midway until she reached the darkness beyond the gaslights. She stopped, her lungs gasping for air.

The fog was thicker here. She still had her bag clutched to her chest, unable to unwrap her arms. She had to get the money to the ringmaster before the children found her and their terrible games started again. Her cheeks flushed as she recalled how she had run from the children, but they were selfish and cruel and would not understand how much the money meant to her. She was finally going to bring her twin brother home. Leonard would help make everything right again.

She heard a huffing sound behind her and her attention snapped back to the murky greyness enveloping her. The gaslights were too far away to burn away the fog and illuminate the tents and wagons around her. She heard the threatening sound again, and the hairs prickled at her nape.

Her path was blocked by a golden-eyed, grey-furred wolf, larger than any dog she had ever seen. It was not penned or chained, only a leather collar around its throat.

She opened her mouth and sucked in a breath to scream.

"Shhh," a gent's voice whispered behind her. "I wouldn't do that. He doesn't like it when the lasses scream."

He laughed softly, his breath hot on her ear. "A wolf? Of course he is, born and bred in the wastelands, but he's been a city lad for quite a while now. He knows his manners, what is off limits, such as gobbling up tender morsels like yourself, and where he can roam. Unlike you, who are back here in the boneyard, clearly uninvited."

"I got lost in the fog," she said, not wanting to admit that some children, albeit rather nasty ones, had startled her to dashing about like a dormouse. Turning to face the man but keeping the wolf in sight, she continued, "I'm quite happy to return to the carnival proper. If you could please call off your friend for me."

"I appreciate your cooperation, but it seems a penalty is in due." The man was tall, and his dark, shaggy hair nearly obscured his eyes. His garments were strange. A thickly woven pale shirt, bound with leather straps crisscrossed his torso and upper arms, the bottom part of the sleeves hanging nearly to his knees. She could not see his hands, only dark pants and boots laced up his calves.

Margo swallowed. "What kind of penalty?" She ran her fingers along the edge of her satchel, wondering what she could do to get out of here.

He grinned at her wickedly, the faint light glimmering off his silver fangs. "My friend might not like hearing lasses scream, but I do."