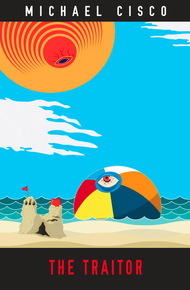 "Michael Cisco (born October 13, 1970) is an American writer, teacher, and translator currently living in New York City. He is best known for his first novel, The Divinity Student, winner of the International Horror Guild Award for Best First Novel of 1999. His novel, The Great Lover, was nominated for the 2011 Shirley Jackson Award for Best Novel of the Year, and declared the Best Weird Novel of 2011 by the Weird Fiction Review. He has described his work as "de-genred" fiction."

The Traitor by Michael Cisco

"As Publishers Weekly writes, “Cisco (The Tyrant) ups the ante for provocative dark fantasy by giving this coming-of-age tale a subtle metaphysical edge. While still a boy, sensitive Nophtha realizes that he's uncommonly empathetic and able to see the world from the perspective of others. Tutored by his uncle, Nophtha apprentices as an itinerant spirit eater, or someone who absorbs lingering ghosts that congest the surrounding atmosphere and converts their essence into formidable healing powers. One day, Nophtha crosses paths with his alter ego, Wite, a soul burner who hopes to evolve to a higher level of being by gorging himself on the souls of the living.” Things get worse from there. Recommended for fans of Clive Barker, Thomas Ligotti, Gemma Files, Kafka, Leonora Carrington and other masters of weird fiction. With an introduction by Jeffrey Ford."

I rise from my pallet like a sleepwalker and cross the cell to the table, where I am writing this. I lay there all night in a trance, my eyes open, my body completely stiff, as if I were dead already and not dying; the effort to move is all but too much for me, in fact, it is too much for me, and I cause myself irreparable harm moving about. I am no doubt shortening my life at this moment as I write. When one blows on an ember it flares and thereby perishes all that much faster. I don't pretend to be "flaring," but something in me demands that I leave at least these few traces behind, as testimony, not to myself, but to why I came.

It's cold. There's no light, or very little light. Being who I am I may see in the dark. I have shriveled to a skeleton, not for being in here, but for the bug in my lung that I brought in with me. A few days ago, I have no idea how long it's been, I felt it spread to the other lung. I was lying on my pallet and I felt a sudden click in my chest as the bug punctured through to the other lung, and now it's in both. From that moment on I started coughing more and more until now I cough more than twice as much as I did before, and I am certain I will never leave this cell, that is, not entirely. It is because things have become so urgent in this way that I have turned to writing. Once things have become hopeless, it becomes possible to write.

I've just done some coughing. Each cough scatters against the walls and echoes back at me seeming even louder than when I coughed it. I have blood on my hand where I held it up to my mouth, and I can taste blood. My blood has never had what could be called a strong flavor. As I cough my lung's blood into my mouth and onto my hand, my coughs cascade through the room and are swallowed up, one by one, by the spirits. I'm sure they dote on each of my coughs, bearing as they do the increments of my death. When I die, when I am finished dying, when I've exhausted dying or dying has exhausted me, they will swallow me up in the same way, the same way they swallow my coughs, but also the same way I used to swallow them—the way I would swallow them all up now if I had the strength.

I will write down now who I am and some of my story, not so that you who read this, if there is anyone there, may understand me, since, in any case, you can't understand me; there is no way my story could make you understand me. I'm writing my story to prove that I understand it, and I can't help repeating it over and over to myself simply because that is all there is left of me. I favor it more for the useless details that remind me of how I used to be, not that I miss anything. Now I am nothing at all like I was, although I believe I am now what I had originally intended to be.

I write this first so I may arrive at my testament through these memories, as I arrived at where I am now through these times I'm remembering. If I don't write beautifully, it's because I'm trying to be honest, and because the taste of blood in my mouth reminds me how little time remains for me, how little time there is to polish words.

I must begin with my uncle, my uncle Heckler, who had far more influence on me than my parents or brothers and sisters. My family was very large; I was lost in the middle. No one in my family liked my uncle Heckler, in fact, my mother and even my father, whose brother he was, detested him, but, since he was the only one of my relatives with any money, they had to put up with him. He looked nothing like my father, and was older. I remember he had a goblin's face, especially then, when every feature was absurdly elastic. He would grin, and it looked as if his mouth were going to stretch across the room. He grinned at everyone. He was also very nearsighted, and grinned at things as well. I realized he greeted everything he hated with that grin. There was also something womanish about his face, something that my father found especially disgusting. He looked exactly like his own father, while my uncle Heckler looked much more like their mother, who had abandoned the family. The last straw, or what would have been the last straw had my family not needed my uncle Heckler's money, was that my uncle Heckler had, at a young age—but not so young an age that he could have impulsiveness as his excuse—joined the apostates. This made him an object of hatred both for my family and for the whole town, and placed him among a tiny religious minority within its walls. My uncle Heckler had to live apart in the town center, and I remember that, whenever he came to visit, he had to spend about twenty minutes outside our door, battering the dust from his shoes with his shapeless, loathsome old hat, before my mother would let him in.

My uncle Heckler took to me right away. He was always charming to my sisters, but even I could see that his heart wasn't in it. He grinned at them. My brothers didn't merit any attention as far as he was concerned. But I, for whatever reason, appealed to him, and my parents were glad to have someone to watch me. I was never large as a child, although I grew up bigger than the rest of them, and my brothers, even my younger brothers, liked to drub me. My uncle Heckler noticed me because I kept to myself, and because my parents didn't like me. My father beat me constantly, several times a week, but there was no getting used to it. He would stand in front of me, holding me by the collar of my shirt, and slap my face, first striking my left cheek with his open palm and then, reversing the direction of his hand, striking my right cheek with the back of his hand—as a result, my left cheek would sting more and more sharply while my right cheek would ache and throb, turning numb, and often my nose would bleed. Almost all my first teeth were knocked out of my head this way, when they loosened, they would fly out of my mouth as my father beat me. Occasionally I would lose my footing and tumble to the floor, and this would irritate him, and he would drag me to my feet with one hand and beat me all the more severely. I could always tell when he was about to beat me, because his face would go white, and his features would turn blank, and my mother would leave the room and lie down. I would stand there with my face uplifted, seeing only his implacable face, and soon I would lose all sense of my surroundings, until I was only my face, being struck with the regularity of a pendulum, at which point things to my view would become dark and colorless, until he released me.

When my uncle Heckler saw how much more frequently I was beaten than my brothers, he must have felt an affinity for me. He and I had both been, even from the very beginning, completely rejected by the world, and deprived of the world in every way. Having joined the apostates, my uncle Heckler was despised by the whole town, there wasn't a single person in the whole town who treated him honestly, he was swindled constantly, he was knocked aside in the street, he was harassed by young children, rocks and slops would come his way, and sometimes drunken men would shout at his house and the houses of the few other apostates in town. But the apostates enjoyed, if that is the word, official protection, and that set a strict limit on the amount of misery my so-called country men were able to impose on them. My uncle Heckler's affinity for me had been lost on me completely, until one day, by that time he must have seen what sort of person I was turning into, when his sudden arrival at the house saved me a thrashing. I recall he had come to talk to my father about money, and my father was positively seething with hatred for my uncle Heckler. I had wanted to leave altogether, for fear that my father would take this out on me, but my uncle Heckler, having concluded his business with my father, asked if he might take me out for a walk. My father, who was by that time completely overwhelmed with impatience, and, I'm sure, prepared to approve of anything that would rid him of my uncle Heckler more quickly, agreed. My uncle Heckler did not say anything much to me as we walked about, and we didn't walk more than a few dozen yards up the street. My uncle Heckler then stood and waited, and I, completely confused, waited with him. Eventually, my father left our house, as he did every evening, to play cards with his friends. Then my uncle Heckler brought me directly back to my door and sent me inside without a word. My uncle Heckler sent me back inside once my father was safely away. He would do this for me a number of times.